This is Part One of a multi-part story.
The Other Parts:
Part Two
Part Three
Part Four
Part Five

Four years ago, I was travelling on a boat with a guy who was writing a script. His beautiful story was, in part, about an older gentleman wanting to find a good home for his boat. In early July, that same basic plot happened to me. Some money changed hands, but so little he basically gave me a boat.

When I decided that I would stay in Michigan through the summer this year, I bought a daysailer and have been keeping it at a dock on Muskegon Lake. As soon as that boat was in the water in late May, I was sailing as often as I could; reconnecting with sailing. Twelve years ago, when I planned my escape from the rat race, I meant to spend my time sailing. Instead, I have been working on boats. The first boat was a project, the second sailed but was a little small, and the third, my Westsail in Florida, was a major project. Sailing the little daysailer here in Michigan had returned me to the simple, robust joy of wind and water.

It had been a hard winter and spring and sailing was my therapy. I came back to Michigan in October to help Mom and Dad through some health issues. My sister is right nearby as well; I just came to help as much as I could. Mom lost her fight in April and since then we’ve all been trying to get our bearings again; especially Dad. I had committed to being here until the fall before going back to my boatwork project, but I was looking at my life in a different way.

I’ve been hanging around a non-commercial small boat sailing discussion website for at least fifteen years. The last week of June, Kurt, who runs the site, posted about a boat that could be had cheaply. The key paragraph stated: “local fella, getting older, doesn’t use boat anymore, looking for someone who’ll give her a good home and usage to take her away.” I ignored the ad for several days. I had enough going on with a big boat project in  Florida and a little boat in Michigan; the last thing I needed was another boat.

The Fourth of July holiday was to be an epic sailing weekend. My camper van was set up and I was headed to the lake to just stay up there and sail and sail ... and sail. That first day out I sailed all morning long.

And I kept thinking about that “local fella” and his boat.

If I could work into a deal where I had a boat that was almost ready to sail, one I could polish up, set up how I wanted, and start the vagabond sailing life I wanted -- why wouldn’t I? How could I not?

The boat is a Bayfield 29. It is not near the badass ocean boat that the Westsail is. And while I think that what makes a boat a bluewater boat is 40+% the skipper, the Bayfield is not a boat to take around the world. The Westsail could, and has, gone anywhere a decent skipper could take her. I decided that I could handle that compromise if it meant I’d be sailing sooner rather than later. The U.S. East Coast, Caribbean and Central America are all still comfortably at play. I really want to voyage to Ireland and Scotland, and I think that after some experience sailing her, the boat and I could consider making that trip too.

I sent a message to Kurt just before the Fourth saying “If that boat is still available, I’d like to talk to your Bayfield guy.” Before the weekend was up, I got Kurt’s reply that he was checking with his guy. Just a few hours later, I had the owner’s contact information.

I talked on the phone a while with Don, and had a good feeling from the start. He figures, in the last 12 years or so, he’s got $30,000 in the boat. After talking about his boat, and boats in general, I asked him what he needed out of the boat and how creative he wanted to be. He named his price; less than what I spent last year on boat storage. Any less and he thought he would feel like he was paying me to take it. I had a quarterly bonus coming and I could sell the camper van I had just inherited, but Don wanted to be able to use his dock. He had three boats but just two spots on his dock; one taken up by the sailboat that he didn’t use anymore. I wasn’t going to be able to leave her there for long. My plan to cobble the money together wasn’t going to work. 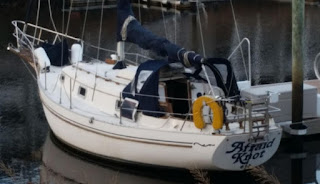 The chance to leapfrog over a bunch of boatwork and start sailing many months sooner I thought I would was too enticing. I checked with Dad if there would be any hard feelings if I sold the camper van that I had so recently inherited. And then he and I worked out a deal to front me the proceeds from selling the van so that I could grab the boat deal before it was gone.

All along I had some days off on the calendar to go to Florida and check on my project boat. Instead I was headed to South Carolina to pick up another boat.

And that’s when the adventure really began …
===

This is Part One of a series.
The Other Parts:
Part Two
Part Three
Part Four
Part Five
at August 04, 2019