Bow to the Grindstone 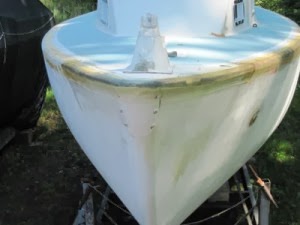 Hoorah! The gunwale is completely glassed!! Last fall it got too cold to work with epoxy before I was able to do the last five or six feet of fiberglassing. What I had left to do was also the trickiest part; right at the bow.

I glassed four layers today. It was so hot that the epoxy was kicking off before I could have a drink of water and admire my work.  At the bow, I had to cut pleats in the cloth and carefully wrap it around the multipe curves and angles.  It was a little like trying to iron a shirt after you'd already put it on. 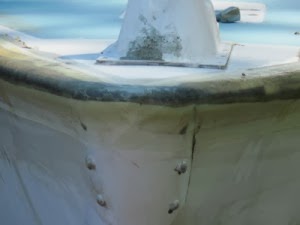 A little more sanding and the gunwale will be complete. Then . . . . wait . . . . more sanding!! The rest of the hull will be prepped and at least the primer coat will go on. It is so much more fun when all the hard work leads to actual physical improvements. I can do this!!!!
at June 18, 2012 No comments:

Swab the deck, oil the teak! 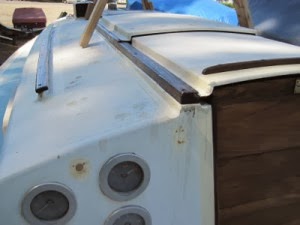 Today was a bit of a lay day. Just as I was rolling in to the marina, a good friend called and came by to see the boat and visit. It was pretty hot, so we ran into Douglas to the Respite Coffee shop for an iced Americano.

Earlier in the week, another friend stopped by the boat. Sometimes it takes giving a tour to notice the obvious. I hadn't oiled my teak in about 18 months. So, I broke out the tung oil and mineral spirits and went about it today. It was almost like having a real boat instead of a project. I was making her prettier instead of building or tearing down. A nice relaxing day, but a necessary accomplishment as well.
at June 15, 2012 No comments: 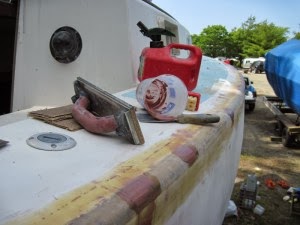 'Fair to Middling' is a phrase from farming to describe a range of quality of animals and produce. The loosely defined grades were 'good', 'fair, 'middling', 'ordinary' and 'poor.' So 'Fair to Middling' was in the middle leaning toward good. 'Fair' by itself, is also a verb - to smoothen or even a surface.  I got a little obsessed fairing the radius I'm working into the gunwale of the boat.  Obsessed in the best possible way.

Back in 1992, when Disney's Aladdin movie came out, the Ringling Bros. & Barnum Bailey Circus which is based in Sarasota, was using an Aladdin theme at their souvenir tables. The vendors wanted minarets and they came to us - a small plastics job shop in town. I built the mold for the onion top part of the minaret. The minarets were molded in halves which were then put together and stuck on top of a section of 12" PVC pipe with an Arabesque window cut out of it. The whole thing was topped 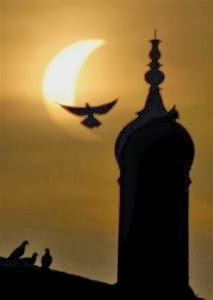 off with a fancy finial the circus people made; that included a door knob as I recall.

The difficulty came in the phrase "put them together." The two halves had to have the exact same contour on each side for them to fit together in the three dimensional minaret. I made a backbone and ribs out of carefully cut pieces of plywood and then filled and shaped with bondo. After getting a rough shape, I made a template to check the curves and carefully sanded and filled until the minaret was completely symmetrical. It was this obsession with symmetry that hooked me again.

I could only imagine, sitting at the tiller while crossing an ocean, during the second week at sea; among the albatross and the whales, my brothers;  with the deepest bluewater from horizon to horizon; and all I can do is stare at this little skip in the curve of the gunwale where I had done my repairs. So, I sanded and filled, and sanded some more. Then I carefully sanded by hand, filled the low spots, and worked the high ones. There is sixty five feet of gunwale down the port side, across the stern and back forward to starboard. I was making about 15" an hour and having to make two passes.

Then again, it damn near looks like it was built that way now. I have to say that it is coming along nicely - slow like sculpture - but nice.

Just in case you missed the musical allusion above. OK, the dolphins can make me cry.