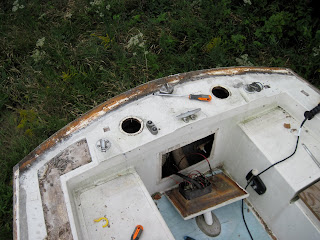 I'm starting to think that they built this boat without even considering that someday someone would take it apart. All the deck hardware, save for a few items at each end, has been removed.

The removal of the stanchion bases just about killed me yesterday. Contorting into spaces and positions that my old muscles were not intended for. At several points I was holding on to a ratchet that was slipped on to a nut I could no longer see, while reaching outside as far as I could strain against the porthole, holding a screwdriver in a pair of Vice Grips so I could reach the slot on a bolt that was six inches beyond the reach of just my arm. I didn't do any boatwork today. Tomorrow, if it doesn't rain too long, I'll begin grinding a small radius all along the sheer for glassing the Hull/Deck joint.
at September 18, 2010 No comments:

End of Summer Wrap Up 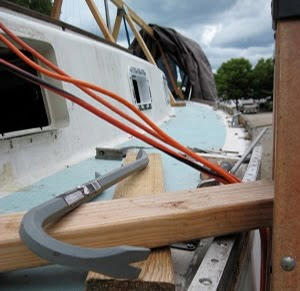 Whoever thought that my Trucker Tools would come in handy while working on the boat? The Rub Rail and the Toe Rail have been removed from the gunwale. Some of that work was with a crowbar. The deck is the current big project. I am working on backing the deck hardware [backing plates from previous post], patching some defects, replacing the cockpit floor and glassing in the Hull/Deck Joint - though not necessarily in that order.

Since early June, I've been driving part time and working on the boat full time. It turned out to be a great Summer to be a part-timer. I had the privilege of being able to pitch in and help with some family things that came up as well. There were several projects needing more time than money that I completed and scratched off my list. The list is still long, but the time spent this Summer will help to increase the possibility of getting the boat wet next year [the sound you hear is me rapping on the nearest wood]. 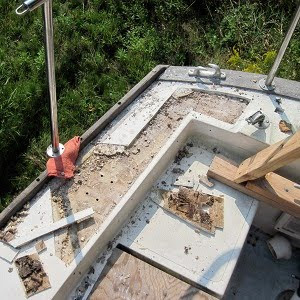 There were, of course, some surprises along the way. The damp core in the Aft Starboard Quarter, while still small, was about twice what I had thought [pictured right]. Other surprises were simply added to the To Do List. The cabinetry in the galley came out to reach the port side jib car track bolts. The main cabin actually seems roomier without it. So now, I have new plans formulating for the galley. 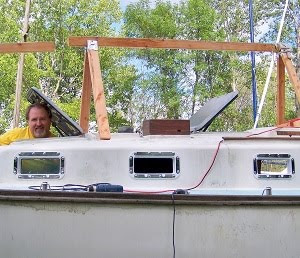 The portlights are in and are quite nice. They were worth the trials and tribulations of the the install. The cabin is much more watertight. In the Spring I'll have to finish by replacing the two larger ports.
at September 16, 2010 No comments: