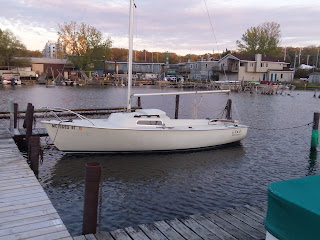 There’s an old joke about a preacher who loved golf. After a couple rainy weeks, he was itching to get back out on the links. When he realized that the first nice day in weeks was a Sunday morning, he faced a quandary. Ultimately, he decided to call in sick and have the head lay speaker take his place. As punishment for this transgression, God gave him a hole-in-one on each hole. So, of course, he couldn’t tell anyone about his glorious round of golf.

I faced a similar situation on my second day out on Lola. The first day out involved some tribulation that I’ve written about but will submit that bit to a magazine (I’ll keep you posted).  When I went out again on a Sunday, I was out to redeem myself. The wind was light and the weather was just warm enough to enjoy the day. I readied Lola’s lines and sails and pushed her out of the slip. Lola had only a canoe paddle for auxiliary propulsion at that time.

In mid afternoon, I paddled out of the marina basin and set about to raise the main. Lola is still new to me so I haven’t perfected all the little bits, like raising the main. As I fiddled with the main and got the sheet tangled with the tiller, we drifted a little close to shore; a point that juts out between marinas. So I paddled some more and then managed to get the main most the way up, but not quite tight.  I ended up sailing slowly back across the front of my marina with a little slack at the clew. 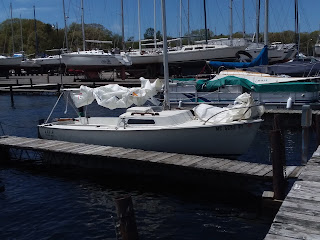 This wouldn’t have been so bad, but for the two race crews that were coming in off the big lake. These big, sleek boats ghosted by as I tried to sail myself out of trouble with a sagging main. The crews, in their matching shirts and expensive watches, barely deigned to glance in my direction. I smiled and sailed on in a boat that cost a fraction of what their boss spent on rope -- or shirts.

I like to think I don’t wear my ego on my sleeve and I was just out enjoying myself. Lola got past the marina and all the hazards sticking out into the lake, to a spot where I could fix the main and raise the jib. From the far southwest corner of Muskegon Lake, I turned Lola’s bow toward the city and we had a glorious afternoon sail.

We sailed east toward the Milwaukee Clipper ship museum, then back toward the State Park on the north shore and down into the corner again. In Bluffton Bay, I dropped the main well upwind of my dock, flaked it roughly and tied it to the boom. In the gentlest of wind, we sailed downwind under just the jib directly toward the east basin of Torresen Marine.

In the basin, I untied the jib halyard, hooked it under a horn of the cleat and sat at the tiller keeping the jib taut. We crept along the pier ends until we arrived at mine. I let go the halyard and doused the jib with the downhaul. Lola traced a long, round circle and just as she nosed into her slip, I walked up to the bow, grabbed the bowline and stepped onto the dock. In my head it was like nailing a landing off the uneven bars at the Olympics. It was beautiful. Effortless. Graceful.

And as I looked about, ego smack dab on my sleeve  …  there hadn’t been a soul there to see it.