Frank Perkins and Charles Chapman were working on a high speed, lightweight diesel engine at Aveling and Porter, a British agricultural engine and steamroller manufacturer when the company went out of business. The two engineers were convinced of the potential for diesel engines - a new technology in the early 1930s -- and started F. Perkins Limited in June 1932. The company became Perkins Engine Company Limited, is still producing diesel engines today and is now a subsidiary of Caterpillar.

After World War II, Perkins found they needed to make smaller engines to fit the smaller post-war cars of Great Britain. They successfully began a period of development and technical advancements in the 1950s that led to their engines running a variety of cars and delivery vans; even an Alfa Romeo. The venerable 4.108 engine came along in the latter part of that decade and found success in the agricultural equipment sector. At one point, a 4.108 was installed in a VW Transporter leading to a three year contract for a slightly larger engine while VW developed their own.

In the 1960s the marine business discovered the 4.108 and the engine’s real legacy was established. Between 1958 & 1992, 500,000 4.108s were made; many tens of thousands found in medium sized sailboats of the era. One Perkins powered Francis Chichester’s round the world Gipsy Moth IV; the first solo
circumnavigation along the old Clipper Route. The last contract Perkins filled for the 4.108 was for auxiliary power to run the air-conditioning in British Tanks during the Gulf War.

Used everywhere from tractors and agricultural pumps to British tanks and sailboats, the Perkins was known for its rugged durability and reliability. I crewed on a boat where the owner had spent nearly half again as much as he had paid for the boat to resurrect the boat's Perkins engine rather than replace it with a newer one. We pushed that engine hard all the way down the East Coast and it never even hiccuped. I kind of joined a cult on that trip. I now own the same brand sailboat and I found a Perkins 4.108 to power her.

When I found the Perkins it was too early for my project, but it had been lovingly rebuilt as a hobby project. It was torn down, cleaned up, individual parts painted or replaced, and rebuilt with new gaskets and seals. All that and it was only $1500 more than the rusty, dusty Perkins I’d have had to rebuild myself. And I suck as a diesel mechanic. I jumped on the deal and arranged for the engine to be stored here at the marina. At the time, I thought it would only be several weeks before I could get at the installation. 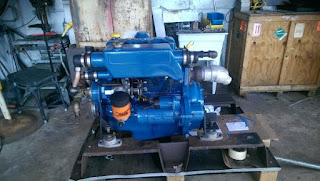 Fourteen months and two hurricanes later, we are measuring the engine bed to finally get my Perkins 4.108 installed. The poor thing started out just in the door of one of the shops here, but was then moved out under a carport-type of shed. We had no direct hits last season, but hurricanes Irma and Maria came close enough to strongly affect our weather. I had been stopping by infrequently to oil any bolts or fittings that had got the stain of rust on them. There was a panic when I had removed the transmission thinking it was best stored onboard Emma for the time. Luckily, I had told one of the ladies in the marina office so when the marina guys started puzzling about the missing trannie she settled them down. My engine hadn’t really been “put up” properly. Life got in the way and circumstances beyond my control caused a much greater delay than I had imagined.

Part of the delay was that Emma’s engine space had been stripped and used for storage. I had to purchase, install and plumb two fuel tanks; purchase and install thruhulls; buy a sea-strainer and all the 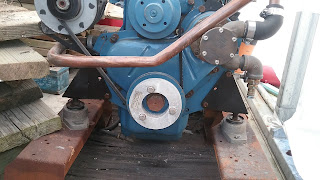 plumbing bits for raw water, fuel etc. But Emma and I are nearly ready. Recently, I had tried turning the engine [reminder: I don’t know what I’m doing] and was nearly distraught that it felt stuck. I didn’t [and don’t] have any idea if there is a spectrum between “stuck” and “siezed.” I had gotten a great deal, but had still spent a pretty penny on the engine. Many depressing thoughts of expensive repairs or starting over with a new engine were spinning through my brain. The marina folk had a simple idea: we should start this engine of yours before you spend the money to install it in your boat. Brilliant. However, the marina mechanic was backed up and it took nearly a month to hear from him. Just enough time me to start thinking that the reason I wasn’t hearing from him was that the news was so bad.

The best possible news has come!! This last week, Walton, the engine guru, started my 4.108 just fine and ran it for half an hour. He replaced a couple minor parts and has a plan which I have approved. The projects that were giving me the most nightmares all relate to installing the engine. Walton is going to
measure the bed for an adapter, install and align the engine, test the driveshaft for length and straightness, and find me a proper propeller. Yes, it’ll cost more money than if I tried to do more of that myself, but it will be way less time. And rather than learning by trial and error, I will be learning by hanging out a bit with Walton as my engine gets installed. I will plumb all the raw water and fuel lines and wire up the control panel, but I’ll have him come check my work.

My #svEmma project has felt like it was caught it in the doldrums, not moving forward, but now with some positive news and proper forward motion I am super excited and just feel much better about everything. Life is frikkin good.