The Traveling, Part II: Headed Back 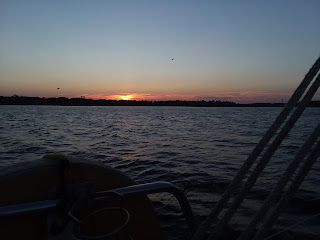 After a mystical night of stars at anchor, Monday was the day to finish the mission. Cape Fear Boat Works was a few hours up the river. I had told them I’d arrive about midday. All I had to do was motor up past the port facilities, past the USS North Carolina ship museum, and turn left. The Cape Fear River splits off to the west while the Northeast Cape Fear River goes on through downtown Wilmington and off to the -- you guessed it -- northeast.

However, when I tried to start the engine, the battery was dead. Likely, the little solar panel that I stowed inside had drained all the battery. When sun is not going in the battery from a panel without a blocking diode in the cable, a solar panel can suck juice the other way. It was time to call Towboat/US -- again. Three calls in three days must be some kind of record for a new policy. Towing insurance was the best money I ever spent. A Towboat/US skipper came out in the bright light of a Carolina morning and gave me a jump start. Those will be replaced when I come back to work on her.

The rest of the trip was uneventful. I cruised by Wilmington’s Port with ships, tugs, cranes, containers, and all kinds of equipment. After I got to downtown Wilmington, the ship museum was indeed on my left and I turned up the tributary just past it. The boatyard is a couple miles up the river from Wilmington; through acres and acres of sawgrass. It was like cruising back in time; especially when I got to the ancient bascule railroad bridge.

The bridge is normally closed and opens on demand. I circled around below the bridge while trying to reach the operator with the same damn radio as before. Finally I saw the guy saunter across the bridge to lower a gate on the other side. Then he sauntered back, while I still circled slowly around and around. The bridge mechanism started to creak and pop and complain. Finally, the two massive concrete counterweights quivered and started their slow descent.

A bascule bridge is a one-sided drawbridge. As the bridge began to open, I circled around one last time and then goosed the fuel lever to power under the bridge. I waved and shouted ‘thanks’ toward the blank looking operator’s tower.

I called the boatyard to let them know I was under the bridge. Less than a mile and the yet-to-be-renamed boat and I would be getting hauled out. As we approached the slipway, the boatyard guys waved me right in. I cut the fuel, shifted into neutral, and ghosted. The guy on the travelift raised the inward canvas strap and caught my bow like a child running into their mother’s arms. We were there. 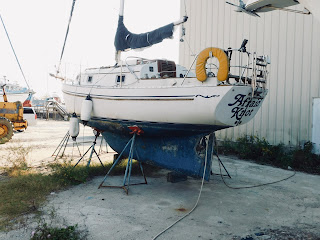 The boat was hauled out and the yard set up for pressure washing the hull. The travelift guy turned out to be the owner of the yard. Sam and I chatted as we walked up to the office. I filled out some paperwork with Amy. She said she’d email me the bill. Sam even gave me a ride into town so I wouldn’t have to pay a cab.

On the way, Sam talked my ear off. He was a college champion baseball player, hometown mover and shaker; and had once tried to buy the Southport marina where I had crashed (literally) Saturday night.

The motel I had picked out online didn’t look like it survived the last hurricane, so Sam took me down the block to another. I settled on a cheap but well kept Quality Inn. Now, I live for sailing but I have to tell you: that first shower -- first in four days -- was glorious!! So good that I took two more by the time I left in the morning. I had to be chilled out and scrubbed up because the next day was bound to be another exciting travel day.

I checked in with my cousin Sherry as I was going to try and fly standby again to get home. The flight looked OK, but since I didn’t depart until early afternoon, we agreed to check in the morning. Next door to the motel was a large convenience store/gas station and beyond that an Arby’s. Though I’m usually plant-based, Jimmy Buffet’s “Cheeseburger in Paradise” was ringing in my ear. So I hiked over to Arby’s, got a couple roast beef sliders AND a turkey sandwich. On the way back the convenience store was too much a temptation. I went in for junk food desserts, big bottles of water, and some snacks for the flight tomorrow. There was an historic Wilmington seafood restaurant across the street and down a bit, but I just couldn’t get up the gumption to go.

In the morning, Sherry informed me that the flight from Wilmington to Chicago, with a layover, was probably not going to work. She had found a flight that looked good but out of Myrtle Beach. I found a minivan airport transport company nearby and booked a ride. It was an hour and a half down to Myrtle Beach. The driver talked about his guns the whole trip. I just smiled and kept my mouth shut.

At Myrtle Beach, in the terminal, the gate agents were telling me the flight was well packed and they couldn’t guarantee I could get on. I found some coffee and a chair and got on Priceline.com. There was a flight into Chicago on another airline two gates down and about two hours after the flight I was waiting for. Priceline has a fantastic cancellation policy, so I booked the flight, leaned back and relaxed.

The flight started to board and the people lined up. They were quite a crowd. It might have looked grim, but I had my backup just down the hall. There were a couple young ladies hanging around the desk at the gate; obviously holding out for a standby seat. The crowd thinned out as the plane was filled and I heard the agent tell the gals that she wasn’t sure there was room; she had a list. She called my name and when I stood up, the two standby ladies hung their heads. The agent gave me a boarding pass and I was on my way [thanks, Sherry and Ed!!].

I stowed my gear, took my seat, and looked up just in time to see my fellow standby passengers had also got on. I gave them a smile and a thumbs up. As the flight attendants went through all the safety procedures, I got online while I still had airport wifi and cancelled my backup flight.

The flight was uneventful, and I landed in due course at Chicago O’Hare. There was plenty of time to get downtown and get on the Southshore Railroad, but I didn’t want to mess around. Haunting me was the fact that I had left my car in Michigan City in the wee hours Friday. The railroad website had no information about whether long term parking was allowed. When I had arrived there were no obvious signs prohibiting parking a while, but I didn’t know for sure. In addition, I had to get back to my car, if it was there, and drive back to Michigan to get to work at midnight.

I took “The El” into town, walked 4 or 5 blocks to the Millenium Station. Once there, I dropped my bag to rest my shoulder, bought a ticket to Michigan City and found a Chicago Hot Dog stand at the station. Before the train left I had a couple Chicago Dogs and a great big Diet Coke.

The students at Notre Dame call the Southshore Train the “Vomit Comet” because they take the train into Chicago to party and suffer the way home. The train is pleasant with comfortable seating and clean; no evience that ND students had preceded me. We lurched through down through Hyde Park, South Shore, South Chicago, Hammond, East Chicago, Gary etc. There was a stretch of wilderness around Burns Harbor and the Indiana Dunes before we got to the edges of Michigan City, where I started paying attention. 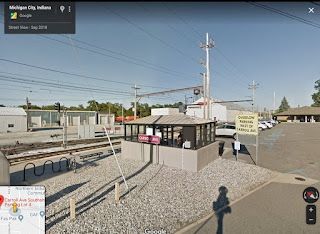 Heading east, the first station in Michigan City is 11th Street -- not my station. A few people got off there and the train wobbled through town to the Carroll Street Station where I had left my car. The moment of truth had arrived. I leaned this way and that looking for my car. We were coming into the station from the opposite direction that I had imagined. A little panic. A stretch. Another look. And there it was! I had made it and the car was still there -- and I still had time to get to work. I grabbed my bag, disembarked, and jumped in the car. It was two hours back home, where I laid down for about an hour and then went to work for an eight hour shift. It was a helluva travel day; all in the service of getting my new-to-me boat out of the water and safe during hurricane season.

The Bayfield 29 will be at Cape Fear Boatworks, on her own for a few months before I return. She and I will be there in Navassa, NC while I work to get her set up the way I’d like and back in the water. Basically, I only have a little bit more work than normal annual maintenance. She has a couple small blisters to fix, then a barrier coat and some bottom paint. I’ll also get a couple solar panels, new batteries, a better radio and a chartplotter of some kind; probably on a tablet. I also have my eye on using a Raspberry Pi computer to monitor the ship’s systems and eventually do navigation and some automatic logging.

In fact, since it took so long to get all these travelogs written and posted, I can tell you that I will be back at the boat before the First of December. Stay tuned.
at November 12, 2019