Going to Hell in a Bucket, baby.

I’ve still got a couple stories to tell, but skipping ahead to today, I wanted to show that some progress is being made. There were two projects I wanted to make some headway on today; the electrical system and the composting toilet. As always there were some trials and tribulations before I could get to work, but that is one of the stories that will remain untold for now.

The electrical system is a mess. Its already better, but nowhere near the capacity to power anything. There is an awful lot of Romex wire in the mix which would be fine if this were a cabin but is no good on a boat. There are four batteries onboard in three different types.

Wiring together different types or even different ages of the same type is not a good idea. Further, all of the lights and other electronics were wired direct to the battery rather than through a fuse panel. And, par for this course, these were wired to lugs on different batteries in the bank. I’ve disconnected all the wiring and jumper cables. Most likely, I will buy a couple cheap deep cycle batteries to get by on until I really begin rewiring the whole boat. All I really need, at this moment, is enough battery power to have running lights for 48 hours and the occasional use of the VHF radio. On a plus note, the solar panels appear to be sending out power; its just not going anywhere.

The real progress was made installing the composting toilet. This will also be a temporary installation to get me to my eventual home marina where the real work will begin. For now, I need to be legal to travel these water. The boat was advertised as having a composting toilet. This was partially true. There was a home built set up for composting aboard the boat. However, it was missing the bucket and a urine diverter. I don’t know exactly how the owner, two owners back, was using the composter he designed and built, but it wasn’t all there anymore.

I’ve been reading about composting toilets for a while and was going to put in a commercially built unit. Besides looking nicer, it was all there and instructions were be included. I bought a C-Head composting toilet and am super happy I did. Many of you know, I have a Bachelors Degree in Packaging. I was totally impressed with the well thought out packaging design when my toilet arrived. This is a small company still buying cardboard shipping boxes at Home Depot, but the care and forethought that was put into just boxing the toilet up to ship to me was incredible. Moreover, the directions are very detailed with many installation options.

My first task was to disassemble what I had. I had purchased 12v Portable Drill Driver/Impact Driver kit from Milwaukee and am really happy with the tools. Alex had bought the kit when we were working on Eleanor last spring. It seemed to do well. Back to the bucket cabinet, yes, the stir stick was still in there. Peat moss dust was everywhere. The open bucket design had its drawbacks. But I tore it down and cleaned it up. The toilet seat itself was just sitting over the hole with a lid that wasn’t even attached.


My C-Head went together well with an ease based on good, thorough directions. I fit it in place, marked where I wanted the brackets, drilled a couple holes for the hold-downs and in mere moments, it was installed. I had to use whatever scrap wood that was on the boat. Now I’m legal too.

The C-Head separates #1 & #2, which prevents the worst of the smells. The peat moss dessicates the solid 'product' which can either be further composted or disposed of. The liquid product is stored in cheap, ubiquitous gallon jugs or can be plumbed to a holding tank for pumpout when available. There is basically no plumbing and no need for a holding tank.
at March 07, 2016 4 comments:

When I first began to appreciate Anarchism, it was primarily because it felt like a finger in the eye of so many eyes that needed fingering. However, the more I read, the more it really does feel right to me. Furthermore, Anarchism is not the bomb throwing loner as cliched in movies and Saturday morning cartoons. Travelling this path, I learned about Emma Goldman. She was a radical, a feminist, and an anarchist in the early part of the 20th Century. Her writing and lectures spanned a wide variety of issues, including prisons, atheism, freedom of speech, militarism, capitalism, marriage, free love, and homosexuality. She was known for her activism, her writing and her fiery speeches.

I would have adored her for the following quote alone, but she brought such fervor and dedication to the cause, she is much more than just this. She said “If voting changed anything, they would make it illegal.” 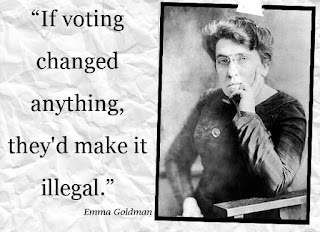 No one is perfect and Emma was involved in a plot to assassinate the manager of a Carnegie steel mill.  But she played a pivotal role in the development of anarchist political philosophy in North America and Europe in the first half of the 20th century. Emma was imprisoned several times in the years that followed, for "inciting to riot" and illegally distributing information about birth control. Eventually deported from the United States for her political views and activism, Emma died in her adopted home of Toronto, Ontario in 1940.

In 1908, William Marion Reedy published an article titled “Emma Goldman: The Daughter of the Dream” in the St. Louis Mirror. Emma commented that “no finer appreciation of my ideas and no greater tribute to me had ever been written by a non-anarchist before.”

An excerpt reads: “... “Freedom-absolute, unconditioned. Uninvasive freedom. That is anarchy. There shall be no constraint of law upon the soul or the body of man. There shall be no duties except one’s duty to one’s self. There shall be no modification of any right save a sense of and regard for the rights of others…There shall be no gods, no priests, no rulers, no judges, no policeman in the world she [Emma Goldman] would make over. And before the world can be made over all present institutions must be destroyed… By bombs? No. By ideas, by the new ideal of the sacred invasive privacy of man’s being.” 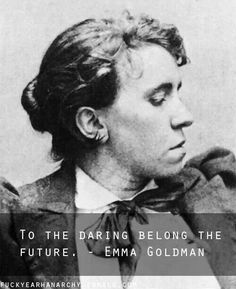 Another great Emma quote: "To the daring belongs the future."

I have decided to name my boat, Emma, in her honor. Emma is a sweet sounding name with a badass backstory. I can choose to whom I tell the whole story.
at March 06, 2016 No comments: