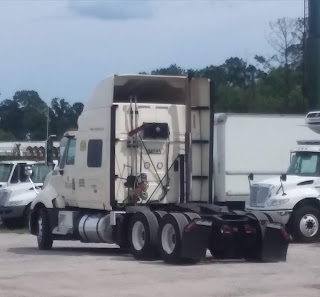 I am not a superstitious guy, but it has been really hard to not think the universe is sending me some kind of message this past week. I started driving again for a company where I had been before. The first truck I was assigned lasted two and a half days before I took into the shop and it didn’t come back out. Then I drove 350 miles in a second truck only to have it die under me. I've always seemed to have had bad luck with International trucks.

On Tuesday, July 3rd, I picked up a load at a Savannah, GA warehouse. I took the back roads around to a small Pilot Truckstop to weigh the load. The fuel desk lady said, “Just a minute” over the intercom, so I turned the truck off because idling is discouraged. After she came back on and we did the scaling routine, the truck never started again. I spent a couple hours stuck right on the scale itself, in everybody’s way. Eventually, I got towed off the scale and to the International Trucks dealer in Savannah. It was mid afternoon the day before the July Fourth holiday when I arrived, and despite being plenty busy already, they ran the computer diagnostics right away. Their computer told them the same thing that the truck’s computer had been telling me; there was an electrical fault somewhere, perhaps near the ABS module. There was a short, somewhere, but all the fancy computers were not equipped to say exactly where. There was no simple fix or replacement. This, the latest in my troubles with International Trucks, is pretty bad timing for trying to get ahead on the money for Emma’s refit. 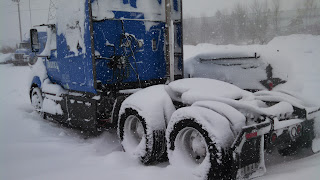 It was the winter of either 2014 or 2015, I was delivering truckloads of office furniture which often went to the Northeast; especially New York City and New Jersey. Whenever I had a load to Brooklyn or the southside of Manhattan, my load back to Michigan was usually huge rolls of paper from a mill on Staten Island. Many times before I had spent the night at the end of a cul de sac on Staten Island surrounded by the papermill, a defunct landfill and a power plant. That night it was about eight degrees and the bunk heater was just not keeping up. I started idling the truck, turned the heat up and fell asleep. About 3:00 AM, the truck woke me by dying. It would not start again. I called our road service people and they began looking for a roadside technician in New York City on a Saturday night.

The mechanic finally showed up, took a look under the hood and declared that the truck could not be fixed on the street but needed to get to a shop. Now my company had to find me a tow truck and another tractor to take the load home. Eventually, after I had been stuck with the whimpy bunk heater for eleven or twelve hours, a tow truck showed up towing a day cab. He dropped the cab, and pulled the dead truck out from under my trailer. I dragged the paper load back to Michigan with a motel stop because I didn’t have a sleeper. A month or so later, I came into Ohio from Pennsylvania in another International trailing a long line of grey smoke like a skywriter. That one couldn't be fixed outside a shop either.

After four days, me in a hotel and the truck in a shop, road service declared my truck dead for now. Parts are on order, but it will be out of service a good while. This morning I await a ride from another driver back to Florida to get a third truck -- third truck in 8 days! He just called to tell me that his truck won’t start and is waiting on a road technician. Our company has Macks, Internationals and a few Freightliners. I have my suspicions what kind of truck he drives. 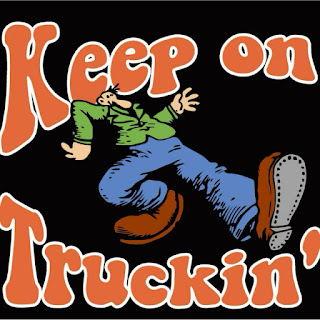