The Travelling, Part I


This is Part Two of a series.
The Other Parts:
Part One
Part Three
Part Four
Part Five

It’s an occupational hazard of a vagabond sailor to be travelling when you can’t really afford to. I was headed to South Carolina to buy a boat. My camper van is up for sale to pay for the boat, but Dad fronted me the proceeds so I could grab the deal … and I didn’t have a lot of travelling money. Further, I was taking a cousin up on her offer to help me fly standby. Sherry and her husband Ed had been longtime employees of an airline and got me on their ‘buddy’ program.

Thursday morning I headed to the airport in the wee hours of the morning. After I checked in with the agents at the gate as one of their standby passengers, I watched the room fill up with people. A flight had been cancelled the night before making this plane packed with people; frustrated people. I sat nearby and watched everyone board the plane. Then I watched a ridiculous family of four get turned away. They had arrived so late that the jetway was closed and locked. When I asked the agents if I would just get rolled to the next flight, they just looked at each other. I realized then that if I had been hovering near the gate, acting annoying, I might have gotten on that flight. They switched me to the next morning. Same flight. Same time.

I talked to my cousin on the way home from the airport. The next morning’s flight was tight but looked OK. Suddenly, I had an extra day off, so I went to see my Grandma; who is 101 and a half (and two thirds practically), sharp as a tack and a pleasant conversationalist. I hadn’t seen her in a little while because I was sailing a lot up at Muskegon Lake. Later I chatted with Dad too, but soon went to bed anticipating another early morning.

Some time after midnight, I rolled over, awakened and checked my phone. I never check my phone in the middle of the night. Sherry had tried to call and sent a couple texts. I work third shift and sleep during the day, so my ringer is almost always off.  Friday’s flight had tightened up and it was looking grim to be able to get out of Grand Rapids in the morning; just a few hours away then. I shook myself awake and got online.

I found an amazingly cheap flight yet that afternoon, out of O’Hare in Chicago. I booked the flight, checked the South Shore Rail schedule, and was out the door by 02:30. At 03:15, my alarm went off and scared the hell out of me. I was already 45 minutes down the road before I had actually planned to get up.

I hit Michigan City and jumped on the second South Shore train of the morning. We rattled into Millenium Station and I walked outside onto the streets of Chicago into a beautiful Midwestern Summer morning. Five blocks or so later, I hopped on the Blue Line out to O’Hare. It had been a blur of rushed contingencies, but there I sat; at the gate, with a ticket, munching on some tropical trail mix, with 45 minutes to spare.

After touching down at Myrtle Beach International Airport, I grabbed a Lyft ride up to Little River, SC where the boat was gently rocking at the dock behind Don’s house. The driver and I had to get buzzed in at the island’s gate, so Don was waiting in his drive when we arrived. The house was a gorgeous, perfectly tropical-looking home, all stone and spanish tile, on a canal with a jeep in the drive and a hot rod pickup in the garage.

We chatted a bit and went out back to see the boat. Don was eager to answer any questions I had but let me crawl around the boat; to peek into all her nook and crannies, check the rig, the deck, the bilges, and whatever else I needed to check before making my decision. He’s a low key guy like me and we got on well right away. Don gave me a Danforth anchor and some lines out of his dock box. We started the engine and listened to it purr.

Like any other used boat in the universe, she needed a little more work than my online rose-colored glasses had thought. Totally normal. Yet, I could tell that the boat had been well taken care of and -- most important to me -- she was basically ready to sail. This was not a project. My boat project in Florida easily has 8 or 10 more months and $8,000 or 10,000 to invest. Don’s Bayfield -- now mine -- needs just a bit more than basic annual maintenance work; and some updates and personal preferences like some solar panels and a new VHF radio.

Some money changed hands but Don was asking so little he was basically giving me the boat. I spent more last year on boatyard storage. He really just wanted to find the boat a good home and only asked that I not flip her right away.

I was prepared with a bank check and a home-brewed Bill of Sale. We walked back to the house to do the paperwork; past the perfect South Carolina ICW backyard deck with gazebo, pool, etc.  Don’s girlfriend, Deborah, with the precise timing of a wonderful hostess, came down from the main level with a couple bottles of ice cold water; just what we needed! We each signed both copies of the Bill of Sale and I handed him the check. The last detail remaining, Don and I had to run to the bank to get his North Carolina title notarized.

We had talked about Latitudes and Attitudes Magazine back when we first talked on the phone. Both of us had read it and appreciated regular guy perspective, absent of any yacht club pretensions. As we drove to the bank, Don asked me if I had written for the magazine. He had noticed my BubbaThePirate.com signature block on my emails and was remembering the regular Bubba Whartz columns. I assured him we weren’t the same guy, but that the column had originated in Sarasota where I had lived. I had been reading Bubba Whartz long before it was in a national magazine.

Don, being low key, let me tell him that I was going to organize the boat and then walk over to the grocery store and maybe to West Marine. I was planning on heading out in the morning. It was a really hot week in the Carolinas but I went to work cleaning up a bit and organizing the lines and spare equipment.

Then my phone rang.

“Is this Bubba the Pirate?” a now familiar voice asked me.

Deborah’s charming southern accent cascaded over me. “You are NOT walking to the store. It is too hot. In fact, you can take a shower downstairs when you’re done and then we know of a nice place for a steak or some ribs. After that we’ll go to the store, so you can get whatever you need. You just let us know when you’re ready.” 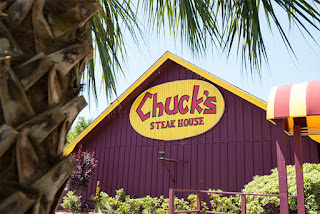 With an offer like that, it wasn’t long and I was ready. They took me to a popular spot in Myrtle Beach where Don & Deborah are regulars. We got a good table overlooking the ICW; their regular table, it seems. I imagine some of the people out front with their little blinking buzzer restaurant-waiting-alarm-things, wondered how we got in so fast.

We had a great meal and a nice chat. Afterward, at Walmart, I grabbed some toiletries that I couldn’t carry on the plane, and provisions for a couple days on the boat; including four gallons of water. With all that and my sailing dreams rolling around in my head, I prepared to sleep on the boat. It was a sticky Carolina night, but I drifted off, dreaming about red and green buoys, seagulls and pelicans.

This is Part Two of a series.
The Other Parts:
Part One
Part Three
Part Four
Part Five
at August 10, 2019