Grunting at the Rock. 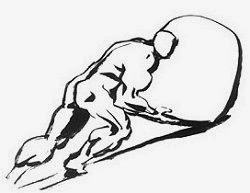 There is always something else to work on.  The boat project continues; lately more Sisyphean than Herculean.  On unseasonably sunny days, I've finished the fiberglass work at the gunwale.  When its been cooler and wetter, I moved to the interior.  The pilot berth on the port side of the main cabin has been removed.

A pilot berth is a bunk in which a pilot sleeps [duh].  A pilot, in nautical terms, is a person with the local knowledge to lead ships into foreign harbors or through unfamiliar rivers or canals.  On long passages, the pilot would need to sleep, but the Captain of the piloted vessel wanted the local expertise close at
hand.  Moreover, the pilot was not a guest who needed to be catered to or impressed.  Hence, the pilot berth was usually tucked in an unused space somewhere near the bridge of a ship.  Somehow, this tradition spilled over into pleasure craft. 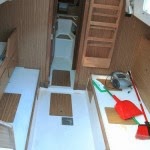 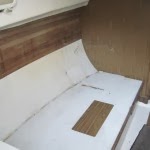 My Cape Dory 28, hull #53, is an early version that included a pilot berth.  In theory, the main cabin could sleep four.  One to starboard on a single bunk, two to port on a pull out double bunk and a fourth in the pilot berth above and abeam of the double.  We would have to be REALLY good friends for all that.  The pull out double is really a one-and-a-quarter.  In modern sailing, the pilot berth little more than a place to drop things rather than stow them properly.  In a seaway, anything dropped on that bunk would be cast to the cabin sole ['thrown to the floor' for you landlubbers].  Moreover, the cabin will be more comfortable, and more symmetrical, with some modifications to this area.  I'm going to move the existing face, with the three holes for drawers, back 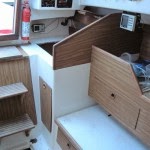 15" or 20", to create a shelf in place of the bunk with storage underneath.  The port side settee will be more comfortable this way as well. 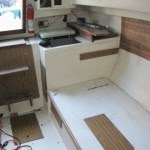 Poking around after Sisyphus came to mind, I found a short movie that I remember fondly.  Dad's career running REMC's at the intermediate school district level in Michigan afforded me the privilege of seeing lots of interesting and creative filmwork. When I was in school, Dad's office supplied the films and filmstrips we watched in class. Later REMC's like his supplied video tapes and then computers along with other educational equipment and programs. Back in the day, Dad would often bring home a projector and some interesting film. I can't recall if I saw this Sisyphus short through Dad or whether I had spotted it because I had developed a taste for short films through him. Click here to watch the very cool short "Sisyphus" by Marcell Jankovics, a Hungarian graphic artist and animator, who was nominated for an Oscar in 1974 for this very film.  Its not unsafe for work, but if your volume is too load, the soundtrack will make your office mates wonder what you're watching.

The Sisyphus image is a screen cap from the Jankovics film that I lifted without any permission from the "I Took the Liberty of Reading Your Mind" blog. The other images are before and after shots of my boat's interior taken by either me or my father.