The Update That Wasn't Going To Be From The Road 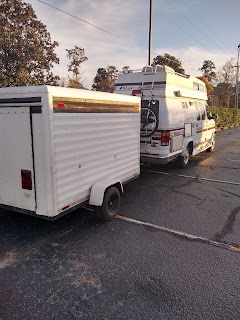 After almost 2500 miles of driving, I was finally in Wilmington; finally back where the boat was. I could finally get to work getting her back in the water.

Except that I was sick as a dog. All the way from Fort Pierce to Wilmington, I had only managed to drive a couple hundred miles a day. The last two nights I stayed in motels rather than boondocking in the van. My head was all clogged up and it was sliding down into my lungs. A couple years ago, a similar cold had taken up in my inner ear and I had ended up in the emergency room. I was fearful that that could happen again. And if I had gotten pneumonia and needed similar medical attention, I’d either have to activate COBRA from the job I’d just left or fund it myself. Either would be an expensive option.

I bought all the cold medicine I could think of and carried on. When I’d finally arrived at the boatyard, I had just enough energy to pay my December rent and then head into town for another motel room.

By Friday, I was feeling a little better but mostly I was just disgusted that I wasn’t at least next to the boat; ready to work. It was a roller coaster of emotion and frustration to finally be back in Wilmington and not be able to do any work. Leaving the motel, I wandered back to the boatyard and set up camp. It was hard to find a working outlet to plug in the van, but the furnace hadn’t been working and I was going to need my little electric heater. I unhooked the trailer and fiddled around next to the boat. 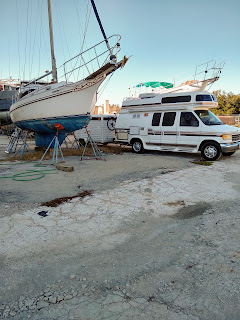 It wasn’t long and the late afternoon chill was coming on. Inside the van, I made some supper, read a while, and finally made up the bed. It was going down into the forties that night; which was a little better than the last couple. When I woke, I felt sicker than I’d been all week. The electric heater had barely kept up with the chill but had dried the air so much that I could hardly swallow. This was not going to work.

That night, and two more nights later in the week, were going to be in the thirties. I made motel reservations for those chilly nights and headed into town. I was so distracted and sick that I left my ladder unlocked and the extension cord plugged into the building on one end, the other end hanging on a jack stand. I picked up more cold medicine, some soup and headed for the motel bed.

The next morning I was just as sick. I paid for four more nights to bridge to my other reservation and hunkered down to stay. With the “Do Not Disturb” sign hanging on the door, I slept, ate a little, drank a lot of water, and sweated through the sheets without leaving the room for three days. When I began to feel just well enough to go for a drive, I headed back to the boatyard, retrieved the cord, locked up my ladder and decided to check out a marine consignment shop down by Southport, NC. I found a little celestial navigation gadget I couldn’t live without, but by the time I got back to the motel I had sweated through my shirt. Not stained with sweat, but soaked. The shirt might has well just come out of the washing machine. I was really sick of being sick.

Back at the motel, I started looking into the weather. There were more thirties coming in forecast for the following week. Weather history data made the situation look grim and I started to consider leeaving town Thursday morning another night in the thirties popped up in the 10 Day Forecast and my mind was made up. All indications were that the rest of December and through January nightly lows were going to be in the thirties and forties; daytime highs would be 40s and 50s with the occasional 60 or 62. The highs, however, lasted for about 45 minutes in mid afternoon. The average temperature was likely to be too low for paint, resin, or caulk; all things I needed to do. Winter days were short enough already but waiting for it to warm up and then quitting before supper was not a formula for getting much done. And what little I could accomplish would be in miserable weather regardless.

I had been waiting on a guy who was going to look at the van’s furnace. He is a mobile boat and RV repair service, but was having a busy week. He said he had an opening Wednesday afternoon and would try to stop by Monday to see if he needed to order any parts, but ended up not having time. By Wednesday, I was ready to leave town but really wanted to have him take a look. I didn’t have anything better to do than hang around anyway. Yet, afternoon came and went. About Six o’clock I finally heard from him. He was running behind on the previous job but still trying to make it to me. At quarter after seven, he texted that he was on his way. We met in the parking lot ... in the dark ... and the van furnace started right up and ran fine. The good news: I had heat. The bad news: I don’t know why I didn’t before. He graciously didn’t charge me a thing for the five minutes he was there.

In the morning, I started calling around for a campsite in Florida. Unfortunately, a good portion of the retired population east of the Mississippi was also looking for a campsite in Florida. The Savannas Recreation Area in my beloved Fort Pierce was full. A couple options I remembered from my travels were also full. Several spots I found online either only rented by the season or were hugely expensive. I just needed a spot near some groceries where I could stay put and read and write to my heart’s content without spending too much money. Then I remembered a place in Waldo, FL; north central, inland part of the state. I had fueled up many times and occasionally slept at the truckstop next door. They had a spot for me and it was very affordable.

The Dixieland RV Park used to be the Dixieland Music Park. Some of the infrastructure is still here. Their website even features pictures of guitar pickers and campfires. Sadly, either the musicians aren’t here yet or this genuine part of Old Florida is following much of the rest into the dust of memory. Actually, a fair number of my fellow campers are working people trying to, or having to, live cheaply [Murica]. Out front is the Classic Cafe, a breakfast and lunch diner connected to the campground. I’ve actually eaten there a couple times in my previous travels. Further, right across the road is a Dollar General with a surprising amount of groceries and just up the road from there, on Saturday and Sunday, is a Farmer’s Market. My mail service is about forty-five minutes away and I’ve been through here so many times when I was truckdriving in Florida that it almost feels like home. 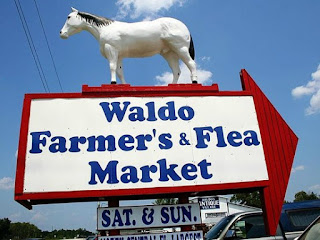 The Farmer’s Market is inside the Waldo Flea Market, which is now called the Waldo Farmers and Flea Market and run by second generation family. I managed to stop there a few times while truckdriving too. A couple vendors have quite a good selection of fruit and veg. There is also a lady there selling homemade salsas, chutneys and sauces. I can’t wait to try some of that out. The Flea Market is a trip; rusty, dusty Florida crackers selling rusty, dusty stuff to other dusty crackers.

I’ll be here through at least the third week of January. I have a few boat projects I can work on here and I’ll get some writing done. Most of all I’ll be tolerably warm and less frustrated. As soon as it looks like the weather is improving in Wilmington, I’m just a long day’s drive away. And I’ve almost shaken the head and chest cold to boot.