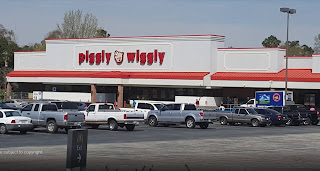 It was a story that could only have happened in the South. Not quite the angst of a Southern Gothic tale by the likes of Flannery O’Connor, but it was nearly peculiar enough.

I had stopped in at the Piggly Wiggly for some groceries. The only reason I was at the Pig and not at Food Lion was that the good people of Brunswick County had lost their collective mind and were lining up at any station that appeared to still have gasoline. Like most Americans, these people were not real smart and prone to jittering panics over things like toilet paper and gasoline. Further, New Hanover and Brunswick, the counties around Wilmington, North Carolina get most of their gasoline from the port. However, when the news broke that the Colonial Pipeline had been hacked, Walmart sold out of gas cans and the people lined up at the station with ten or fifteen jerry cans in the back of their pickup truck. Gas wasn’t going to be that tight around here because of the port supply, but the panicky people made sure it got tight anyway. We had four or five days of dry gas stations until the port could catch back up.  As I navigated my way around all the gaslines to get back to the boatyard, it was easier to get into the Pig than into the Lion.

Well, back at the Piggly Wiggly, it was dusk and I had stopped for some grub. As I got out of The Moose, my campervan, a man began to chat me up about my ride. One part of Southern Charm that I particularly enjoy is getting caught in a random, pleasant, yet surprisingly detailed discussion about things like campervans or gas shortages and such. Luckily, he didn’t want a peek inside. I’m concentrating on boatwork and The Moose is typically disheveled. But he thought it was a fabulous vehicle and got real excited when I told him that I would be looking to sell it in a couple months or so.

He and his wife often travel to West Virginia to see the family. A campervan in which his wife could stretch out occasionally or use the bathroom would be perfect! I took his number and promised to call when I was going to put The Moose on the market. He wished me well and drove off. I went inside for some victuals. 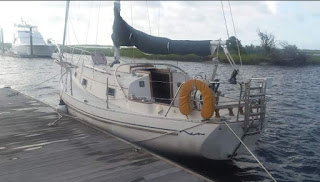 Now, I have a boat to get back in the water. In fact, it’s been fourteen years and four boats, and I’ve never been closer to accomplishing my goal. It won’t be long and I’ll be wandering off on a sailboat. It’s been my plan, nay obsession, for a good part of my life. Ruth Ann, my Bayfield 29, is in a remote boatyard outside Wilmington. Last year, I was here for six months, living next to the boat in The Moose. During the early panic of COVID, I rarely left and got a lot of work done. I took off for the second half of 2020 to drive a truck again; making some money and hiding out from the COVID closures and disruptions. While I was gone some of the rules changed. A couple of the other vagabonds who were living in the yard on their boats had pushed the limits of the owner. Therefore, I can’t live here full time now that I’m back. I’ve been cheating some on the weekends but most evenings I leave to boondock elsewhere. 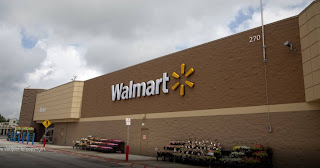 My primary boondock spot is the local Walmart parking lot. I park out in the far corner with the truckers. There are a couple regulars but I’ve been a little on edge about being there consistently Sunday through Thursday. I’m not really sure anyone is paying attention, but I’ve been waiting for someone to say something. I’ve been waiting to get busted.

So, last week I had grabbed some supper and pulled into the Walmart. Over in the corner with the trucks, I climbed inside, put the privacy curtain up in front of the windshield and pulled the curtain on the side door. A friend called and we were talking when someone rapped sharply on the driver's side window.

“Just a minute,” I said slowly, “someone is knocking on my van.”

“Hello!” I shouted to my visitor.

I stood up and peered out the windows up in the Moose’s cap. I shouted again, asking if I could help, suspecting that it might have actually been the truckdriver next door. Did he think I parked too close? I pulled back the corner of the privacy curtain just in time to see someone walk briskly past the driver's side heading toward the back.

The person I saw in that moment appeared to have been wearing a chambray shirt over a t shirt and maybe some jeans. I was no longer concerned that it was someone official. It wasn’t Walmart. It wasn’t the cops.

“Well, I’m back,” I told the friend. She wondered what was going on. Newly confident. Or no longer caring, I told her that I was eating a salad and talking to a friend and if it was important they’d be back.

Still as I lay down to sleep I couldn’t stop wondering what the heck had happened. Why would some random person knock on the van but not answer? The windows were open and I’m sure they could hear me when I called out to them.

In the mornings, I sometimes get a cup of coffee from the nearby Dunkin Donuts. No donuts, but I do occasionally get a bagel (not much better). The morning after the strange knocking incident, I folded my linens, folded up the couch, and opened up the curtains. I walked around and hopped in to drive off. I had driven a hundred yards or so when I noticed the note under my windshield wiper. Well, hell. I stopped to grab the note.

Written on a folded envelope.

It was the guy from Piggly Wiggly; apparently still enthusiastically considering the possibility of buying The Moose. He must have been giddy to have run into me again on the other side of town. I can only imagine that he heard me say “just a minute, someone is knocking” and decided not to bother me any further. It would have helped to know as I tried to sleep afterward.

To make the story one notch better, inside the folded envelope was a shopping list. From the mundane fruits and veggies to mayo and a couple bottles of water, the list also included a bottle of GasX but with the word “price” circled next to it. Apparently, someone is having intestinal discomfort but not enough to splurge on GasX if it’s too expensive. Also listed was the very specific “70% cacao chocolate bar” and a reminder to pay the water bill.

Then I turned the envelope over. The Internal Revenue Service was corresponding with someone else, not Mike. So, did he find an envelope and make a list? Or did he find someone’s discarded list to write me a note. More mysteries, but what the heck? That just keeps life interesting.

I keep remembering to call Mike when it’s a little early or already a little late. I’ll call him this evening. First, I need to check The Moose. I’m not sure, but I think it’s an 8 cylinder engine. I can tell you all kinds of minute details about my boat, but I don’t have the brainspace for the van’s specifications. In the meantime, I’m happy to be downsouth and plenty happy with the progress I’m making on the project list. Ruth Ann will be back in the water this summer!