Back in North Carolina 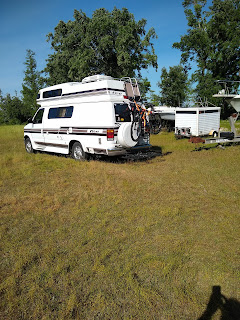 In the last post, I picked up The Moose, my campervan, the last weekend in April. I headed south to get back to a storage unit full of what had been in the van. The weather near the storage unit was turning bad, so I drove the 300 miles from Savannah to Minneola, FL and emptied the storage unit -- all in one day.
The Moose was disorganized and full, so I spent the night in a nearby motel. I was tired and needed a shower anyway. The next day, I only went as far as Orange Park to be near my mail service. First thing Monday morning, I picked up my mail just in case my last paycheck had arrived. It hadn’t. So I kept trudging north.
After a light day the day before, I was going to trek from just south of Jacksonville all the way to the boatyard. I didn't get started very early and spent a good part of the morning getting my mail and giving The Moose a wash. It was going to be dark by the time I got to Navassa, so I picked a spot to stop in South Carolina and booked another cheap motel. 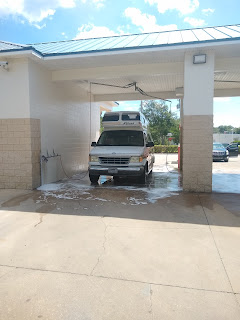 In some little town off I-95, somewhere past Florence, I checked into the motel I had booked. There was a Waffle House across the road, a Huddle House next door, and a sprinkling of the usual fast food joints. One of my goals in this new segment of my life is to eat healthier than I had while truckdriving. Toward that end, I walked past the Huddle House and the Backyard Burgers to get a salad at Wendy’s. The Backyard was closing and I was concerned about Wendy’s, but a car came around their building to the drive thru window. They must still be open.
As I walked around the building, I could see that all the chairs were up on the tables. Pre-COVID this would have been a bad sign, but nowadays it’s often just to regulate social distancing or to indicate no dining in. Three or four employees were sitting around a table in one of the booths. I opened the door and stepped inside to find the booth of employees staring at me blankly.
“Are you open?” I asked slowly.
“Yes, baby, but drive thru only” came the answer.
Even if I hadn’t already parked after a long day, the drive thru wasn’t going to do me any good as the van is too tall.
I walked back into the cool night.
Generally, I prefer a Waffle House to a Huddle House, but the road was pretty busy for a Monday night. Big noisy pickups and thumping cars careened back and forth, pulsing in and out of driveways as the fast food joints began to close.
Hungry, tired, and chagrined, I stumbled back to the Huddle House.
Inside the Huddle, several booths were occupied and a couple employees acted busy behind the counter. It was curious how busy they thought they were, for nearly every other table was covered with dirty dishes, wadded napkins, and scattered flatware. I waited to catch someone’s eye and eventually got the same blank stare.
“Sit anywhere?”I asked. She just nodded.
Two booths looked available. The first was right next to the passage in and out of the grill area, so I kept walking. As I approached the very last booth in the back, I could see that the table was covered with puddles of water. The dishes had been cleared but the table never got wiped down.
I went back to the table by the grill.
There is nothing healthy to eat at a Huddle House, nor a Waffle House for that matter. That’s not the point. I had breakfast after dark and stumbled back to the motel. 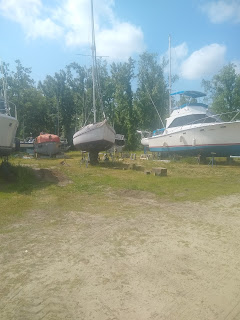 The next morning was an easy jaunt up I-95 and across US74 to the boatyard.
I was back.
Time to finish the work I had started. We are going to be back in the water this summer.
Unbeknown to me, the yard had been very busy while I was gone. Just down the Cape Fear River is Southport, North Carolina. The Southport Marina was devastated by Hurricane Isaiah in 2020. The docks and all the boats had been swept ashore and piled up at the clubhouse porch. Thirty five boats were brought to Cape Fear Boat Works for repairs. They are just now getting back to a normal schedule.
Ruth Ann has spent the last ten months or so out in the yard. Sam and his good people were going to move my boat back near power and water but hadn’t yet by the time I arrived.
I spent a couple days organizing The Moose, cleaning up and preparing. After a couple days, the yard launched another boat and moved Ruth Ann into the vacant spot. I moved my tool trailer over next to her, set up camp, and got to work.
More about that … next time.
at May 17, 2021