The First Month Back

After the trials and tribulations of waiting for The Moose, my campervan, I finally got back to Navassa and back to Ruth Ann the first week of May. It was so good to be back with my boat. As I mentioned last time, the yard had been very busy with hurricane damaged boats and Ruth Ann was still out in the field.

I spent a couple days organizing, but got right into boatwork when the boat was moved into her new spot next to power and water. The first job was cleaning. Ruth Ann was dirty. Besides the usual boatyard detritus, a major construction project had started just down the road after I left last year. Lots of dust and a bit of green where the water drained off the deck and down the topsides.

After making Ruth Ann more presentable, I got back into the wiring. There were about three generations of wire on the boat. Each previous owner seemed to have clipped the ends and ran new wire for new electronics. All that wire was still run throughout the boat. There wasn’t room in the nooks, crannies, and wireways to run any more wire! I spent a lot of time last year unwiring to make room.

Last month I finally got down to my own wiring. I wired in the AC charger, set up the lithium batteries, wired a battery switch for the system, placed big fuses for the batteries, blew those fuses while wiring the inverter, replaced the fuses, and finished all the basic wiring that could be done. The wiring is fairly organized if I say so myself. Because of space constraints, I have two small DC panels; one for all the lights, accessories, and instruments, and the other for navigation lights. I had cabin lights and fans wired in last year, but had to trace a short on the port side. Everything works well now and I have been using the fans a lot. 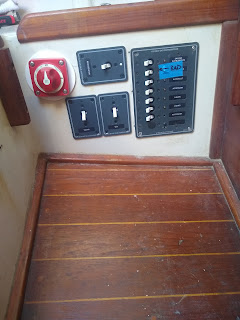 There are some electrical projects that will wait until later; like a Raspberry Pi for navigation and another Pi as a media center for my music and a few movies. Also, after the mast is down and the bowsprit re-installed, I have a couple more navigation lights to wire.

Speaking of the bowsprit, I disassembled, stripped varnish, oiled, painted, reassembled, and strengthened the bowsprit. I like teak oil more than varnish, especially for a liveaboard. Every couple months I can daub some more oil and my teak looks nice. Varnish looks spectacular for a few months but the care and maintenance is more work than oil, in my opinion.

There were, of course, some blisters in the unpainted patches where the jack stand pads had been. A couple days in May were dedicated to grinding those blisters out. I am letting them dry a little, but will soon fill and fair them. Also, I am fiberglassing shut a hole where there used to be a throughull. I scarfed that out for lamination while I had my grinder out.

I was dreading getting to my engine. I am not yet a diesel mechanic of any value. For many months, I’ve been stewing about the engine and it’s condition. It got fairly cold last winter in the Carolinas and I hadn’t prepared the engine for freezing. Luckily, it appears I got away with it. I don’t think the chilly temperatures sustained long enough for any freezing to have happened. 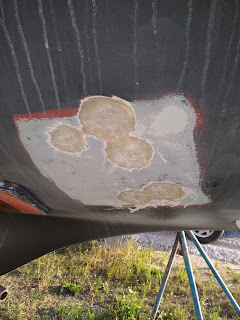 As I dug in, the engine was in much better shape than I had imagined. I cleaned up, scraped, and sanded. After a few splashes of OSPHO on the more rusty bits, I painted where it was needed. The engine looks great and I hope it is happy. On my list is to set up a water supply and run the engine to check it.

When I moved the boat in June 2019 after buying her, I felt too much heat in the engine compartment. When I discovered an exhaust leak and diesel soot blown all over, I thought that a hose clamp had gone missing near the mixing elbow. Lo and behold, the riser that attaches the mixing elbow to the engine manifold was completely rusted and no longer even connected. The riser probably should have been replaced 15 years ago. Instead, someone had hid the problem by wrapping it up nicely with pipe insulation. Or maybe they thought they had fixed it. Further, the mixing elbow itself was cracked. 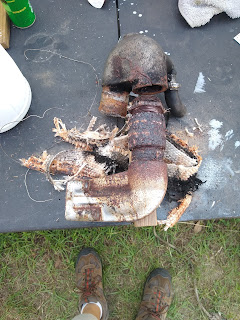 It is actually possible that the cracked mixing elbow resulted from my failure to winterize the engine. However, the crack did not appear fresh. There was significant corrosion down into the crack itself. The condition of the riser certainly shows that this corner of the engine hasn’t gotten much attention over the years.

That was a full month of boatwork. I have been treating this project like a job and showed up for work, seven days a week. I am proud of my progress. Alas, there have been a couple expensive surprises. The mixing elbow and riser were not cheap and before I even got here, I spent too much money sitting in Savannah waiting for my van to get fixed. I may do some temp work in the coming weeks. Nevertheless, I am committed to getting Ruth Ann back in the water this summer. It may be deep into September before I’m done, but summer lasts until the 22nd! 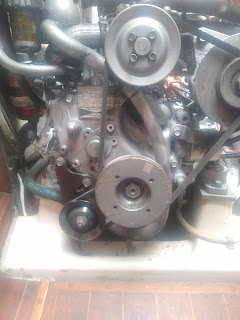