This is Part Two of a Three Part Series, start with Part One here.

This is where the wheels start to come off of the story, but it’s only the beginning of the gonzo weirdness to come. John, the owner and chief mechanic of the transmission shop suffered a serious back injury. Nevertheless, he was still trying to keep up with his regular business and take care of a warranty issue for some weirdo vagabond and his camper van. He thought the van would be done the following week. I was chomping at the bit to get back to my boat, so I submitted my two week notice at work. Cheerfully assuming that I would have the van back by the end of the next week.

I finally talked to John at the shop the day before Nancy and I were going to head back up to Savannah. He explained his injury had kept him from the shop for a few days but he thought the van was done. “Let me take it for a test drive and call me back in the morning,” he said. Well, ‘in the morning’ was going to be into my ‘weekend’ and I had already arranged a ride. I called Nancy to explain that I thought the van was going to be done by the time we got there, but I couldn’t be certain. We decided the worst thing that could happen was a nice day in Savannah and no van. So we hit the road; took the chance.

Same deal, as usual, I ended my week early in the morning. The company I drove for was good to us drivers. If you drove that day, that day was a workday; your weekend would be the next two whole days. Many trucking companies think a ‘weekend’ is the 48 hours after you turn your truck off and expect you right back. We hit the road on my ‘Friday’ and made Savannah by evening. I tried to get us into the wonderfully quaint and cool Thunderbird Inn, but they were full; something about the azaleas being in bloom. We had a nice dinner on the sidewalk downtown and headed back out toward the highway.

The next morning, however, I learned the van wasn’t ready. The same trouble with stalling in reverse had snuck back into the picture. “Call me back this afternoon,” he said. So, Nancy and I hit the Ships of the Sea Museum, enjoyed the museum’s garden, drove through the Savannah National Wildlife Refuge, and wandered out to Tybee Island Beach and the Atlantic. Man, it was good to dip my toes into Mother Ocean. The beach, however, just wasn’t as nice as some of the sugar sand beaches I’m used to in Florida and Michigan. 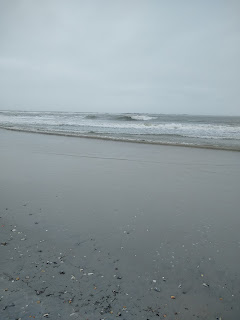 I talked to John near the end of the day and I could hear the frustration and exhaustion in his voice. Half crippled by the back injury, he was still working desperately to fix my van. He had begun to suspect it was the computer rather than the transmission that was stalling the engine. He had a similar computer in the shop and had hot-wired it into the van. It then drove fine. So he had ordered an appropriate computer online and the van should be ready the next week.

Nancy and I had had a nice day in Savannah, but I needed to get back to work; with or without my van. So, we headed back south. I had a week left at work and no wheels.