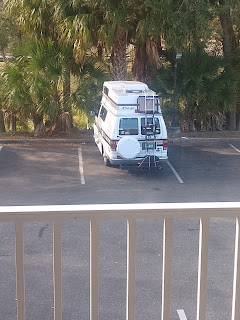 It was a pretty simple plan when it started. Nothing complicated. I needed to get my half crippled camper van, The Moose, back to a shop in South Carolina for warranty work. The shop is just across the river from Savannah. Then I’d need to go back and get it in a week or so.
Simple.
I have a terrific friend, Nancy, who just happened to be nearby. We’ve known each other since we were nine years old and have been through all kinds of adventures; with our families when we were young as well as later in life. She was going to follow me up as I tried to get the van back to the transmission shop. I was still working in Florida about five hours away. A week or so later, if all went according to plan, I would have my van back just in time to quit my job and head back to my boat, sv Ruth Ann, in North Carolina.
In fact, Nancy knows me so well, the ‘Deja Moose’ part of the title of this blog was her idea; it fits perfectly with the story and even with my style.
The transmission shop had installed a rebuilt transmission last fall but it had started acting up. Being so far away, I first took it to a local shop hoping that a tune up or a simple fix external to the transmission would do the trick.
No such luck.
The local shop confirmed my fear that there was indeed a problem with the transmission. It seemed to affect only the reverse gear but they couldn’t be sure it was only reverse or how and when it might get worse. Since it was under warranty, they recommended I take it back to the original shop.
They also only gave me a 50/50 chance of making it back to Savannah if I tried to drive there.
I considered all kinds of options to get the van to the shop without driving it but all were several hundred dollars. I just couldn’t bring myself to spend a bunch of boat money on the van. I’d already taken two hits last fall; buying the rebuilt transmission and I had lost almost three weeks to COVID.
I’ve been driving a truck based in Florida on a seven days out, two days off schedule, but I arranged to have an extra day off. I might need that extra time if there were any problems with the van on the way. I had decided to chance it and drive up, but I was being as practical as possible.
I’ve been living in The Moose since November 2019. Full time until June and then just on weekends after I started truckdriving again. Before that, when I was working nights in Michigan while helping Mom and Dad, I actually slept in the van in the driveway where it was quieter during the day. So the van and I go way back. Further, I had lots of stuff in the van: clothes, food, boat stuff, and books. If the van broke down on the way to Savannah, I’d be stuck with all my stuff somewhere along the road. So I rented a storage unit in Florida and packed up my stuff in boxes the previous week.
It was auspicious that Nancy happened to be nearby. She arranged to borrow her Mom’s car to follow me up (thanks, Elna). My week ended fairly early in the morning on what was, in effect, my Friday. So I nearly had an extra day -- almost a four day, three day weekend. When Nancy came by to join the northbound caravan, the first thing we did was empty the van into the storage unit. I just had to park it where I didn’t have to back out. I had already worked that day, then schlepped all my stuff into storage, and hit the road. We made it as far as Brunswick before I ran out of steam.
The next morning, it was only an hour and a half to the transmission shop. We had a big breakfast at the Sunrise Diner and hit the road. The van made it all the way without a hiccup. It was a quiet Sunday morning when I stashed the key in the van’s grill and left a voicemail for the shop. Just then, we realized that I still had two more days off and we were halfway to my boat. I hadn’t seen her since the previous October and Nancy was keen to see her in person.
So … why not?
We took a leisurely ride through the low country, grabbed a Holy Shiitake pizza at the Mellow Mushroom in Mt. Pleasant, South Carolina, and got to the boatyard in North Carolina by supper time. [Editor's Note: Holy Shiitake pizza: 3 kinds of mushrooms, carmelized onions, mozz, and a garlic aioli swirl all on an olive oil and garlic base. YUM!]
When I was living at the boatyard last year, Sam, the owner, would often come out on Sunday afternoons with his family. He occasionally mowed the lawn, though he had a guy who did that. Also, his grandkids would sometimes ram around the outer edges of the boatyard on their fourwheelers. Sam was just leaving that evening when we arrived. He waved and smiled.
The first problem I had was that in all the keys I had on three carefully curated keychains, not one of them was for the lock on my tool trailer, the lock on my ladder, or the one on the companionway to the boat. I could picture a lone key that I had found while packing the van. I had looked at it the week before and decided I didn’t know what it unlocked, so I packed it. Now, I think I know exactly what it was for. 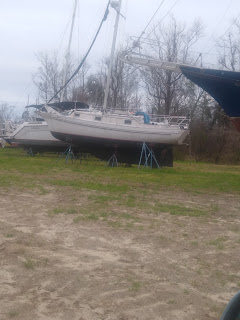 Ruth Ann has been out in a field since I left and was pretty dirty, but she was fine. I had some errands the next morning, so we headed into town. I bought a hacksaw and a pair of padlocks, then we grabbed some takeout from my favorite little family-run sushi shop.
The next morning, in Wilmington, we grabbed bagels and Dunkin coffee. Back at the boatyard, I broke into my tool trailer. The tools looked fine; none missing and not much rust. I’ll be curious if my Milwaukee rechargeable batteries survived the idle time. But that will come later. With the trailer now open, I had access to my angle grinder. I lamented that there wasn’t any power way out here and Nancy reminded me that my generator was in the trunk of her car.
Superb!
I fired up the generator and was through the lock on the ladder in no time. Next stop, ladder in hand, was the boat.
I set up the generator and threw an extension chord up into the cockpit. We climbed aboard Ruth Ann and I buzzed my way through the lock with a random piece of boatyard 2X4 behind it to protect Ruth Ann’s woodwork. We went down inside to take a look. I gave Nancy the nickel tour. All the boat parts I had bought were still there; solar panels, windvane, and electrical stuff. There were no bugs, no critters, and only about a half a cup of water in the bilge. That was a wonderful relief.  Life is good. I’ll be back here in a couple weeks, I thought. So we locked everything back up and headed south.
Nancy had followed me to Savannah, we had road-tripped on to Ruth Ann, and then ran all the way back down to Florida so I could go back to work. It was a huge help and some good fun. And(!) she took my SPOT satellite messenger with her to update the firmware. I don’t have either the required Windows or Apple machine. It wasn’t very complicated but she was a computer savvy person I could trust.
It was an awesome roadtrip and Nancy thought she could help get me back to The Moose when it was ready. Little did she know how complicated that might become; never boring, and more than occasionally fun.
at April 23, 2021