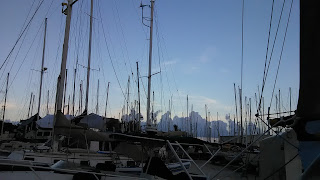 Riverside Marina is really a boatyard. That sentence could have ended -- ‘really just a boatyard,’ but boatyards are important to sailors. For a vagabond like me, Riverside is an inexpensive place where I can do my own work. Often at a capital-M marina, there is only a small category of work that a skipper can do on his own. Most boatwork must be done by hiring marina staff or approved contractors.

There are a couple hundred boats here. Many are here for major refits like my Emma. Some, on a schedule, are here for a few short weeks of intense work and then go right back in the water. Many Canadians spend winters in the Bahamas and store their boats here each year for the summer hurricane season. The property used to be a cement plant and boats languish in the back of the lot, in the gravel, with fading For Sale signs swinging hopelessly from the lifelines. Many more poor, neglected boats here will never get back into the water. Some are literally rotting into the ground.

The “marina” part of Riverside is a man-made cut into the mainland north of Fort Pierce. This cut is lined with docks and, before hurricanes Irma and Maria, docks extended out into the water on each side
of the privately maintained channel. The remaining docks are occupied by a hodge-podge of boats, power and sail, in varying degrees of seaworthiness. Deep in the marina are a couple rough boats tied to the wall. Each day I walk by and marvel that they are still afloat.

Both boats are occupied by gentleman who would probably otherwise be homeless. Apparently, however, they are paying the slip fees and have enough to eat (and drink). One boat appears to be a Dreadnaught, a first cousin of the Westsail 32 like Emma. I actually haven’t seen that guy in some time. The other boat is a 1970s production boat with some curious modifications and no mast. I’ll call the guy that lives on the second boat Dan. I used to park just above Dan’s boat in the lot. At the time, I was coming and going at all hours of the night. I’m not sure he always appreciated that, but whenever I saw him during the day we would wave. I’d say “Good Morning” and he’d answer “It’s a beautiful morning” with special emphasis on the ‘bee’ of beautiful. I never heard many other words from Dan.

A couple days ago, I was just starting a boatwork day, when I realized that I needed more gloves. There is a fiberglass supply shop very nearby. I grabbed my trash (always multitasking) and hiked out of the boatyard toward the dumpster and then my car; perhaps a hundred yard circuit. The last leg took me along the main driveway and past the two sad derelicts. Dan was sitting in his cockipit in the morning sun. He was the vision of a certain archetype Floridian: boonie hat, nicotine-stained mustache, old t shirt, ragged shorts and flip flops.

“It’s a bee-utiful morning.”  And then unexpectedly, “Are you going by AJ’s?”

I’m not sure I had ever heard two sentences right in a row from him. After the jolt of it, I presumed that he meant the little gas station up the road.

Just then I stubbed my toe on an uneven board in the dock. With a two-step and a twist, I managed to remain standing. Dan was struggling to stand up and step out of his boat on the same dock.

“I’ve been looking for that nail sticking up.” Dan said.  As he slowly joined me on the dock, I got the
idea that he was already half in the bag that morning. There was an empty case of Bud Light on the floor of his cockpit, but he was walking, so I assumed that couldn’t have all been from this morning.

At my car, I moved the sunshade to the backseat and grabbed a couple loose bottles off the floor to make room. Dan folded his lanky frame and joined me in the car with an awkward, hesitating motion. As the wind blew through our open doors, I got a pretty strong shot of dry sweat, stale urine and maybe that last beer or two. I had assumed he was living on the edge, but poor Dan was living more roughly than I thought.

On the way toward the store, Dan asked how my boat was coming along. He asked if I was getting gloves for fiberglassing and chuckled when I said I was stripping paint. He knew what that was like from helping friends with their boats.

I took the back way on Old Dixie Highway and drove up the hill toward U.S. 1. Dan corrected my navigation as I wasn’t quite right about where AJ’s was. I use the little gas station across the highway coming home from work, but AJ’s is the party store on the other side; nearer to the boatyard.

Dan climbed out of my car and stood on unsteady legs. “Well, I would wish you a wonderful day,” he said with a smirk, “but with all that paint stripping, I know you’re not going to."

He marched toward the store with a carefully clumsy, day-drinking stumble that kept perfect time with his uneven coughing laughter.

I couldn’t help but smile myself that a guy like Dan, just barely better than homeless, was enjoying a laugh thinking that he was going to have a better day than I.