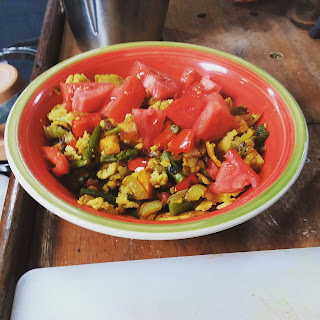 One day last week, I had gotten up early enough to make a big breakfast. Dispatch had flipped (flopped?) my schedule to afternoon. My start time was 11:45 AM, eight or ten hours later than usual. Breakfast was going to be one of my favorites; a chickpea scramble with a skillet full of veggies.

Every good day starts with coffee, but especially a big breakfast day. I poured four cups of water into the pot and lit the burner. Next I turned on the inverter and set up to grind my beans. After a couple of buzzing pulses in the coffee grinder (one that I had found on the boat when I bought her), I sloshed some water in the french press and dumped yesterday’s spent grounds into the chopped-open milk jug that serves as my sink -- sink drain actually. Finally the fresh ground beans went into the press to wait on hot water.

I got my veggies organized; onion, mushrooms, zucchini, poblano pepper. For some reason, the sight of a half zucchini on my cutting board prompted me to immediately chop it up -- way out of sequence. Getting back to my routine, I started measuring the chickpea flour for the scramble. I’m really hooked on this simple recipe. It is what I think is proper vegan cooking. The scramble becomes a familiar context but avoids the contradiction of plant-based foods trying to replicate the texture and flavor of an animal-based food. If you’re going to avoid animal products but cling to the forms like scramble eggs or hot dogs or hamburgers -- have you really accomplished the switch?

As I was measuring a quarter cup of chickpea flour, the reverie of my slow-paced, peaceful morning was interrupted by a familiar sound.  The tone of the flame under the coffee water shifted. The slightly more airy, less roaring sound meant that I was running out of propane. There are several boat projects ahead of the galley on my list, so I am still cooking on a two-burner campstove fueled by those little green propane canisters. I can get 8 or 10 days out of each container, depending on how and how often I cook. But when I hear that particular sound, I know I have about three minutes of reduced heat before the flame goes all the way out.

Standing in the galley, in pre-coffee stupor, I remembered that the two gas canisters I had just bought were still in my car. It was late morning but on a morning after a cold snap. Not only was more gas about 100 yards away, I wasn’t dressed yet and it was in the low 50s outside my cozy cabin. The breakfast plan had to change.

I gathered the chunks of zucchini into a container and tossed it in my cooler. It was time for “boatmeal.”
In about five minutes my bowl was layered with old-fashioned oats, banana slices, cinnamon, flax meal, raisins, apple slices, pepitas and a few dried blueberries. I had just enough coconut milk in the cooler to pour over the bowl and let the oats soak. With some coffee and the soaking oats, I sat down to breakfast.

There is nothing new about boats and interrupted meal plans for me. Twenty-five years ago, I had decided to celebrate a good week while I had been scrimping and scraping starting a business. On the way home from work I picked up a couple cans of beer, some pasta, a jar of sauce, a nice little loaf of bread and even some parmesiano-reggiano and a little grater. I drooled in anticipation as I rowed out to my home, the boat I was living on in the anchorage off downtown Sarasota. It was when I climbed aboard with my provisions and settled in for the evening, that I realized that I didn’t have any water on the boat. My two empty jugs still sat on the floor next to the companionway steps so I would remember to take them to shore with me that morning. I wasn’t going to be making any pasta that night.

Rowing back to shore for water at the end of a long, hard week was just not in the cards for me. I drank my beer, tore chunks off the loaf and dipped them into the sauce in the jar. All the while the sun had been going down over Lido Pass. Before my improvised supper was done, the stars began to twinkle over the lights of downtown as the dusking of the day faded into black. The worst part of the evening was that I could have used one more beer to go with all those stars.