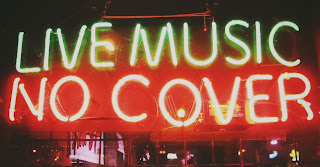 My former self would just not understand. I used to be a Live Music Addict. My life was coordinated for maximum enjoyment of watching good people play good music. Many times, my pursuit of that rush of watching music made came at the expense of most everything else in my life -- budget, health, etc. I don’t regret any of it; it was almost always fantastic.

I had a ticket to see Donna the Buffalo last Friday night but decided not to go. DtB is on my see-before-you-die list, but I chose to go to bed early in order to get up Saturday morning and get back to my boatwork. My former self would be pissed.

The money I spent on the ticket was long gone; didn’t matter. I actually bought it months ago when the show was first announced (It was a band on my list playing just 45 minutes away). Yet, I had work to do and decided to keep at it. Surely, I didn’t need to spend more money on drinks and food at the venue.

Boatwork on Saturday was a little frustrating as I knew it would be. Part of my motivation to stay in and get to work was to finish investigating the strange patches I had started to uncover the weekend before. As I was sanding on Emma’s starboard side before, I had run in to a couple spots that appeared to be some kind of repair using expanding spray foam.

This weekend, I sanded the stretch of topsides that included those two patches. They must be some old storm damage -- poorly repaired. In fact, what looked like foam was a layer of some kind of caulk that had reacted strangely with the paint over it. This layer was a couple millimeters thick and peeled right off as it had not bonded to the layer below it. The lower layer is more solid but had not been sanded before the mystery layer was applied over it. I believe neither repair is structural, just really bad cosmetic repairs hidden, probably purposefully, under the thick, cheap ass paint I’ve been sanding off for two weeks.

I bought the boat from a Miami lawyer. I bought her sight unseen, as is, where is. Even if I had an issue with this latest find -- and I don’t -- I’m sure the lawyer covered his bases well. It's even possible that he was not aware. I've come to disbelieve two-thirds of the legend he told about the boat. I bought Emma for $6000 and expected some surprises; even a heartache or two. Nevertheless, these two spots are really the first ugly surprise. Indeed, there have even been several very pleasant surprises. I got a hard dinghy in the deal and many sails in decent condition. Further, I knew she had no engine, but I didn’t know what was done where the driveshaft exits the boat. Whoever took care of this did a wonderful job, saving me a lot of frustration and even more money.

Emma is my girl. We’ve already been through a lot together. I’m still working on keeping all the promises I've made her. No one should expect that a relatively minor setback would change my mind or give me second thoughts. Emma is a Westsail 32, exactly the boat I wanted. For whatever reason, I found this W32, she found me, and I’m committed to her. She’ll soon be a lovely girl again, all by my own hand.

Now for the cynics out there who read that last paragraph and chuckled, this is not bluster, not some overly romanticized prattle just to cover my ass for regretting my purchase. For those cynics, here are some practical facts: I found a strong, ocean-capable vessel that needed some love -- and an engine. I have already done a lot of the work needed and I have an engine. In fact, the marina engine guru is working right now to adapt Emma’s engine bed to my engine and begin the installation. I have only some body-work type repairs to do, some painting, the inspection and replacement of rigging components and a few minor projects before Emma can splash back in the water. Emma and I will be sailing sooner than I could start over with another boat.

I could sell the running engine, put Emma on the market as a half done project and go back to work. “Back to work,” however, means slipping back into the matrix; modern wage slavery. The more time you spend in the system, the harder it is to see how stuck you really are. I am not yet totally free, but I’ve spent the last eleven years taking the red pills. I see the system for what it is and want no part of it. Emma is my third “escape” boat. I know that starting over would mean a minimum of two more years. Even with this minor setback of a couple new spots to repair, I will have Emma back in the water and sailing in less than a year. I'm not saying that she will be perfect and pretty by then, but she will be safe and seaworthy and we will be off.

Life is good; as good as before.

===
Epilogue: For those of you keeping track, “in less than a year” is way past the May 1, 2018 that I had ‘committed’ to last year. For some time now, I have not been using that date in my own plans. The lucrative, so-called part-time job that I’ve had since October was no where near part-time. This has cost me a couple months, at least, which means I can't get out of Florida before hurricane season; too much yet to be done. To fix that problem, I am switching to a 7 days on, 7 off trucking gig this month.

The good is that rather than rushing toward a goal that I naively foisted upon myself, I have downshifted and will have time to do what I'm doing well and complete a few additional projects between now and sometime after hurricane season. Emma and I will both be in better shape for it. I no longer speak in terms of dates on the calendar. Emma will let me know when she’s ready. She’s as impatient to get back to sea as I am.

===
In the meantime, enjoy 'Positive Friction' by Donna the Buffalo: