This is the first of three posts, find the second and the third.

When we last left our hero, he was trapped by fickle winds and roiling weather in a Milwaukee marina just wishing he could give a friend a daysail.

I was stuck at the marina because the starter on s/v Bella would not turn the engine over. Given my time constraints,  I decided to cross the lake without an engine. The one good thing about sitting on a boat with no engine wishing for better wind was that in just watching the weather, I had rehearsed in my head several ways of sailing off the dock, out the pass, and into the lake.

Dave, my crew for the lake crossing, was as excited as I was to do some serious sailing. When I called to explain my decision to sail without an engine, Dave was still gung-ho. If I had broken the mast off and proposed sailing across the lake with a jib strung sideways on the jagged stump, I'm not so sure that Dave wouldn't have been up for even that too.

I had been tempted to try and beat Sunday's weather and cross the lake on Saturday, the day after the launch and tow. The weather window, however, was very small. As this crossing was to be my first actual sail on Bella, prudence was the better part of valor. Dave came over on the Lake Express ferry on Monday. The plan was for a Tuesday departure with Wednesday held as an option.

As mentioned in the last post McKinley Marina is close to shopping, dining and museums. While we didn't take time for museums, Dave, Nancy and I walked all over, did some provisioning and found a fantastic little Thai Restaurant. Tuesday morning we wandered across the street to Collectivo Coffee for a crew breakfast. After some coffee, essential sailor fuel, Dave and I began our preparations. Nancy wasn't making the trip across as she was driving home, but she stuck around to take pictures and some video. She had also made some guacamole and veggie soup for the crew.

Its counter intuitive to land lubber logic but we were leaving in the afternoon in order to sail all night and arrive at the unfamiliar harbor during daylight. The trip was to be around 20 hours, so making the trip in one day's light was just not possible. I had wanted to push off before 4:00p, but rain late in the Muskegon forecast had me move that up to 1:00p. The wind was forecast for northwest backing to northeast on the Wisconsin side with east wind at Muskegon for most of the next day, Wednesday. My float plan was to head northeast until the wind shifted and then southeast into Muskegon. A dog leg for you landlubbing golfers.

As we prepared to leave, the wind was 5 to 10 knots slightly north of west. I was glad it was a bit mild for the my first ever sail with Bella. The 100% jib was a little small given the wind speed perhaps but we were being prudent. With a backed jib, we eased off the dock using the spring line to control Bella's first steps before the wind. When the jib came across, we released the spring and were sailing! I cut the corner of the mooring field, passing one boat and several buoys to port with the rest of the basin to starboard. I laid her over into a broad reach and we sheeted the jib to run the channel. It all went like we were a seasoned crew and I loved it. 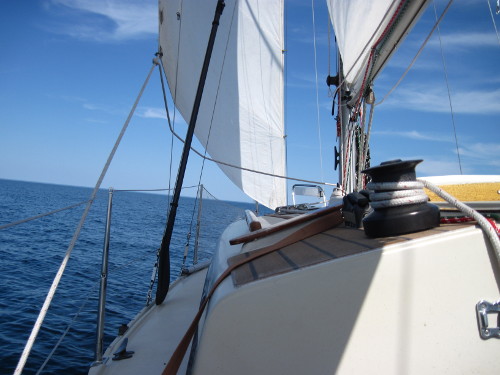 Bella trembled with anticipation and hitched up her skirt to jog a little – even under the jib alone. Dave stowed the dock lines and fenders as I sailed her into the area behind the breakwater. We headed straight south across the wind, tacked back along our track and then entered Lake Michigan through the northern entrance with the wind behind us. Dave, Bella and I fell into a groove and got familiar with each other. We raised the main and she pushed a little harder eastward toward Michigan, her new home. 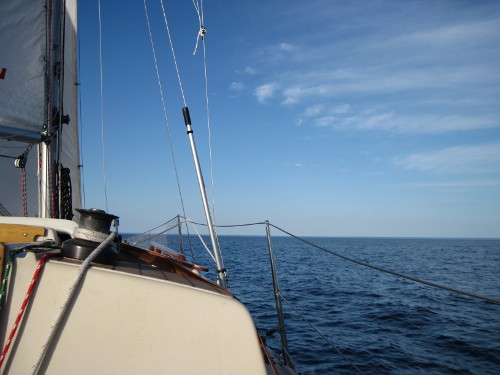 Wind in my hair, my hand on the tiller of a boat shouldered into the waves can only be described as spiritual exaltation. Even without much chop on the lake, Bella galloped to a rhythm as even and natural as breathing. Sailing is just so natural and positively alluring to me – it is where I belong. Whenever I return to sailing, I am amazed that I had survived however long as I have without it. I know its the same feeling a parched, wilted flower feels the morning after a rain, when she straightens and opens up again, rejoicing with a beaming smile to the sun; for the sun stands in as the whole beloved universe.

And then the wind stopped.

We were a mile or so off Milwaukee and becalmed. Becalmed is a part of sailing, its OK. Without an engine, however, becalmed is more disconcerting. We were so close, the Milwaukee skyline still loomed above us. Worse yet, but for the lake, we still could have easily walked back from there. I maniacally twiddled with jib sheets and the main. I tacked the boom by hand over my head. With the lopsided, dilated eyes of a twitching lifeboat survivor, I searched frantically for the slightest puff of wind.

Exuding a wisdom beyond his years, Dave calmly said, “Dude, there's no wind. You're not going to accomplish anything but wearing yourself out.” I managed to settle down, anesthetized by the gentle rock of the waves. We munched on guacamole and jicama ... and waited.

Eventually, without making us suffer too long, the wind returned. It came back a little south of west, then later backed to the northwest and we went from running to reaching again. I had been very happy with the deal I had got on Bella just as raw equipment. Now I know first hand that she sails like a dream. The sailing was glorious and I am thrilled with my new boat. She has no idea what I have in store for us.
at July 03, 2014