This is the second of three posts. Find the first and the third.

West Michigan is blessed with sunsets at the lakeshore. The population here is thick with sunset addicts. Actually, people come from all over to savor those moments when the sun sizzles into the western horizon and splashes its colors across the clouds and sky. These sunset fans will all know the icy blue color the lake often gets in the fading light of the day. On our trip across the lake, as the sun flared orange and red over Lake Michigan, I was surrounded as far as I could see in every direction by that same shimmering, living topaz blue. 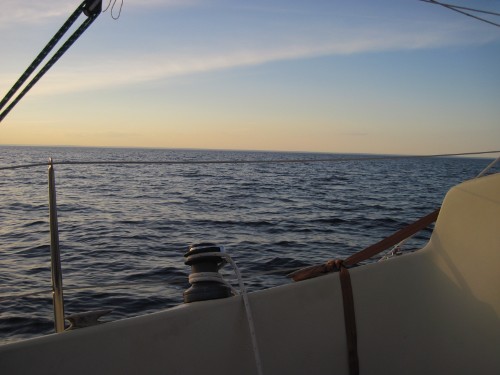 I really should have woke my crew, Dave, to see the sunset. We had done the first six hours together and were going to split the rest of the night in three hour watches. I had let Dave take the first break. As the sun slid toward the horizon and a premature moon appeared, I reveled in the fact that I was sailing my own boat across Lake Michigan. It was glorious. In all my days and daydreams of sailing, I had longed for sailing beyond the horizon. I wanted to get to where I could not see land – anywhere. Like the sweaty junior high anticipation of actually dancing with a girl, I had no idea what I was doing or if I could pull it off, I just knew that I wanted to more than anything else. The night was a little overcast without many stars and it was getting cold. Dave wasn't due into the cockpit until 10:00p.

The lapping waves and gurgle of the boat moving through the water was as relaxing as you might imagine – in the cockpit. When Dave relieved me and I went below to catch a little sleep, I couldn't believe the racket! The water rushing past the hull was deafening. Imagine shrinking yourself to lay inside the drain of your bathtub as it empties. I wasn't sure I could sleep as excited as I was; let alone with all that racket. It hadn't occurred to me that in all my sailing, having never really sailed offshore, I had never been down below underway. But soon I had managed to slip off to sleep anyway. 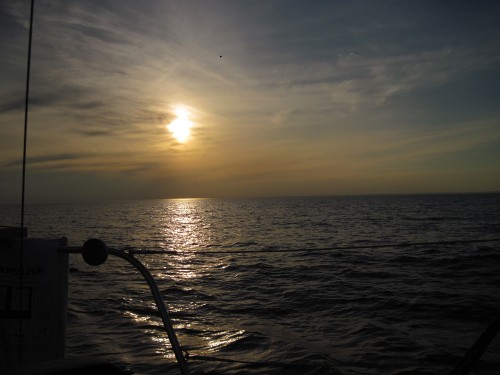 And then the proximity alarm went off.

“What is that?!” Dave called from the tiller.

One of the reasons I'd been so happy about getting Bella is how well equipped she was. The VHF radio, normally used for talking to other boats, bridge tenders, and marinas, is also equipped with GPS and AIS. The GPS is just like in your car without the streets. It tells me my latitude and longitude, plus which way and how far it is to a waypoint; a destination.

The radio also receives AIS signals. Cargo ships, ferries and other commercial vessels are equipped with transponders that broadcast their name, call sign and heading. I had set up the radio to warn us when a big ship was seven minutes away. I just hadn't told my crew.

“He's lighting up our sails with a spotlight” Dave said. 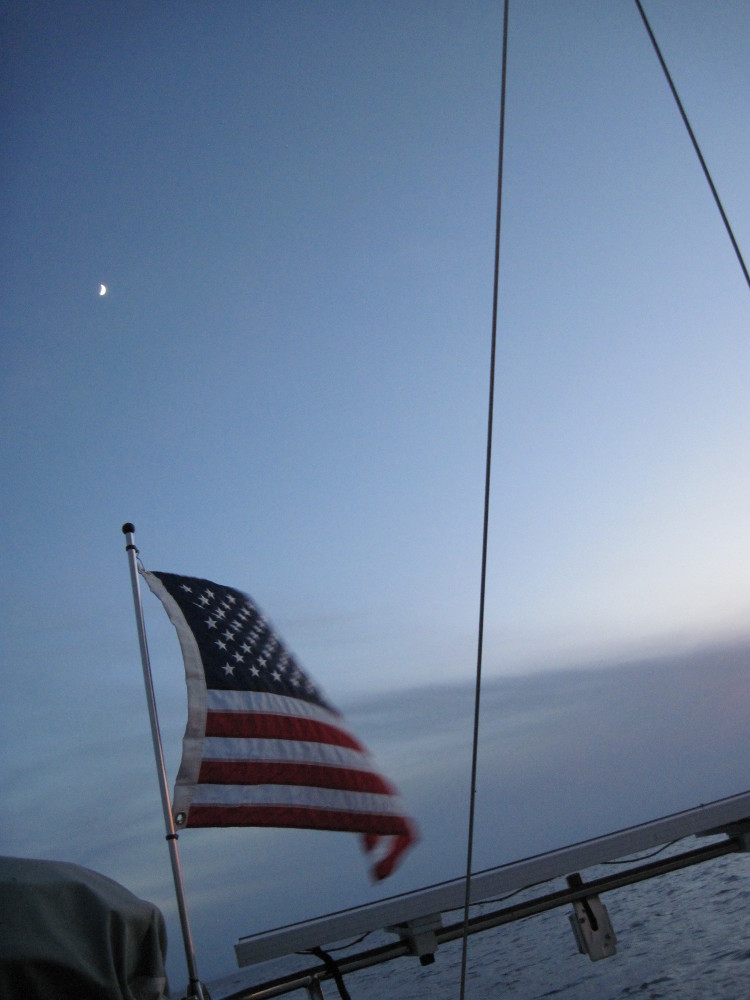 I poked my head out the companionway and could see running lights of something big behind us. By his green and white lights, I knew he was headed north well behind us to the west. Their amazingly powerful spotlight was just a pinpoint out there, but a big splash of light against Bella's white sails. There were a couple other boats north and east of us, but their lights were far enough away I couldn't make out which way they were headed. The AIS screen wasn't showing anyone on a convergent course. The couple of blips that were there were just skirting the circle, off in other directions. I laid down again but didn't sleep any more. As jazzed as I was just to be sailing that would be enough.

About 1:00a, on Wednesday now, we traded spots again and I was back on the tiller where I wanted to be anyway. It had gotten even colder! I had five layers on and draped the wool blanket across my lap when I settled in and got Bella in her groove. The joy soaked back into me and kept me plenty warm. We were slightly north of Muskegon already. Later when the wind shifted, once again in our favor, I slid Bella's bow more toward Muskegon. We hadn't even tacked yet. We ran before the wind from Milwaukee, then leaned into a broad reach to the northeast and had just leaned into a reach toward Michigan. The boom hadn't crossed the boat since we were becalmed a mile from Milwaukee. The wind gods were taking good care of us. 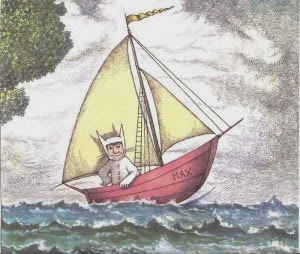 Its funny how being skipper can change your attitude. The feeling of responsibility weighed on me. I couldn't have made the trip without Dave being along. He was a great help. Though I had considered making the trip alone, I couldn't have pulled it off. But with crew I was also responsible for more than just myself. It was more comforting than worrying, but it was at the forefront of my thoughts.

At 4:00a Dave was to come back on watch. He woke up freezing cold and couldn't stop shivering. I was worried he was getting hypothermic. It was cold and damp now, but we hadn't ever closed up the companionway in the fair weather we'd had. As it got colder overnight, the cabin had gotten just as cold as the cockpit.  I had him heat up some water on the stove to warm the cabin and told him to stay down there. He bundled up and eventually fell back to sleep with a couple drop boards in the companionway and the stove on. Without an engine, any medical issue could have spelled the end of our trip and quite possibly the end of s/v Bella.

I was doing fine, until I saw snowflakes.