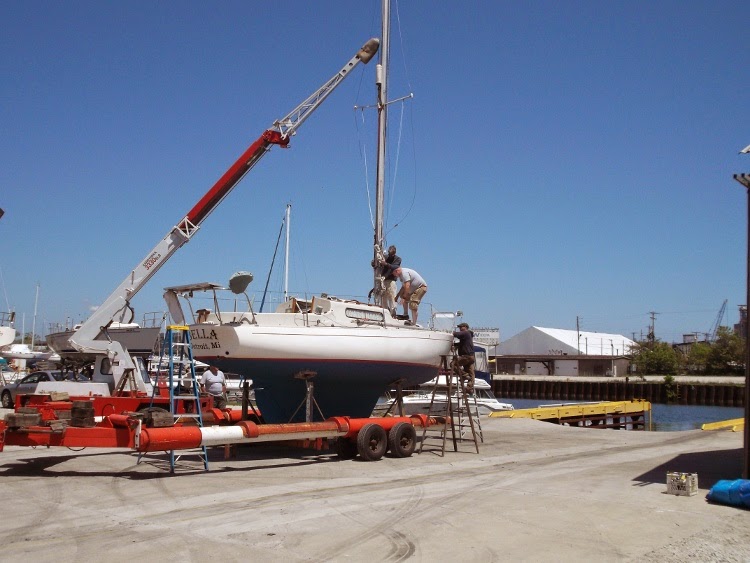 Once I had decided to leave the starter issue for later, I went to work on my other priorities. The mast went up, the rigging went up and the boat was launched by the guys at Pier Milwaukee; a great boatyard. I had been calling around about getting a tow down to the McKinley Municipal Marina where I had reserved a slip. There is a dearth of tow boats in Milwaukee. I have tow insurance through Boat/US but their nearest franchise was in Kenosha, a good distance away. As a non-emergency tow I would responsible for half of the charges from Kenosha to me, the tow to the marina, and their trip back to Kenosha. Chris, the owner at Pier Milwaukee, suggested I talk to the boat next door. He had heard that they were going downriver to McKinley that evening. 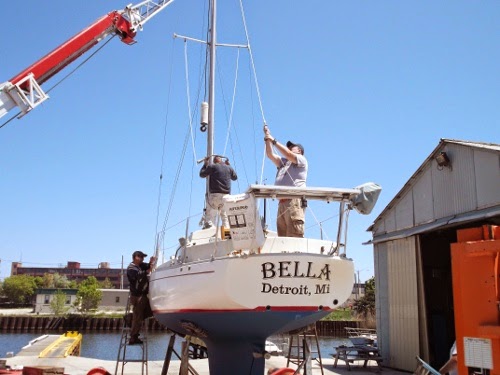 When Bruce showed back up with his wife, son and dog along, it turned out that he was planning to piggyback on my appointment to get under the railroad bridge. Instead of following me through, I followed him because he agreed to tow me down to the marina. We were on! 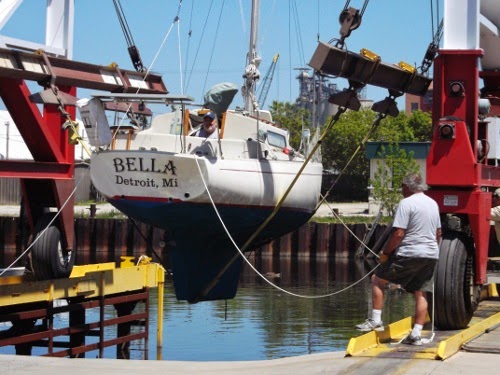 Bruce had never towed another boat with a sailboat, but we shoved off, he swung around to grab Bella, and I tossed him a line. We puttered around the first bend of the Kinnickinnick River and lolled our way past the Horny Goat Hideaway and under the 1st St. drawbridge. Bruce was in charge and was contacting the bridge operators as we went. The tricky part is the CP Rail bridge and the KK Ave bridge. The railroad swing bridge and the city street drawbridge are so close together they have to be opened at the same time. There's no room fora a boat between them. 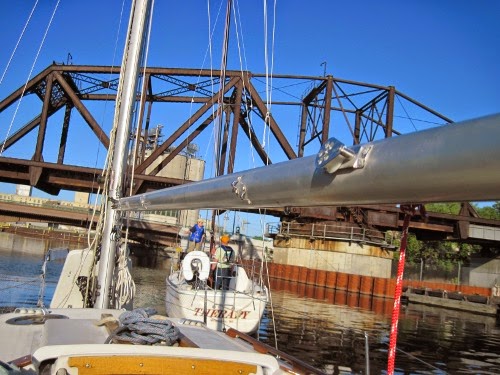 As we approached the CP Rail bridge, the bridge attendant was out on the far end of the bridge beating on it with a sledge hammer! Bruce called the tower and found out the bridge was broken; not moving. We started circling around in the narrow river; to one side a few large fishing vessels and on the other an ancient rusty seawall. After a couple pirouettes, I watched Bruce make another call to the tower and saw his shoulders slump. He called back to me “The bridge is fixed but an Amtrak is coming. We have to wait.” 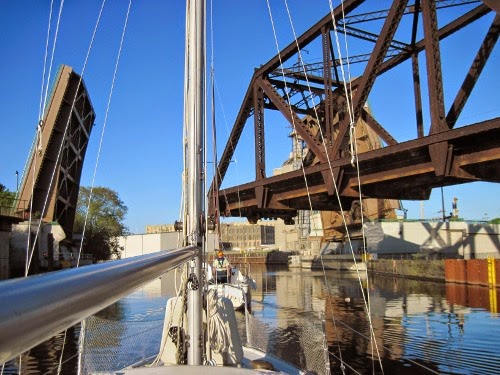 One more circle, two sailboats dancing mid river in the early evening. The Amtrak train roared across the river, not over our heads but just down the river way. As the rumble died down, the bridges began to move. The rail bridge swings downstream while the street bridge draws up in two halves. It is amazing how close they get when finally open. Bruce opened up the throttle and we scooted under both bridges. 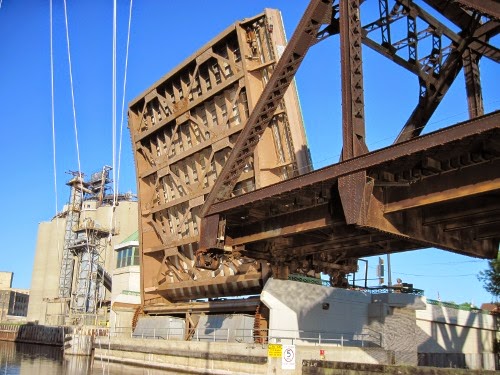 Most of the rest of the journey went smoothly. The Kinnickinnick is quite industrial on the way toward the lake. We went by all sorts of industrial buildings, some with wharves. There were boats stored in nooks and crannies everywhere. The grain elevators we passed hummed like hives. We passed under the beautiful I-765 arch and out into the breakwater area where we passed a couple small lighthouses. Even though I was under tow, I relished in my boat moving through the water. 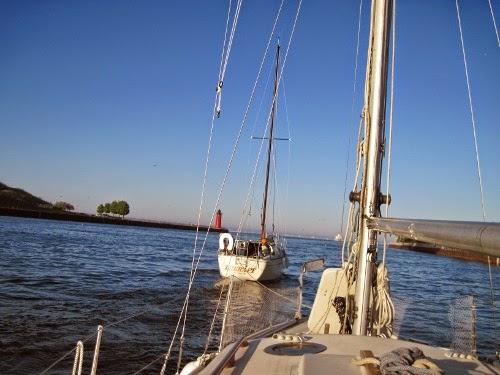 The breakwater area is huge and runs both north and south of the Government Cut where Milwaukee's three rivers join and enter Lake Michigan. McKinley Municipal Marina is at the very northern end. A beautiful line of fancy racing sailboats coming in off the lake caught my eye. Most of them had single sails that cost as much as I spent on my whole boat. As I enjoyed the boat porn, it occurred to me that they were all coming into the breakwater's northern entrance - right where we were headed! It was the Friday night race, I later found out. About half the racers were crossing our path and going into other marinas around town. The other half were headed into the same yacht basin as we were.

The folks at McKinley Municipal Marina were great. First, they happily took my 5 or 6 day reservation and allowed me to pay by the night so I could watch the weather and pick the right sailing day without paying for nights I didn't use. Then when I informed them I was getting towed in, they put me at the end of a T dock so that I could sail out more easily. 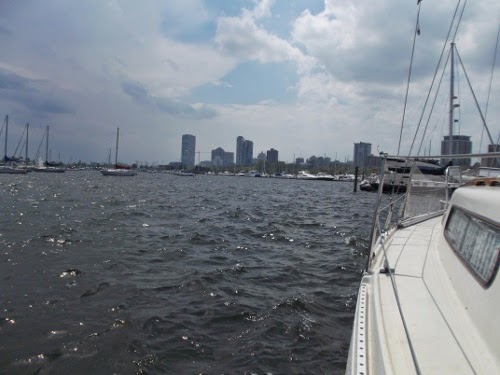 I let Bruce know where I needed to get. He was very helpful. We came wallowing in to the basin toward the end of dock 'B.' Bruce pulled me close enough that I got a stern line on a dock cleat. Going forward, I called to a boater who happened to be a couple slips down the pier. He caught my bow line and attached it. Bruce had been just tugging in low throttle to keep me against the dock. He tossed me my line and was off to find his own summer dock. I rigged a spring line, tightened the other dock lines and went to check in at the office. McKinley is a very nice facility with nice restrooms and showers. The marina is right next to the large Veterans Park and close to the art museum and downtown. A variety of shopping is within walking distance but marine supply stores are a drive. The marina gave me a couple keys for the gate and a hang tag for parking a car; all included. 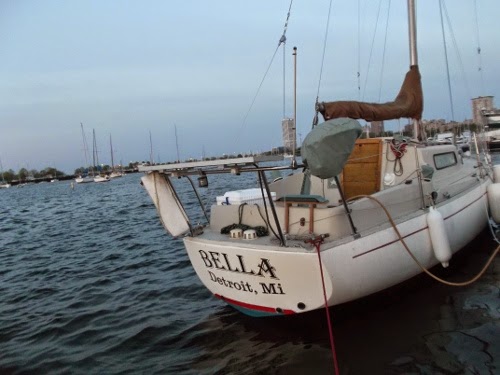 With no engine, however, conditions needed to be just right to be able to sail out of, and back into, the yacht basin. Conditions never were just right, the wind was often exactly wrong. A couple times we pulled the main sail cover off, but that just seemed to immediately upset the weather gods. A good part of the weekend, a train of thunderstorms marched up from Iowa, across Wisconsin and right over Milwaukee. With my flags regularly stiffly cracking in the breeze, there would be no daysail in Milwaukee. However, we were trapped at a wonderful marina, right next to a big park, with a coffeehouse right across the street. And my crew for the crossing was coming over on the Monday ferry.

===
Photos: some by Nancy and some by Bubba 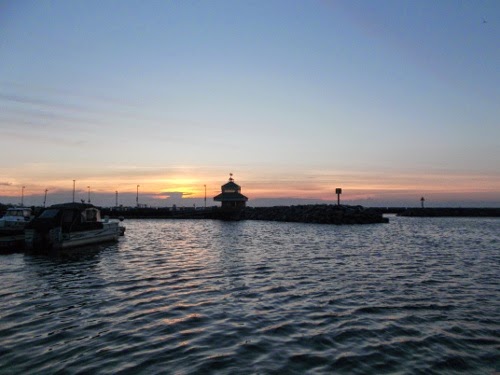 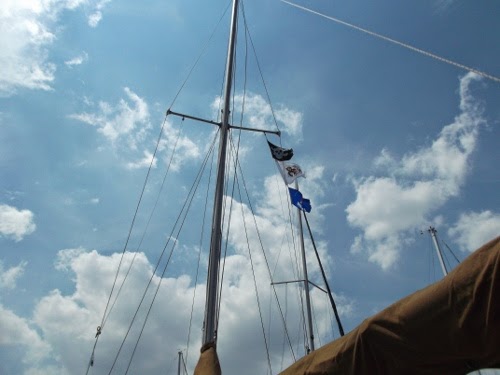