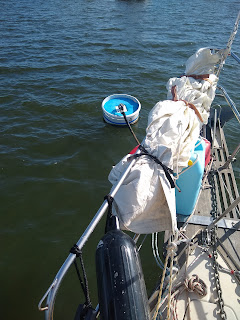 Today was a day like a day that I have dreamed about for many years. Just a mundane life on the water day.

I’ve been on a mooring at the St. Augustine Municipal Marina since Tuesday afternoon. It was time again for laundry and a run for basic fresh provisions. I had done some research online and decided to opt for the mooring rather than anchor out. The City has taken over much of the good anchoring ground for their three mooring fields. I have learned on the St. Augustine Cruiser’s Net on Facebook that boats occasionally drag their anchors in the two anchorages north of the Bridge of Lions. Often some poor sailor’s boat drags across the anchorage, knocks into other boats, and sometimes even collides with the bridge. The first anchorage south of the bridge is a long dinghy ride from the downtown dinghy dock. Further, boats there are actually anchoring between two submerged cable areas. A post on Active Captain claims that ‘no boater has ever snagged a cable’ in the area, but it seemed sketchy to me. Then the furthest anchorage south of town has actually had some crime against boats while they were unoccupied. Also, it costs $12 a day to use the dinghy dock anyway. So for $28 a night, I have a mooring, in a more secure area, with no cables to worry about, and just a short trip by dinghy to the dock.

I don’t have lights on my dinghy, so I don’t use it after dark. This morning, I got up before the sun, had my coffee and pancakes, and got ready for a day of errands. Nearly as soon as it was light, I packed my dinghy and headed to the dinghy dock. I had laundry, shower supplies, and the pee tank from my composting head. I got my clothes going in a washer and then went back to the dinghy for the tank which fits nicely into a reusable grocery bag so I can carry it discreetly. After emptying the tank, I returned it to the dinghy, and headed back to get the clothes into the dryer. While clothes were drying, I went across the hall to take a shower. The facilities are very nice at the Municipal Marina.

After folding the clothes, I took them back out to Ruth Ann and grabbed some boat parts I meant to sell. When I bought the other boat in order to get the engine, I also scavenged some other parts before we chopped that boat up and sent it to the landfill. I had two nice self tailing winches that I decided were too big for my boat and a nice old fashioned brass clock and barometer set. Besides needing to do laundry and get some fresh veggies, one of the reasons I stopped in

St. Augustine was the Sailor’s Exchange. Sailors all up and down the Southeast Coast know about the Sailor’s Exchange; it is a little marine consignment shop with a huge selection of used gear. I was hoping that they might be interested in my parts and I was looking for a couple things too. 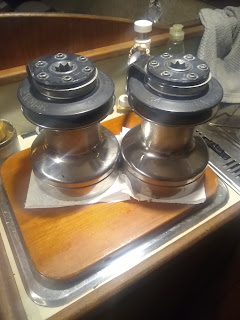 A further requirement for the day was my bike; my folding bike. It had been tied down in front of the mast since I left Wilmington. I lifted the boat parts and then the bike into the dinghy and headed back to the dinghy dock. It was a test for the bike. I’m already a little too heavy for the bike and today I added about seventy pounds of boat parts. Gingerly pedaling through the beautiful streets of St. Augustine, I listened for signs of strain but we did alright. It was about a mile to the Exchange where I traded for a couple parts I needed and a little cash. I had had them listed on Facebook marketplace, but got nothing more than a few tire kickers and one guy who wanted to know if I would find a way to ship sixty pounds of boat parts to Ireland.

From the Exchange, it was another mile and a half or so to PJ’s Asia One Market. I was looking for dried soy skin (also called tofu skin) which is very useful for living with limited refrigeration. Alas, they didn’t have any but they had tetra packs of shelf stable tofu as well as dried mushrooms and some other Asian treats for my galley pantry. From there, I went to a Winn Dixie that was on my way back to the marina. Fresh veggies, some apples, and some extra hot sauce were the main things I needed. I didn’t have room for much else, but I was still much lighter on the bike than when I was hauling boat parts.

It was 3/4 of a mile to the grocery and about another mile back to the marina for a four mile day, give or take, on my little Dahon/Ford Taurus folding bike. After another trip back to Ruth Ann, I offloaded my groceries and checked the status of my batteries. It was barely past noon. 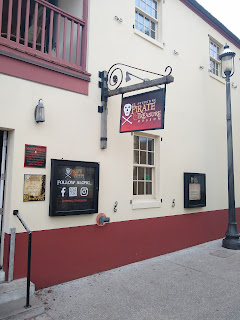 In a rash move, I fired up my outboard and went back to the dinghy dock. I had left my bike locked to the marina bike rack anyway. My friend, Tiffany, had suggested that I visit the pirate museum. What the heck. After pedaling through downtown again and up past the fort, I had some pirate fun wandering through the St Augustine Pirate and Treasure Museum; even with a couple groups of wild children. I poked around and got to read some history, and see some cool artifacts; real silver, real gold, actual pirate era coinage, tools, weapons, and other interesting bits and bobs.

After all that, I’m back on aboard Ruth Ann tonight, with my bike stowed on deck again. Tomorrow, I’ll get some diesel and water, and then be on my way. The outboard is still on the dinghy and there’s a bit of other prep work to be done before I can shove off.

The elephant in the room is that I am finally living the life I’ve been striving at for fifteen years. I can hardly express how I feel. It is momentous but I don’t yet have the words. The reticence is, in part, that it has been somewhat difficult to get this far. It was quite chilly for the first week and a half or so. Then I got clobbered by the icy weekend in Savannah. Today, I was in a t shirt and shorts the whole day. The sun has been down for almost two hours already tonight, but it is still 66 degrees. This is where I belong.

I made a reel on Instagram where I said that it was “so good to be back home.” People might think that I meant Florida, but I actually recorded that in the ocean off the coast of Georgia. The ocean is the home I spoke of. I am not enamored with the State of Florida, I just want to be warm this winter. I was on the East Coast, and so ‘warm this winter’ meant Florida and maybe the Bahamas. St. Augustine is definitely Northern Florida and it’s going to get cool again around here by the weekend, so I am still headed south. I’ll explore some work options when I get to the Fort Pierce/Stuart area, but I may end up in the Keys for a couple months just to guarantee that I am as warm as I would like to be for January and February.

If you enjoy this blog, please consider supporting the project. There is a link to become a Patron at the top of this page and just below that is a Paypal link for one-time donations. Even a couple bucks can help a lot. Thanks for your support.