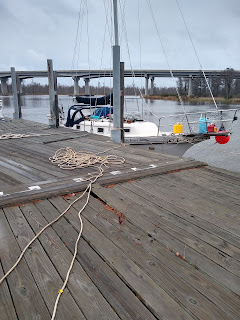 When we last left our hero, he had wrapped a line on Ruth Ann's propeller and was waiting to get hauled out a second time in one week on an emergency basis. Standing in his way was a yacht that needed to be extensively tested in the water of the slipway and a second boat coming up the river to be hauleld out.  The story picks up again, Friday afternoon, patience wearing thin, shame still simmering over the boneheaded move that got him here in the first place.

And then the other boat showed up. It was captained by Captain Jack who had actually helped Sam and I get a boat out of the way and get Ruth Ann into the slings of the travelift back on Monday. He had also been at the dock with my neighbors to catch my dock lines just before I had discovered the leak late Monday afternoon. He had brought a retired North Atlantic fishing captain as casual crew. Soon a workboat showed up behind them and rafted up at the dock. It seems that they had needed some extra fuel on the way up from Charleston. They had called Scott, another waterman, to meet them on the ICW with some fuel. He had decided to tag along just for fun, so they ordered takeout from a dockside seafood joint which Scott ran to get in his boat and then rejoined the caravan up the river.

Captain Jack asked me why I was still there and I told him of my plight. Scott, the workboat captain exclaimed that he had his dive gear with him and could help out. Have I mentioned that I’d rather be lucky than good? There I was with an anchor 40 feet deep and halfway across the river delayed by some fancy yacht languishing in the slipway. There was no reason for a diver to show up. And there was no reason for this diver to have shown up; he had just followed his friends for kicks. I was basking in a broad smile from the universe.

I asked him how much and he deferred to checking first with the office. “That’s the proper way, of course” I said, “but I’m not letting you get in the water before you give me a number.”

“Well, my kids are real hungry.”

When he came back, Scott said, “they seem to like you in there.”

“There are days, I’m not sure why,” was my rueful reply.

Amy, the office manager and another sweetheart (they are running a surplus at Cape Fear Boat Works), told Scott that he could do anything he needed to do ‘to help Todd out.’ So he started to get ready. For a couple hundred dollars, he was going to unwrap my prop, check it, and retrieve my anchor if that was possible.

Captain Jack and the other waterman told me that I was lucky that Scott was there. “He’s just crazy enough to take care of your problem.” Scott struggled into his wetsuit, complaining all the while about how complicated it was to dive in the Winter. Turns out he didn’t have all his gear, he just had a hooka hose about 40 feet long and a full size dive tank to feed it. The hose was only about as long as the river was deep, so rather than moving his boat out over the anchor, he tied the tank to himself and once he was in the water it was dangling between his legs. Captain Jack, also experienced in salvage operations, tied a small bouy on a line which we deployed off the bow of the boat he had brought up. Eventually, Scott came around to the dock near the bow, grabbed my anchor line and pulled himself into the black water; waddle swimming with the tank between his legs. He must have been in the water for forty minutes. It was nerve-wracking just standing on the bow watching bubbles come to the surface and drift down the river. Every once in a while a great eruption of bubbles would come up. I had to wonder how we could tell if he was stuck or just working. He had not taken the line with the buoy down with him!

“Who the hell has 60 feet of chain on a little sailboat like that!” he shouted in mock derision. “The chain was wrapped several times around a valve on that pipeline. It was tangled over and under itself, but I cleared it and then set the anchor in a spot of sand. I think we can haul it up. We might just get it back.”

My heart became light again for the first time in over twenty four hours. To wrap my own line around my own prop was such a boneheaded rookie move, I had been stewing in my own private shame ever since it had happened. Even the night before that fateful morning, I had sat in my cockpit with a friend talking about all the work I had done and my plans to head south. After fifteen years of work, and four boats, I had thought that I was done – thought that I was leaving. And it had all come crashing down because I had panicked and taken my eyes off the prize. That couple seconds of inattention carried such a huge cost it was unimaginable and nearly unbearable. And then I had spent all morning just waiting for when Ruth Ann could get hauled out for a second time. I was questioning whether I was actually cut out for the life I had worked so long to manifest.

Then when Scott had said so matter-of-factly that we might be able to retrieve the anchor – I could barely stand on my feet as all the positivity I had lost the day before came flooding back into my life.

Scott wrapped my anchor line on the delivered boat’s windlass and slowly pulled on the line.

“I think it’s working. Here it comes. Oh, wait we’re hooked on something … no, there it goes.”

The line came aboard slowly with Scott feeling the tension and signaling the other captain when to pause the windlass a second and when to start again. I watched as the 120 foot tag came aboard, then the 90 foot tag, then the 60 foot tag followed by the chain coming aboard. I couldn’t have wished that it were true. Then the chain went taught again. Scott waved for a pause, waited for the chain to settle, and then by some waterman instinct chose the exact moment to wave the windlass on again. There was a jerk and the then chain went loose.

“There we are.” Scott said flatly, “The anchor is off the bottom!”

I saw the shackle, then the shank of the anchor, and then the whole blessed thing. It was back! I was dumbfounded. The effort that this waterman had made just to get some stranger’s anchor back was astounding. But that is really how boat people are. We look out for each other and sometimes go to the end of logic and practicality to get another skipper out of a jam. I look forward to the opportunity to pay forward for what Scott did for me that day.

“Oh, by the way, I already did the prop,” he said. “That sturdy old school, two-blade propeller was beefy enough to take it and there is so little prop shaft outside the cutless bearing, there was no leverage to do any damage.” 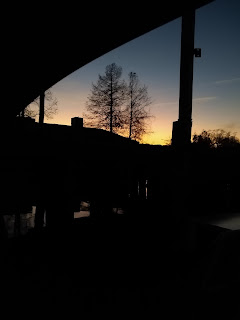 Relief. Such sweet relief I have never known. Now I was back on. Now I could actually leave.

During the afternoon, besides hearing that his kids were hungry, I had heard the guys talking about chicken wings. So, when I sat down with Scott to Venmo him the money, I gave him a 25% tip, and said ‘maybe you can buy the kids some chicken wings.’

Scott looked at his feet and said, “I gotta be honest with you. I don’t have any kids, that’s just  something I say.”

What a guy. Hilarious. He is one of us.

I hauled the anchor, line, and chain down the dock to Ruth Ann and threaded the line through the bow roller and down the hawse into the anchor locker. Down inside the cabin, I crawled to the bow, opened the storage cupboard and the hatch in the back to reach in and re-tie the bitter end of the anchor line to the boat. Then I hauled the line and chain aboard and carefully pulled the anchor into place. After that I walked the Bruce anchor I had absconded from one of Sam’s derelicts and put it back in place on its original bowsprit.

After trudging back through the yard, I caught Sam, Amy, and Samantha in the office and told them the news.

“Good lord,” Sam sighed with a twinkle in his eye, “Are you finally leaving? Am I finally rid of you?”

I told him that since there was not much daylight left, if he would indulge me, I’d be leaving with the mid morning tide the next day.

“That’s just fine,” he said, “this is not a good time to leave anyhow.”

And so I spent one more night at the dock. Poor Ruth Ann had been at the Cape Fear Boat Works yard since July 2019. She was as anxious to leave as I was. I cleaned up the decks a little and went below to make supper and get some sleep. I slept like a stone. As long as I didn’t screw something else up, I was finally on my way. I was finally living the life that I had been striving for most of my life and actively pursuing for more than fifteen years.

“Incentives are important. I learned that in rehab.”