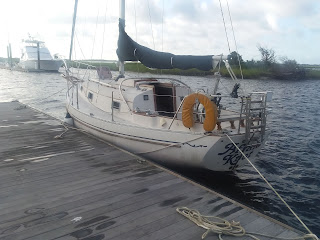 I named my last two boats after important, powerful, early twentieth century anarchist women. Emma Goldman, namesake of the Westsail project, was an important writer and political activist; especially around the First World War and birth control. Wikipedia says “During her life, Goldman was lionized as a freethinking "rebel woman" by admirers, and denounced by detractors as an advocate of politically motivated murder and violent revolution. Her writing and lectures spanned a wide variety of issues, including prisons, atheism, freedom of speech, militarism, capitalism, marriage, free love, and homosexuality.” We need more people like Emma.
I named my little daysailer after Lola Ridge, an anarchist poet and editor of avant-garde, feminist, and Marxist publications. She was a confidante to Emma Goldman and worked with both Goldman and Margaret Sanger. I thought it was especially appropriate that my little boat that was keeping me sane while I waited to return to the big boat was named after someone who had worked with the namesake of that bigger boat.