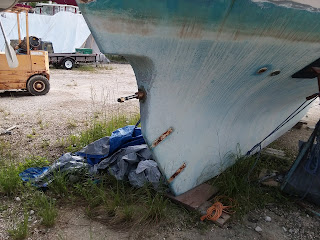 Sometimes I have to re-read my “I Really Don't Give A …” manifesto just to keep doing what I do. Some people may suppose that I have some kind of tenacity to still be working on this project after all this time. The truth is that I am a bit too stubborn, but mostly too dumb to quit at this point. And yet some days are not so easy.

When I started this journey I came up with a slogan. It began a bit of a joke, but solidified into the underlying philosophy of my vagabond life.

I haven’t fully escaped on a boat yet, so the slogan hasn’t been fully implemented. It has, however, guided my life. Even now, where I thought I was going, and where I wanted to be are subject to changes wrought by this guiding philosophy. After months of wrangling at one job and ultimately switching jobs just to get to a part time schedule, last week I negotiated to become less part time already. My vagabond philosophy turned me around and changed what I thought I was doing.

It will help to start at the beginning of my current situation. In January 2016, I bought my boat, s/v Emma, sight unseen from Michigan because she was exactly the boat I wanted. She was also one that I could afford because she had been neglected ... and had no engine. Buying the boat and moving to Florida took most of the money I had at the time. I went to straight to work near the boat to get back to flush. Soon after, I found a lovingly rebuilt engine at a great price and was able to jump on the opportunity. It was several thousand dollars and most of the boat money I had accumulated by then. I am basically earning the funds to refit Emma as I go along.

My poor engine sat in a shed at the marina for 14 months and through two hurricanes; not exactly Plan A. It came together last month for the normally-very-busy marina mechanic to have time to align and install my engine. I am doing as much of my own work as I can, but the prospect of aligning the engine was keeping me up at night. It was a critical project that was not going to be easy and -- today --  I am still not a very good diesel mechanic. When it became possible to have a pro do it, I jumped at the chance. Walton came up with a project plan which I approved without a formal quote. I know … I know. But the work had to be done and a window opened to have it done professionally. Not to mention that the meter had been running all along and I was paying for engine storage in the shed.

My boat had a couple metal rails in the engine space where an engine had been. The engine I bought was not the same as whatever engine had been there. The work that needed to be done included lowering the engine into the boat, marking and then removing the rails, modifying, strengthening, and re-installing those rails, aligning the engine and driveshaft, replacing the cutlass bearing and then bolting everything down. Even if I had been able to successfully complete all those steps, it would have taken me months of trial and error and learning by doing to accomplish.

After I said ‘do it', in a moment of panic, I ran to talk to the ladies in the office and made my bargain. I had said, “I’ve approved Walton’s plan, but I don’t have any idea how much it’s going to cost, it may take me a couple months to pay for it all. If that’s not OK, then we need to slow him down and run some numbers.” Beside the normal interruptions of being the one on-site mechanic, Walton's work never stopped.

Last week, I came home from the new gig on the road and saw the driveshaft sticking out Emma’s stern tube. This is great news … and not so great. When I paid my boatyard rent for June, I got the bill for all of Walton’s work. I really never had any idea what it might cost. Occasionally, I thought it would be fairly inexpensive; other times I just didn’t want to think about it. The bill was actually almost twice the highest number I had worried about. Oh, boy.

That brings us back to “less part time already” from above. My new trucking gig is with a small company that I had briefly driven for before. My new schedule was going to be one week on, one week off. I had visions of huge numbers of boat projects getting crossed off my list. That schedule lasted exactly one month. To pay the marina off in a reasonable time, most of each paycheck would have to go to them for a while. I’ve had a couple weeks like that and it isn’t much fun to have to lay low without the funds to do much boatwork. I decided to take the initiative and pick up some more time at work. So, I went from every other week to three weeks out and one week home. I’ll still get a little bit done in the short term, but more importantly I’ll be able to pay my bill and keep the marina fairly happy.

I don’t mean to be coy about financial numbers, I just felt they would be clumsy in the narrative above. I am doing this project on practically no money, but that was the basic plan anyway. I want to show that a big dream can be accomplished with small cashflow. I bought my boat for $6000; and then moved to Florida. The engine I found was $4000 and the storage, plus labor and miscellaneous parts to install the engine was another $5000. Beside this $15,000, I have about $2000 in other parts that I had previously purchased. By the time I dress up the interior and get some electronics and other equipment, I will probably spend another $8000. Importantly, I will have done so much of the work myself that when I’m done I will have an intimate knowledge of my boat and her systems. This will help me keep future maintenance costs down.

The week I moved to Florida back in 2016, a Westsail 32 only a couple years younger than Emma, but painted, polished and ready to sail, was listed near me for $52,000. Now, they weren’t going to get their initial asking price, but they likely got between 25 and 30 thousand for her.

Even if we get in the water and I hate it, I can sell her without losing my shirt.

I am in a really good place right now. Confident, relaxed and right with world in more ways than usual. I had two conversations recently t...