They parked a nice looking Westsail 32 right next to Emma and me last week. Today a marine surveyor showed up to do an inspection for the new owner's insurance.

“I don’t know if they set it right there to inspire me or to taunt me,” I said.

“Oh my goodness! Would you look at that.” 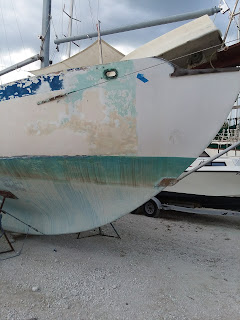 layers of paint off her hull. I don’t blame him for not recognizing her. He went on to tell me what a solid ocean-capable design I had - very rugged boats he said. I explained that I had found her in Miami with no engine and brought her here because I knew the marina and the people who ran it.

“How did you get her up here,” he asked.

“With no engine! Gosh, that’s brave,” he exclaimed, “You’ve got to have a certain confidence in yourself and your boat. Well done.”

I didn’t tell him that it was the first time I had ever sailed her. It is only unusual to sail a boat with no engine because most skippers wouldn’t do it. It is not so brave; not some heroic endeavor. People were sailing boats without engines for thousands of years. It had to be done and Pete and I did it.

He inquired what engine I had bought for her and raved when I told him it was an old Perkins 4.108.

“That’s perfect; a wonderful engine for her,” he said. 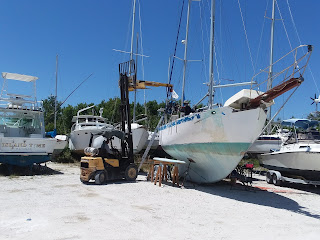 And as if by magic, just as we were talking, the marina guys pulled up with my Perkins engine to drop it in the boat for a dry fit. The surveyor had a couple Westsail questions for me during the afternoon and we chatted a few more times. I helped him find the other boat’s fuel tank and took a good overhead picture from up on my boat for his report.

I can’t wait to get Emma back in the water. We are going to be one hell of a team.