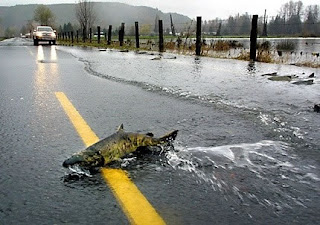 This strange afternoon on the road was the perfect sequel to my recent post: Five Crows, an Eagle, a Skunk and an Umbrella.

I was having a pretty normal work day. My route that morning took me to a store in Fort Lauderdale and two in Plantation. I was done and heading back to Vero Beach when I passed a car carrier as he came down a ramp onto the highway. Those carrier guys are all a little crazy, so in short order he was passing me.

He had just got into the right lane ahead of me, and a couple cars were already working on passing us, when an eagle flew up out of the median and across the left lane. As it was headed into the path of the other truck, I subconsciously chanted “no, no, no!”

Right at the last moment, the eagle jerked back over the cars, but seemed to drop something. In the 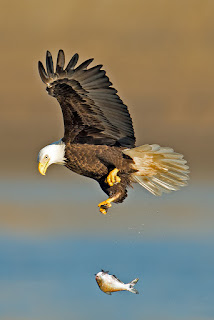 spastic course change, he even looked over his shoulder like “Damn, man. I dropped it!”

In a matter of seconds, I drove by a fish lying right on the dotted line of Florida’s Turnpike. I haven’t been a fisherman in a long time, but it was a nice looking fish, if I could make such a determination at 65 mph.

So, if you get where you’re thinking you’re having a bad day, remember my friend the fish. First, she was snatched out of some peaceful pond by an eagle, determined to eat her. Yet instead, she gets dropped onto a major highway, where she’ll bake in the sun on the crummy pavement until some car runs over her. Poor fish.
===
Road fish image from here.
Fish drop image from here.