Five Crows, a Bald Eagle, a Skunk, and an Umbrella 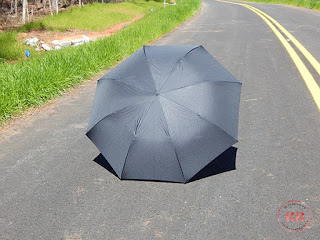 Two posts ago, I described my travels to Annapolis for a couple seminars. I stayed at an AirBnB which was about 2.5 miles from where the seminars were held. I decided to walk it; though I did get a ride home on Friday. The last part of my morning walk was down Edgewood Road; a pretty major road with apartment complexes on either side leading out to a cluster of marinas and marine service vendors at the water.

On Saturday during my walk home, a woman coming the other direction in a Prius, slammed on her brakes as she got even with me and screamed: “There’s a bald eagle! That was a bald eagle!! Did you see it?”

I hadn’t seen her eagle that time, but on Sunday along the same stretch of road, I saw five crows chasing a bald eagle with a limp squirrel in its talons. The eagle really is a majestic bird when it is flying for all its worth!

And … that wasn’t the strangest thing to happen on my walks.

I had arrived in Annapolis Thursday evening. As I settled into the house, I met Storm, the house dog. 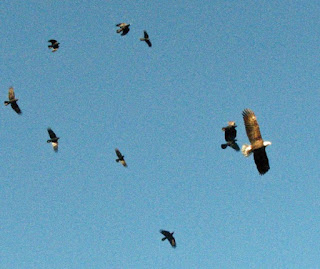 We became fast friends and I got my dog fix for the month. Friday morning I had a leisurely bagel and coffee with my host. As we chatted, I was scratching Storm behind her ears. I had a friend for life.

In the last quarter mile of walking to the first day of the seminar, I came across an umbrella beside the road -- open. Just the week before I was walking back from the grocery store as the fringes of Hurricane Maria passed by and the wind bent one whole side of my umbrella. I was in the market for another.

The umbrella on the side of the road was a nice one; well built, not cheap. And it was one of those that collapsed down to about a foot long. As I moved the umbrella around, opening, closing and collapsing, I caught a whiff of skunk. Was it the umbrella … or something on the wind? Just to be sure, I sniffed the umbrella.

Yes -- standing on the side of Edgewood Road, Annapolis, MD, under a stand of pines, midday Friday, for all the world to see, or anyone else attending the same seminar, I sniffed an umbrella.

I decided it must have been the wind and I stuffed my new umbrella -- courtesy of a benevolent universe -- into the front pocket of my backpack.

The seminar started at the Port of Annapolis Marina and we finished the day at Chesapeake Sailmakers’ sail loft. The seminar was packed with twenty two sailors of all shapes and sizes with boats from all categories attending. I met a super nice couple from New York. They had driven down in their sleek red Tesla and gave me a ride -- me and my backpack -- from Port Annapolis to the loft. In fact, they sort of adopted me that day and gave me a ride back to the AirBnB on Friday evening too.

Back at the house, I went upstairs to my room, threw down the backpack, checked my email and began thinking about dinner. Storm came up to greet me and poked her nose, and then the rest of herself, through my un-closed bedroom door. I heard her coming in and turned to greet her. She came through the door and halfway across the room sheepish, but wagging her tail like crazy.  Until, that is, she got even with my backpack, when she froze and started sniffing at the front of it. I shooed her out of the room and with some trepidation, I retrieved the umbrella.

After having been closed up in my backpack all day long, I could REALLY smell skunk! I don’t think the umbrella took a full, direct hit from the skunk, but I think someone must have fended off a glancing skunk spray somehow. Luckily, I had brought a couple trash bags with me. The forecast had called for rain and if it had, I would have kept my notebook and everything dry in a trash bag inside the backpack. I wrapped the umbrella tightly inside a trash bag and put it back in the backpack. Since Storm already knew it was around, I didn’t want to put it in the garbage at the house. On my walk to the seminar the next morning, I found a trash can along the way and got rid of my precious umbrella. I thanked the Universe for thinking of me, but I passed on that particular one.