Hurricane Matthew passed by Fort Pierce last night; a fair distance offshore luckily. A week ago, it became forecast that he would come pretty close to Riverside Marina where I keep Emma. I asked my dispatcher that one of my next couple loads be to Fort Pierce so I could sneak 30 or 40 minutes to prep the boat for the storm. With a Walmart Distribution Center right in Fort Pierce, it is fairly easy for me to get a load there. The dispatchers at this company seem to take good care of me. My very next load assignment was to Fort Pierce from Savannah, GA.

I've discovered a spot on a nearby side street where I can park my semi, trailer and all, and walk a few hundred feet into the marina gate. After I delivered my load, it was about 3:00 in the morning and I had the streets to myself. Out past the Publix on the north side of town, I turned down Naco Road and coasted down the hill. Right before the stop sign there is a patch of cement that used to be a driveway. Pulling into the grass and parking the cab over the cement, I could get out of the way and off the street. Several times I've parked here for an hour or two and had no trouble.

I punched "Off Duty" on the eLog terminal and climbed out of the cab. Right by the door, I keep a headlamp and I pulled it on. The street is always quiet out here. The marina is on Old Dixie Highway. When a street is named Old Dixie Highway you know that traffic has been usurped by some newer thoroughfare. Federal Highway (US 1) is just a block up the hill.

I crossed the street and walked around the huge puddle that always collects just outside the railroad tracks from the marina after a rain. In the gate, I stepped into the jungle of boats on cradles. Lots of puddles and loose wet sand let me know a good rain had passed by recently. Crunching through the gravel, I glanced at a few boats where I knew others were living aboard in the yard. Several boats have permanent residents. Some of these boats are here for a couple weeks and quick projects. Other boats may never leave, but several in various stages of repair or neglect are lived in. I was hoping that I wouldn't wake anyone but the crunching of my feet was soon drowned out as a train roared by reverberating the steel on steel thrum of the train's wheels and the screech of her horn in the heavy humid air.

I can't tell you the gentle swell I feel in my heart when I come around the catamaran from Thunder Bay, Ontario and see my girl sitting there in the moonlight. Emma was waiting patiently. She seemed to understand that I have to stay away for a time to fund her resurrection. When Emma was first hauled out, I borrowed an eight foot orphan section of an extension ladder. I told Jason in the yard that I had it. He thanked me and said they would come get it if they needed it. Whenever I come home, I worry that they've needed the little ladder, but tonight it still leans against Emma's ribs, tied at the top to a couple stanchions. 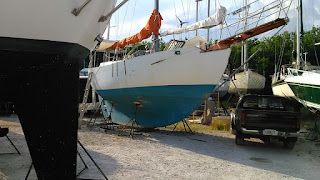 My mission that night was to prep Emma for the coming storm. I climbed the ladder and stepped onto her deck. It is good to be here, my girl. The tarps that have kept the heat of the sun off the cabin roof came down. I folded them and collected the lines and bungie cords that had held them. Its amazing how much differene the shade has made to the temperature inside the boat. Next, the dinghy had been leaning against the port side lifelines in perfect wind catching position. I hauled it toward the bow and tied it down against the sampson posts. The forward hatch doesn't have a latch and I was concerned about it getting lifted in the wind. The dinghy was now tightly lashed over the top of it. Two birds, one stone. I went below.

In the cabin, I double checked that all the portlights were shut and dogged tight. I checked the bilges and  did a walkthrough just to recheck all that I thought needed checked. I decided to disconnect the solar panels from the charge controller. I wasn't sure how much that would help or hurt but if panels got blown down and were shorting out, maybe it would prevent catastrophic damage to the battery bank.

Back in the cockpit, I thought I heard someone stirring about. An older guy lives on a close boat back toward the fence. I didn't want to look over there, squinting in the dark but shining my headlamp directly toward his boat. No one said anything and I was busy, so I carried on. I took a long look around the deck. Everything looked as good as I thought it could get, but I grabbed spare python strap and snugged up the lines holding the dinghy down.

I climbed down my little ladder and did a walk around Emma from the ground. From the corner of the Thunder Bay catamaran, I gave her a good look. Puffing my chest, I tried to imagine hurricane winds, or at least the big bad wolf, blowing across her bow. There didn't seem to be anything more for me to do. I walked back through the maze of boats; crunching as I went.

The ground is a crusty blend of packed earth and leftover concrete. The property used to be a cement plant. On top of this crust is a blend of human and boat trash. As I walked back to my semi, I passed extension chords running every which way, pieces of rope, bits of hose, various bottle caps and crushed cans, a right foot sandal, a maxi pad, the lid to a shoe box, several chunks of rigid foam insulation, some boards and the frame for a bimini. Not everyone here are slobs, and I can empathize with getting distracted after having set something down "for just a minute." Nevertheless, some are not taking the care they should. That is exactly the reason, especially on a small boat, that everything have a place and everything get put away when not needed. Its a part of good seamanship actually and that should extend to the boatyard. I'm not perfect either. There is a stainless steel aft pulpit I left hugging Emma's bow on the ground and a bucket with about forty feet of chain under her hip. Its more out of the way there than on deck, but still a little low class.

The air was heavy with the humidity of the recent rain, but there was no sign of the approaching storm on the wind or in the clouds obscuring the stars. I walked out onto the street and climbed back up into the cab of my semi. There wasn't anything else I could do but hope that Matthew would go easy on me. And I had to hit the road for Savannah. 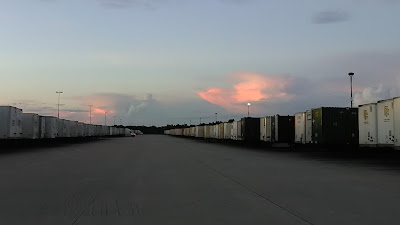 Just by chance I had asked for the next Sunday and Monday off. I'll be home right after the storm to assess if any damage occurred.
at October 07, 2016