This is Part II of the Miami to Fort Pierce trip. For Part I, please click here.

Pete and I watched the sun go down over Boca Raton and then come back up over the Atlantic Horizon as we passed Jupiter (not the planet, the town in Florida). The night was clear and billions of amazing stars twinkled in every corner of the sky. My crew saw a dolphin, but there wasn't much for wildlife other than the phosphorescence we saw at night as nearby waves disturbed the water. No ships were near enough during the night to cause us any concern.

Being able to watch a beautiful sunset and still be there when the sun rises is like going to church for me. In the morning, a fuzzy line at the horizon began to emerge out of the darkness. Gradually the line hardened in soft colors, clouds became discernible and the sky changed from black to blue and grey. Soon the whole horizon splashed with purple, peach and orange. And finally, with the sun peaking through, the sky filled with the yellows and oranges of a new day. It was sublime and holy.

Once we got to Fort Pierce, the wind was blowing straight down the channel [Editor's Note: sound familiar?] Damned if I didn't try to sail in anyway. While Pete was telling me it couldn't be done, I inched my way toward the last pair of day markers. We were out of the channel a bit as I tried to slice the wind thin enough to make it in under sail. The Fort Pierce Inlet has a dogleg turn about a third of the way in from the Atlantic. If I just could have made it to that turn, we might have sailed all the way in. Alas, Pete was right – dammit – it couldn't be done. After gently bumping the bottom, testing Emma's patience, I pushed the tiller over and we spun back into open water. We were starting to get the hang of sailing a cutter. Patience with the jib sheet is critical, but even with a couple rank amateur cutter sailors, Emma tacked nicely for a heavy girl.

And we called for another tow. Happily, this one was considered an emergency. Pete and I made a big lazy circle toward open water and just as we headed back toward the inlet, our tow was already steaming toward us.

As I was pushing my luck trying to sail through, a Coast Guard cutter (same term, but not a sailboat) came by, passing us as she headed in. As we were towed past the Coast Guard Station, home to the cutter we'd seen, the Commanding Officer spotted us and sent a launch to investigate. The Coasties later told us the CO was convinced on seeing an old sailboat getting towed, we must be drug smugglers.

I had told the marina that we would arrive Thursday afternoon or Friday morning. Having arrived at 8:30 Thursday morning, we were really early (thanks, Gulf Stream). Further, there is some kind of friction between the tow boat company and my marina. Towboat/US wasn't going to tow me in until they talked to the marina manager. Apparently, the tow guys were worried about being able to maneuver Emma, or any boat, into the slipway without damaging theirs or anyone else's boat. Riverside's channel is tight and the docks are full of boats of every variety; sailboats, fishing boats, catamarans, trawlers, etc.

When it was all said and done, I couldn't get into the marina at 8:30 am because Emma and I were
scheduled for the afternoon; they had a full schedule for the day. Fair enough. They planned their day based on when I said I would be there. Towboat/US towed us to a spot off the Intracoastal Waterway, next to a spoil island and right across from the marina. We dropped anchor and as I signed the tow bill the USCG launch hovered nearby.

“Don't worry, they're just training,” the tow captain assured us. 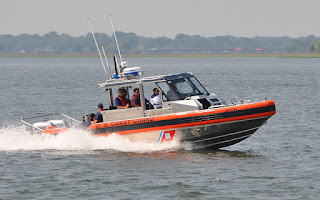 When the launch arrived, however, we learned we were suspected drug smugglers. The Petty Officer chuckled and said “I could see how high your boat was floating in the water. I knew you weren't smuggling anything.” We got the inspection; PFDs, fire extinguisher and – oh, shit – a signaling device. I meant to grab a bag out of storage that was stuffed with miscellaneous boat stuff – including a couple air horns and a whistle – regulation signaling devices. I had no such device; a USCG requirement. On top of that, my crew's passport and license were Canadian; a whole different number to call; a different system to check.

Nevertheless, since we were nice guys and cooperative, despite the boat being a mess from the overnight passage, but mostly because the Petty Officer knew from our conversation that I was headed right across the river to be hauled out for more than a year, we got a pass for the missing signaling devices.

Mid-afternoon, Towboat/US came back to tow us in. Emma was skillfully nudged into the slipway. Riverside Marina hauled her out of the water, pressure washed her hull, and parked her out back on jackstands. We're in the northwest corner of their yard. I can't say enough how well I was treated by Towboat/US at each end of the trip. Riverside not only took care of setting Emma in a safe spot 'on the hard', but they have been great to work with ever since.

Emma is in her new temporary home and my work has begun. Finally, all my stuff is in the same 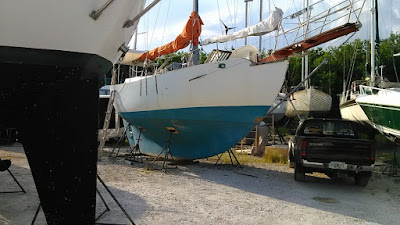