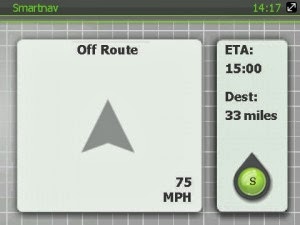 The road undulates over the hills. Pastures, farms and patches of forest alternately flys by just over the ditch on either side of the highway. A hawk soars in lazy arcs over the right-of-way fence. And on the dash, the GPS flickers every quarter mile or so to update the perspective of its little map. The sad fact is that many drivers are paying more attention to the 4" LCD screen on their dash than they are to the hawk, the trees and the landscape.

As a salacious billboard crests the hill, the driver is suddenly hungry and takes the next exit. The drive-thru window is a half mile down the side road. Halfway there, the GPS starts to blink "OFF ROUTE . . . OFF ROUTE . . . " Off Route is how this last week went for me.

I resigned my Commercial Driver job, the whole career actually, to get off the road, out of the snow and ice, and to devote more of my time to writing. It was a solid plan supplemented by a training program, that would lead, most likely, to a new job. The new skills would not only help with my own boat project, but could easily be applied to future work in and around marinas and boats. Though I had almost enough cash to make it through the training period, I was halfheartedly some kind of part time work to keep me out of trouble. Perfect!

The last two weeks have been great. I've been working hard to "detox" myself from the dust and diesel of the road. I've been meditating, exercising, eating well, working on my music stuff, and writing. I set up an rigorous hourly schedule; like Summer Camp in January.

On Wednesday, I got a call from the Community College doing the training. Due to "modified hiring projections" at the sponsoring employers, the start of the training would be delayed for a month. A MONTH!! I've been unemployed for two weeks already. Much as I'd like to, I cannot go 10 or 12 weeks without any income.

Like a jab from the twin tines of a meat fork, my frustration at the disruption and the necessity of amping up my job search had blown my rigorous schedule to pieces. I've got some good job leads, though, and I can afford to be picky. The Bubba the Pirate Motto has always been "Eat when you're hungry, work when you're broke." It wouldn't be nearly as poetic if I had said "go back to work just before your broke."
at January 15, 2011