Don't wait for the Lottery 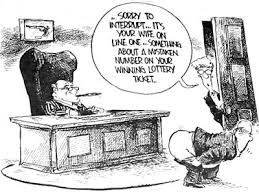 Back in 2006, I was working with a Life Coach on my career options. She was very good and we dug deep. Despite working on a career transition, I ended up realizing that what I really wanted to do was some long term voyaging on a sailboat. Early in 2007, I started doing just that. I bought a boat that I could afford because it needed some work and set out on my path toward sailing off. One of the coaching tools we used was the question: What would you do if you won the lottery?

So the next even more serious question is: why aren't you working toward that goal now? If you really want to do something, not having enough money is a cop out. There are versions of your dream that are attainable. Perhaps, your current priorities are just not focused properly.

There are many ways to pursue the course you would choose. If you map out, intricately, the choices you have, and the choices you've made, you can find a way to walk the path you dream of. It will not likely be a straight line. It will be difficult, gut wrenching hard work. Nevertheless, it is possible to pursue some version of the life you wish you had. Why on Earth would you do anything else?

In Finance, there is a concept called the "present value of money." Its a bit like what J. Wellington Wimpy means when he says "I'll gladly pay you Tuesday for a hamburger today." The hamburger is worth more to him today and the price is too low for the cook to wait until Tuesday for the money. Wikipedia says Present Value "is the value on a given date of a future payment or series of future payments, discounted to reflect the time value of money and other factors such as investment risk. Present value calculations are widely used in business and economics . . ." Blah, blah, your present value of winning the lottery is ZERO. It is such an incalculably small probability that it just ain't gonna happen.

Moving yourself toward your goal, by whatever baby steps you can, you create forward motion. Without motion your dream's present value is basically zero. With coordinated action, there is a life changing space that opens up in your heart when you are doing what you really want to do. Your feet no longer shuffle aimlessly down an indiscriminate trail. You are walking the path that leads to your dream. It is not possible to calculate the positivity. Your life is your own and you have moved the present value calculation of your dream to priceless.

The way the lottery works, NOT winning does not affect our lives at all. With 14 Million to One odds, we can't really expect to win. The odds cannot be improved no matter how we play. Winning would certainly change anyone's life, but there is little chance of that happening. Yet when you begin your own work toward your own goal, you are improving your odds at every step. The only downside to going your own way is that the gut wrenching work is going to take longer than you expected. You'll have heartache and pain, travails and tribulations, delays and dead ends. Nothing good comes easy.

Recently, I became troubled with my life as a truck driver. The road chafed and I just wanted out. I've developed a good plan. In considering my work options though, I did some long overdue project planning. I came to realize that it is going to be difficult to finish the boat next summer. I need to plan on being in Michigan into 2012. It was a crushing blow, but I wouldn't have it any other way. I'm doing exactly what I want to be doing. The disappointment is tempered by the knowledge that every day I am closer to my dream. The heartache dissolves into the satisfaction of remaining on my path.

I understand that not everyone is able to make the same choices that I made. Further, no one's dream will be just like mine or anyone else's. I don't think that defeats the argument. If you focus on what you want, you can find a way to get closer. And just like the unexpected twist of my coaching experience, you may pursue something long enough to find out it isn't what you want. You may stumble upon something better. Keep trying! Those people shuffling aimlessly, staring at the dust kicked up by their shoes are not going to get anywhere. They are not going to be happy. If you look to the horizon and concentrate, you will find your way.

===
Postscript 2014/10/30
I'm still in Michigan just until next summer. I have a different boat than the one I was working on here. See the beginning of the new boat series here.
===
Postscript 2016/01/30
There's this thing about mice and men and their plans. Anyway, I helped deliver a Westsail 42 from Stony Point, NY to Florida in early 2015. After that, I joined the cult. I didn't want any other boat. Find the start of that here. I found a neglected Westsail 32 floating on a mooring in Miami and bought her. The refit will likely take into the Spring/Summer of 2018. That story starts here.
===
Postscript 2018/11/29
I am in Michigan for several months, helping the family. Emma is about half way to being back in the water. When I get back to Fort Pierce, she'll be waiting. I figure I have about 6 months of work to get her launched again. Stay Tuned.
===
Postscript 2020/09/18
I was actually in Michigan for almost a year and a half. In the meantime, I sold poor Emma and subsequently ran into an older gentleman who wanted to find a good home for his Bayfield 29. I'm on the road, making some money, and semi-quarantined. In February, 2021, I plan to get back to that boat and get her in the water.
at January 11, 2011