Trying To Sleep On A Sinking Boat

Part One of A Tale of Two Screw Ups 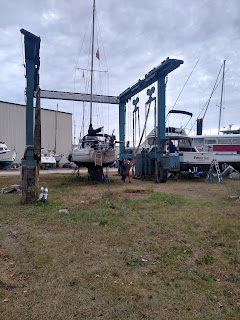 I had arranged with the boatyard to launch on Monday, December 5, and spent the weekend finishing the final details and packing up. Also, Sam, the boatyard owner, is going to let me leave my little trailer here until May. I had listed a few things for sale and figured out that all my stuff wasn’t going to fit aboard. After getting not one nibble on any of the things I had listed and after running out of room on Ruth Ann, I had to do something. Sam is an old soft at heart and directed me to put my trailer in a corner where he couldn’t store a boat anyway.

Come Monday morning, I was ready. Sam was offsite for most of the day and tricked me into breaking one of my rules because it was a Monday, not a Friday. I had always said that I wouldn’t launch on a Friday, especially late in the day. If I had started down the river and figured out I had a problem, it would be a much bigger problem if everyone at the boatyard had already gone home for the weekend. I wasn’t thinking of this on Monday and anyway I was enthused to finally launch Ruth Ann. She has been in this boatyard since July 2019.

Sam came crashing back into the boatyard about 3:30 pm and said “Let’s get you in the water.”

There was a boat in front of Ruth Ann that had to be moved. Sam grabbed it with the big forklift and we dragged the blocks and jackstands over so he could set it back down in a new spot. Then he got the travelift, a U-shaped crane for lifting large boats, and came for Ruth Ann.  She was strapped and lifted off her jackstands, then the crane gamboled across the yard with Ruth Ann swinging gently under her.

At the slipway, Sam lowered Ruth Ann toward the water, pausing so that I could climb aboard the bowsprit. After she was all the way in, with the straps loose but not removed, I went about checking for leaks. Ruth Ann has six thruhulls for various inlets and drains; plus a brand new packing gland that I installed where the propeller shaft leaves the boat. With a flashlight in hand, I checked all the those spots and all was well. I kind of glanced in the bilges but I wasn’t worried so much about that space. There are no thruhulls or other connections in the bilge and earlier I was letting a portable air conditioner drain into the bilge and it had been holding water. I just had to pump it out every few days. 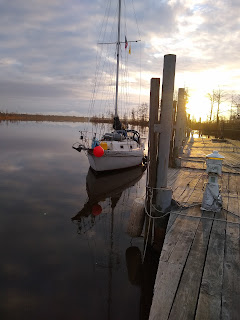 I started the motor and checked it over. I goosed Ruth Ann in forward and then reverse. Satisfied, I signaled Sam and he lowered the straps the rest of the way, so I could back out. Sailboats don’t go backward very well in normal conditions and I hadn’t been at the wheel in over three years. It was not graceful, but I made it out into the river and parked at the dock. My former boatyard neighbors and a couple other people grabbed my lines, I wandered back up and put away my ladder and threw away a paint tray and a used roller. On the way back to the dock, I had a nice chat with Sam and presented him with an Army P-38 can opener that I had found (an inside joke).

Everyone went home and back at the boat I started thinking about supper. When I casally checked under the engine hatch, I was surprised by the amount of water under the prop shaft. I looked under my galley floorboards and was shocked by a huge amount of water in the bilge. After rechecking in the engine compartment, I realized that I had finger-tightened the packing gland in the morning, but hadn’t gone back to tighten it up. While running the engine, I spun the nut right off and water was coming in around the prop shaft with no seal! 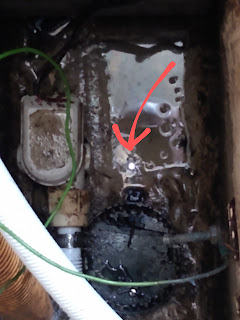 I fixed the leak, turned on my electric bilge pump, and started pumping with the manual pump as well. Soon the water level had gone down significantly and I let the electric pump finish the job. As I watched, there was a strange little gush of water near the bilge pump. I thought that it was leaking air; that didn’t seem right. Something was amiss, so I watched it as the last of the water started to drain. But when I turned the pump off, the water started to rise again. Looking more closely, I realized that the little gurgle of water was a leak. Water was coming in! I was sinking!!

I texted my boatyard pal, Mike, who works for Sam and asked if he had some emergency epoxy or an extra pump. And I called the former neighbors, Grace and Jeff. No one had epoxy. I’m ashamed that I didn’t have any, but I don’t know that it would have worked under pressure. Mike scrounged up a large bilge pump and crimped some alligator clips on it for me. I had portable manual pump that I dug out as well.

In the end, once I got the situation under control, my bilge pump could keep up. The good news was that I wasn’t going to sink; the bad news was that the bilge pump was going to kick on every twelve or fifteen minutes, whine for five as it pumped, and then go through a dramatic Shakespearean death each time it ran out of water and the sensors gradually decided to turn the pump off.

I had worked pretty hard all weekend prepping, spent a day on edge waiting to launch, and then spent the night trying to sleep on a sinking boat to the coughs, sputters, and whining of the bilge pump.

In the morning, I talked to the office and one of Sam’s guys hauled Ruth Ann back out of 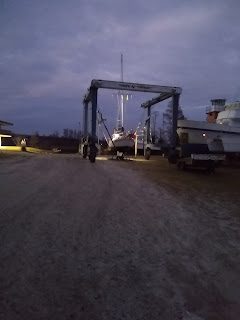 the water by 9:30 or 10:00 Tuesday. When I left the dock to go back to the slipway and the travelift, there was a lot more curent that it appeared and Ruth Ann got pushed into some trees that had floated down the river and caught on the upriver end of the dock.  For a moment the current was pressing us into the tree and I wasn’t sure that I could get free (This foreshadows Part Two of The Tale of Two Screw Ups). Eventually I got her moving and I was kind of proud of how I entered the slipway; well centered and drifting to a stop right in place. No rest for the weary - now I had to find the leak and repair it.

I learned something interesting about my boat that day. The hole was a perfectly round drilled hole, probably drilled by me, but I don’t really know how it occured. The hole itself had been right on top of one of the wood blocks that Ruth Ann sat on. That block prevented any daylight from shining through to catch my attention and it was tight enough to hold water in the bilge; faking me out from another perspective.

I got some tools, my epoxy, and some glass cloth out of my recently moved tool trailer. After grinding around the hole and beveling it slightly, I applied four layers of glass cloth to the botton of the keel with the epoxy. Then I made some putty by mixing cabosil (chopped glass fiber) into some epoxy. After the first patch had cured, I pressed the putty into the hole from inside the bilge. Ruth Ann was already scheduled to go back in the water the next morning. I let the epoxy cure all night, then I scrounged up a quarter cup of bottom paint, sanded the patch, and painted it. 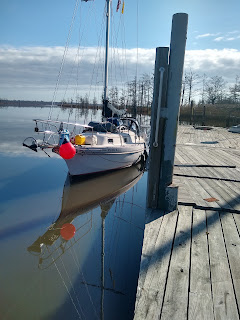 The next morning (Wednesday), I was back in the water and back at the dock. My friend, Anthony, ran me into town to get some final provisions and took me to lunch - my last meal on land for a while. Back at the boatyard, I put away my groceries and decided that I would leave with the falling tide in the morning.

Stay tuned for Part Two, perhaps the most embarassing and depressing day of my sailing life.