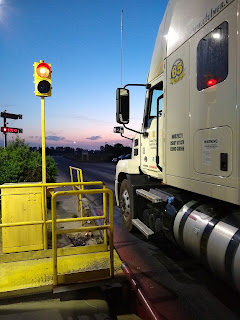 We are back to “If it was easy, everyone would be doing it.” The Universe has been testing me, but I am unassailable.

It’s been a frustrating week, but it all started fine. “Started” is a funny word, because for the last eight months or so, my week has been six days on, one day off with my “weekend” usually falling on Tuesday. Anyway, on Monday, which is kind of my Friday, I turned in my two week notice. I will soon be done with truckdriving and will be back at the boat by the first week of September.

I normally would have rolled back into the terminal during the day Monday, had Tuesday off to reset my DOT clocks and run some errands. There is a lot on my mind as I crash toward the end of this round of truckdriving. Apparently, I had failed to email my dispatcher with my requested hometime. This formality has been a little bit more formal with my current dispatcher. Also, I had a slim week because I had spent most of the day Saturday in a truckstop shop getting my trailer fixed. This meant I hadn’t used up all my hours for the week.

So I got another load rather than being dismissed for the week. Trucking is an unpredictable occupation and I have learned to just roll with it. I had my doubts from the start about this new plan and as expected it got sideways. I picked up a load of cardboard bales and headed toward Georgia again. The unloading at the papermill went faster than expected, and I headed on to Savannah to grab the Walmart load that was going to get me back to Florida.

Along the way back, I was watching my clock and how many miles I had yet to go. By the time I got near Gainesville, I knew I wasn’t going to make it to the delivery and then ‘home.’ I called in, but my dispatcher was at lunch. The load could have dropped at the terminal for someone else to deliver the next day, but the guy I talked to said it was set up for me to take it all the way and offered no options. I didn’t argue.

What I did do was pull off at Hawthorne, FL - a little early - where I knew I could take a short hike and get some Chinese food. If I was going to take the load all the way, it didn’t matter how far I drove that day. I’d get there at the same time tomorrow one way or the other after taking the required ten hour break. What that meant, however, was that I was going to roll in on Wednesday and have Thursday off; shifting my schedule by two days.

When I woke on Thursday, I had a lot on my mind. I already have one foot in Navassa, NC next to sv Ruth Ann, my boat. I took off, dropped the load in Brooksville, and headed to the yard in Groveland (“home”). What I should have done somewhere along the way was get some damn fuel!  When I turned the corner in downtown Groveland, the fuel all sloshed to one side of my nearly empty tanks and I got a short buzz to tell me that I was low on fuel. Dang.

At the yard, I dropped my empty trailer and called my dispatcher. Pete has been very good to me but I was causing us both a problem. He did not have any advice about fueling up as there are no truckstops nearby, but he had me check with the shop. The mechanics could appreciate the silliness I had got myself into, but could not help.

I’ve been living out of my truck since late December. My whole living space is about two thirds the size of a full size van. I have standing headroom, and the cab is about as wide as a big van, but behind the driver’s seat is a small cabinet and then the bunk. With all the fancy new auxiliary air conditioning for when the truck is stopped, there is nearly no storage under the bunk. I throw my duffel bag on the seat to make room to sleep in the bunk and throw it back on the bunk when I wake in order to drive. And … there’s a ukulele, a laptop, dirty clothes bag, and other supplies that make those hops back and forth too. Under the mattress, are three boxes I bought from the UPS Store so that I could ship some of my cold weather clothes back to North Carolina. I needed longer sleeves until about March, but haven’t worn them since. Hauling less through the Greyhound station in a couple weeks will be nice, but that stuff is not getting shipped this weekend.

I couldn’t rely on what little fuel I had to run the auxiliary a/c for 34 hours on my weekend. I also needed that puddle of fuel to make it to a truckstop to get more. The shop thought that I had about enough fuel to get to the nearest truckstop. The other pressing issue was that I had about 55 minutes left of the 70 hours I’m allowed to drive in a week. The truck can’t move without the computer knowing it and there is no wiggle room for goofy personal problems. After evaluating my options, I made a snap decision. Back in the empty lot, the only trailer available was the one I had just dropped. Empty trailers are often worth their carrying capacity in gold. I always need one to move about, empty or not.

The guard at the gate eyed me curiously as I dragged the same trailer out that I had just brought in. “It’s a long story,” I said as she checked my lights and my permits. Pausing in the driveway, I quickly typed a message to Pete. I was headed to the Pilot Truckstop in Wildwood to get some fuel and spend my 34 hour weekend. It was a slightly dumpy, older Pilot, but it was home … until late Thursday. However, there was no laundry and not a grocery store in sight. I’ll make up for missing my weekend errands on the road after I get moving again.

All this goofy drama trying to get to my weekend is not unlike my life trying to get to sea.I have been frustrated. I’ve been blocked and bamboozled, but I’ve kept going. I’ve rolled with it for fifteen years and four boats. Things have not gone the way I thought they would; the way I had hoped. It’s been harder, more expensive, and sillier than I could have ever imagined. But I’m still here – still doing it. I will not be turned away! I am already detached from the expectations and the faux authority of normal life on land. For fifteen years, I have been living on my own terms. It has not always been what I wanted it to be, but it has always been headed toward my goal: living aboard and wandering around the Caribbean Basin by sail.

I have no fear of life or death. I have done my best and I am satisfied. If all goes according to plan, I will be sailing before Halloween.