I don’t have many superstitions on land, but I have a few around the sea. Occasionally, I make fun of old sailors’ superstitions by participating in them. Other times, it feels more serious than I’d like to admit. I may have told a version of this first story back in 2014, but it’s a good segue into a tale about last weekend.

In 2013, I had been working on my first boat for about six years and I was really burnt out. Late in the year, I had a heart-opening conversation with a good friend. She gave me the vocabulary that I needed to give myself permission to move on; to give up the boat project I had started with. The traumatic process of letting that first boat go is described in this post.

Of course, a sailor is always looking at boats; especially a boatless sailor. Way sooner than I had expected or planned, I found a great boat at a good price. That boat was Bella, an Albin Vega. The story of buying Bella is here. I had found her on Craigslist, went and looked at her in a freezing cold Wisconsin barn in December, and worked out a deal to buy her with a little help from a wonderful friend. When the snow and ice finally melted, I was able to get some time off work to go back to Wisconsin and bring her home. That finally brings us to the superstitions. I had owned the boat starting in mid-winter. The Winter Storage bill had been paid, so all I had to do was wait until it was warm enough to go see her again. During that time, I started obsessing about her name. Bella was nice, but it didn’t connect with me at first. I started making lists -- and lists -- of potential names. I’m mostly Irish so I looked up salty names and phrases in Gaelic. I considered Spanish and Portuguese names for some reason. Of course there were options in English, but also in Ojibwe. I fretted and deliberated on many, many potential names. It became a problem; an addiction. While I waited to go get my boat, I had nothing more to do than to grind and grind my brain about her name.

It felt especially important for me to decide on the name before I went back to retrieve her. I was never sure how superstitious I actually was (still not sure), but I knew that I would have been pushing my luck if I had sailed her across the Lake as "Bella" and then changed her name. It needed to be settled before I launched her again. That was my rationale in deference to Posiedon, Ruler of the Seas.

In the end, I gave up. I had wound myself so tightly about her name that I eventually snapped. I decided to just keep the name. It was a good name; “beauty” in Italian. It also fell in line with my two rules about boat names. First, a boat name should be easy to say and to understand over the radio. And second, the story behind the name can’t be too cute or too convoluted. You will likely be asked many times, “so how did you come to name her that?” The story has to be one that you can stand to tell perhaps several times a day whenever you are with the boat. In keeping the original name my story was abbreviated to simply “that was her name when I bought her.”

When May came around and the snow was gone, I got back to Wisconsin, back to the storage barn, crawled inside to survey my little ship … and nearly fell over at what I found. I had not noticed back on that chilly day in December, but above the door into the forward area of the boat was a small plaque. It was a thin rectangle of metal, laser-cut with the name “Bella” in script. If I had changed her name and attempted to remove that little plaque -- for certain there would have been two screw holes left in the wood, but also, and most likely, the shadow of “Bella” would have been a permanent mark in the finish. Surely the varnish on the door frame had faded over time, but the rectangle and “Bella” was protecting the finish underneath. Superstitious or not, to some degree or more, I would have been completely shaken by the bad precedent of the old name remaining aboard. Further, I didn’t have time to sand and refinish the frame before leaving. 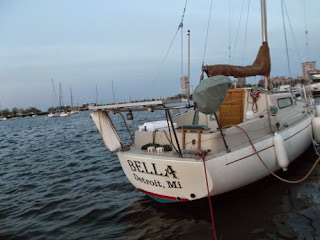 If you’d like to read the story of meeting Bella again, prepping her, and crossing Lake Michigan without an engine, that story starts here. Click on “Newer Post” at the bottom of each page to get the whole story.

I was happy to have kept the name “Bella” and perhaps to have kept myself and my little ship in the good graces of Poseidon, Davy Jones, and Old Hob. [ certainly not the words of a skeptic ]

That brings me to this last weekend.

I had ordered vinyl graphics for sv Ruth Ann; her name and hailing port. And after hanging them in different spots and deciding on the best location, I cleaned the hull and applied them. Ruth Ann is a U.S. Coast Guard Documented Vessel, so her name must be in letters four inches tall. I think that that is supposed to apply to the hailing port as well but I had some spacing problems. “Ruth Ann,” just seven letters and a space, is too wide for my transom at four inches tall. I have a windvane mounted at the center and a swim ladder to port, so I only have the transom’s starboard half for her name and hailing port. What I decided to do was put “Ruth Ann” on each forward quarter in 4” high letters, but put “Ruth Ann, Detroit, Mi” in two lines on the transom in letters sized to fit. I think I will be all right. 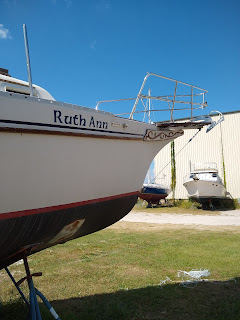 After I had emblazoned her name on the topsides, I confirmed that there was no evidence of the old name aboard. Then last Friday night, I caught Mike, one of my boatyard friends, and we walked out to the dock on the river. I had a slip of paper with the old name written on it and a pint of Wild Turkey. Bourbon has become my traditional boat christening liquid and Wild Turkey has been my bourbon for a long while. I’m not really a champagne kind of guy and the boats I’ve owned are not champagne boats either. I poured a shot for Mike and one for Poseidon (I only had two shot glasses). I raised a glass and said:

“Poseidon, Ruler of the Seas, I beseech thee. My little boat has had many names; the last being neither proper nor fitting for a sailing ship such as her. Please strike that name from your ledger as I will be christening her in honor of my mother and grandmother in the coming weeks. Please keep an eye on my boat and I as we travel your waters.” 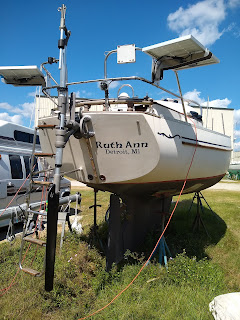 And with that, I heartily pitched a shot of Wild Turkey 101 into the Cape Fear River. And then I slipped the paper and the old name into the water to dissolve in the river on its way to the sea. Finally, I poured a shot for myself and another for Mike. We may have had a few more right there on that peaceful night.

The water here is brackish, a mix of freshwater and salt, and very much connected to the sea. The Atlantic’s tidal currents come all the way here; 35 miles or so upstream. The river actually flows backward at the peak of the flooding tide and races a little faster when the tide is in full ebb. The river will carry the drink and the stricken name straight to Poseidon himself.

It’s no secret that the boat’s most recent name was “Afraid Knot;” a name altogether too cute and too corny for a proper sailboat. Such a name is befitting only of a lowly, prosaic powerboat. I’ll have no reason to speak of such a name any longer.

So … was I playing with an old sailor’s superstition? making fun? or was I taking it all very seriously? I don't know what to tell you, but I do know that the first time through, I had forgotten the piece of paper and had go get it in order to do it all over again to make sure that all was right with Poseidon. Sounds pretty superstitious to me.