More Boatwork, Less Time, with less and less To Do 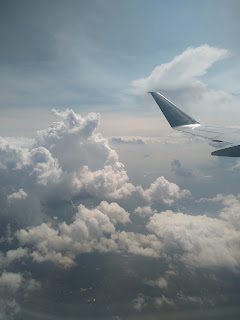 In the month of July, my boatwork schedule changed a bit because of the side gig. The job is going well. The people are good folks and the work is endlessly interesting; nearly to a fault. At times, it’s like shooting fish in a barrel as none of them have the time or the patience to do what I’m doing for them. When I first arrived, I was worried how much work there actually was, but the longer I’m there the more I worry they’re going to want me longer than I’d like to be there. That’s not such a bad position to be in.

In the meantime, some evenings but mostly on weekends, the boatwork continues. The bowsprit has been re-installed on the bow. I had some chainplates made and installed them. I was chasing a leak near the bow for what seemed like most of the month. It turned out that it wasn’t any of the numerous bolts in the hull and deck joint, but a little screw in a zip tie holding a wire. At first I thought that the screw had somehow pierced through to the deck, but I believe it was more complicated than that. I was caulking everything I could think that might be leaking and happened to bump the starboard bow chock. The chock was a little loose with rotten wood underneath. This is probably where the leak began. My current theory is that the water entered by the loose bolts of the chock, and was running down the hull and deck joint to the little screw. The screw was into the joint, but was not long enough to reach the deck. It was also just loose enough to let the water drain. This screw happened to be inside the cupboard behind my composting head. The drips fell onto a wooden shelf in the cupboard which now needs to be replaced. Somehow the water was also draining further and collecting just behind the bulkhead that separates the head from the forward storage locker. Some of that plywood wall is going to need fixing too. 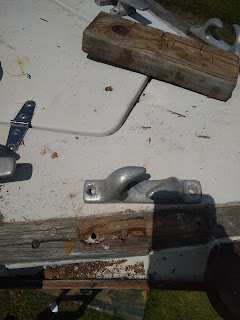 The most challenging work was getting the cap shrouds on the mast. My mast is an Isomat mast from France and was probably the state of the art in the mid-eighties. The mast has nine stays; two lower shrouds each side, two cap shrouds, a forestay, a backstay and a staysail stay all connected at the top with stemballs; a lollipop-looking termination. Looking up at the mast from the ground, I was fairly sure I had found a fitting to connect the tops of the lower shrouds but I wasn’t sure it would work for the rest. I ordered just four of those fittings, and used them to test eight of the connections. The staysail stay has a different connection.

Those stemball fittings were not going to work for the cap shrouds. The shrouds connect the top of the mast to the sides of the hull. They actually enter the mast twenty or thirty inches below the top, cross internally, and connect to the masthead from below, inside. The masthead is welded onto the top of the mast. This left me only a small slot to work with; about an inch and a half wide and six or seven inches long. The shrouds would terminate with a spliced eye around a part that I had purchased from Colligo. Those parts, however, would not fit through the side of the mast. I had to run the dyneema rope through the side of the mast, up and out the top of the masthead. An eye was made in each shroud to capture the Colligo parts which were designed to accept a dyneema loop or eye on one end with a fork on the other end. The forks would each capture the end of a standard stemball and attach with a clevis pin. 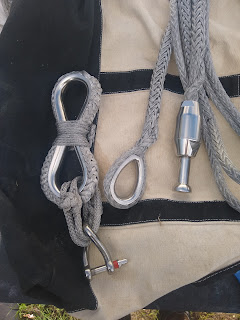 I had practiced assembling all these parts in my head for days. It actually went exactly how I had imagined which never happens with boatwork but I’m getting ahead of the story.

With the stemballs inside the masthead, just beyond my fingertips, the finished shroud end assemblies had to be pushed back into the mast and aligned with the hole in the stemball. All taking place beyond my reach and nearly out of sight. This took a few tries and plenty of cussing, but mostly patience upon patience. More than once I stepped away and walked around for a minute to clear my head. With a menagerie of tools and some heavy gauge copper wire to fish with, I managed to wiggle the stemball into the fork inside the mast. Once aligned, the clevis pin was carefully lead into the mast gripped by a pair of channel lock pliers. The pin entered the fork easily, but wouldn’t go through the not-yet-perfectly-aligned stemball. Another gentle wiggle and -- click -- the pin fell into place. I had done it! 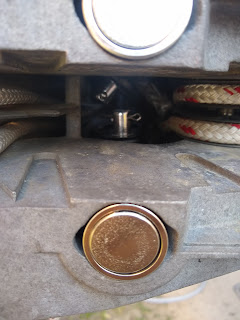 Nevertheless, that wasn’t the last step. I still needed to get a cotter pin into the clevis to make the connection permanent. I carefully rotated the parts by turning the stemball from the top and twisting the rope from below. Once I could see the hole, the cotter was placed with the same long pliers. Then with a collection of picks, pliers, and more screwdrivers, I carefully turned the clevis pin around so I could spread the cotter ends.

The second one was only slightly easier.

Two more of the original style stemballs are on backorder. The T connection for the staysail stay is on the same order and will all ship soon. I have already built the lower shrouds, but they are not yet connected to the mast as there isn’t a good way to keep them up off the ground in the interim. Once I have the backordered parts, I can install the rest of my standing rigging. Then the mast can go back up. The lower connection points of the shrouds will be built in place once the shrouds are hanging from the vertical mast. 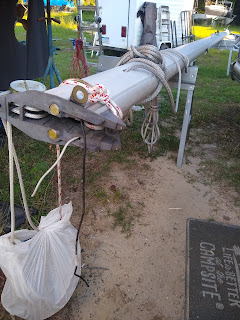 With the leak chased, the chainplates in, and the cap shrouds handled, I could return to the bowsprit. It is back on the bow and the joint between it and the hull is caulked. In the last week, I’ve been working on getting the bow pulpit bases back in place and ready for the pulpit’s return. My list is still occasionally daunting, but it gets shorter and shorter all the time!

And then I flew back to Michigan.

It's been a couple years. One of the motivations for visiting Michigan was to see Dad, the rest of the family, and a few friends before the boat is back in the water. With my commitments at the side gig and the boatwork I have left to do, sv Ruth Ann will be launched in September or October. If you'd like be one of the first to know, one of the first to celebrate with me, consider becoming a Patron at the link to Patreon above. Even a buck or two a month makes a huge difference. Patrons get a copy of each blog the week before it is published publicly, along with other perks. There will be a Live Patron Event online either during the launch, just after, or perhaps both. Thanks for everyone's support. 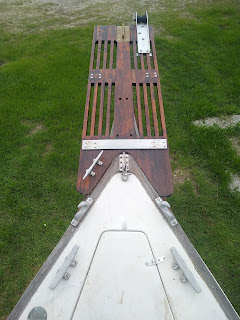