Sneaking Up To North Carolina 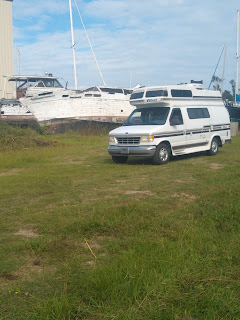 This is Part One of a 3 Part Series.

I wasn’t going to post much to this blog, because I am not in Navassa working on the boat. I am waiting for all this craziness to end and the world to loosen back up. So I’m back on the road driving for a company that I’ve driven for before; hiding out from COVID and making a little money. Nevertheless, I was able to talk my way into a four day weekend and snuck up to North Carolina to check on my boat, sv Ruth Ann. I drove up in my campervan, known as The Moose.

I’ve been suffering from a boat-related version of hypochondria. A few times a week my brain would wander off and suddenly I could imagine all the ways that Ruth Ann was suffering some damage up in the boatyard. I imagined her full of water, invaded by bees and wasps ... or mice and snakes. I pictured her leaning on her jackstands damaging the hull. Or she had fallen over sideways. It was mostly ridiculous, but after three months away, it was time to go check on her.

I got back to the terminal near Leesburg, FL early on the last day of my week. It was easy to get organized, pack up, and head north by midday the day before I’d anticipated leaving. It had already been a full day starting in the wee hours, but I was motivated to see my boat. That evening, I made it as far as exit 49 in Georgia, near Darien. The Taco Bell there was still open, I grabbed a black bean something or other and parked the van among the big trucks out behind the BP station. I’d slept there before in my semi.

The next morning, I was up early and ready to roll, but the Burger King was not yet open and the Parker’s gas station had no Parker’s Kitchen -- no quick breakfast to grab. So I crossed the highway and stumbled into the Waffle House. I ordered the two egg breakfast and a subscription to coffee. My hash browns are always “scattered, smothered, diced, and peppered;” scattered on the grill, smothered with grilled onions, diced grilled tomatoes, and jalapenos. I sat at the counter next to a chair covered in caution tape to promote social distancing. A scrawny dude with stringy hair sticking out the back of his Waffle House hat took my order. He looked a little out of place so early in the morning. Tattooed on his left hand knuckles was the word “King.”

He complimented me on my octopus tattoo and asked to see the treasure map tat that was peeking out from under the sleeve of my t shirt. He took more than a casual interest in the quality of my friend Emily’s work. I asked if “King” was a nickname. He said it was and told me he had just finished his tattoo apprenticeship when COVID hit and everything shut down. That explained his inexplicable occupation in the wee hours of a Tuesday morning. Then he showed me a Viking motif tattoo that he had done - his first tattoo as an artist. It was an impressive big black and grey tat, well done. He was experienced enough a server that he left me to my eggs after delivering my breakfast, but he cashed me out too fast and didn’t give me a chance to tip on my card. The other Waffle House employees that morning had the patina on them of years behind the counter, I know the tattoo dude will soon learn the ropes.

I carried on that next day, my first official day of a four day weekend, and made it to the boatyard. No one was in the office when I arrived, but there was a little pile of mail for me. When I emerged from the john across the driveway, I ran right into Sam and Amy; the yard owner and the yard manager. We had a pleasant chat and I followed Amy into the office to pay my October rent. After some more chatting, I proclaimed that I hadn’t even seen my boat yet and left them. With a little trepidation, I drove through the yard. I wasn’t sure exactly where they had put Ruth Ann. The yard boys had moved Ruth Ann the day after I had left back in June, in order to get the boat behind her into the water. When I found her, she was standing out in the field, lonely, a little dirty, with the grass growing tall up around the feet of the jackstands. My ladder was locked on my little tool trailer. I grabbed it and climbed up into Ruth Ann’s cockpit. A sun baked, windblown tarp still covered the companionway; one of my worries.

The companionway has two small drop boards and a large louvered vent topboard. The vents are screened and the louvers will keep most rain out of the boat, but in a storm with near horizontal rain the louvers aren’t much protection. There’d been a couple good storms this summer and I’d imagined her filling with water through the companionway. I remembered debating whether to tarp the companionway or not. Ventilation is a good thing. Time away left me unable to recall my decision. Luckily, I had tarped. So, I untied the lines, folded the tarp, and removed the dropboards.

Down below, I stood in the galley and absorbed the state of things. There were no obvious signs of moisture or leaks, no smell of mildew or sour standing water. I hadn’t finished the wiring when I left, so it still looked like an old house being remodeled. There were spare parts and components lying about, wires hanging from cupboards with switches and fixtures next to them awaiting installation. I had put all the tools away, but it was a little messy.

The boom was off the mast and down below which had to be moved so I could get to the floorboards. Another swell of drama rolled on me as I lifted the hatch to look in the bilges. The summer before, when Dad and I travelled to North Carolina from Michigan after Hurricane Dorian, I had pumped about thirty gallons of water out of the bilges. One of my hypochodrial worries was another full bilge. I had worked pretty hard to trace and fix leaks while I was with Ruth Ann earlier this year. That work paid off when I slowly lifted the hatch and saw about a half cup of water below. The Bayfield 29 has a keel stepped mast so there will always be some drips of water that make it down the mast and into the bilge. That’s just part of the game. A half cup, I can live with.

I talked with some of my boatyard neighbors. Most of them, I had wished for their own sakes, that they had gotten boats back in the water and left, but here they still were. Some trapped by a decent job nearby, some confronted endless projects with limited funds, others just kind of got stuck, but it was good to see them all, regardless. Boat people are my people; even boat people on land. 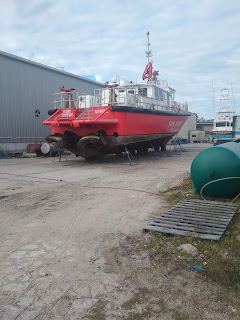 I spent the night with the Moose almost under an Army fire rescue boat in the yard for annual maintenance. In the morning, I retarped the companionway and put away my ladder. Inside the tool trailer, I was glad to find very little mildew or corrosion. Before locking the trailer back up, I laid a bag of kitty litter in the back and sliced open the top to absorb moisture. With that, I was done with my check up. I had taken a couple extra days in case I needed to take care of some emergency, but it hadn’t been necessary. I was craving some seafood, but I didn’t have anything left to do in Navassa. I decided I would leave early and avoid the highway back to Florida. My current job has me practically living on I-95; why would I want to take I-95 all the way home? I said my goodbyes and headed south down US 17.