An unusual thing happened that made me notice something else had settled. It was apparent that I was just perceiving what had already baked in; was already done.

Hanging around a boatyard is being with my tribe. We have disparate opinions about politics, power vs. sail, and all sorts of things, but we can talk about boats for days. I was describing to my neighbor a trip I had taken down the U.S. East Coast, crewing on Eleanor, a Westsail 42. [The telling of that whole story starts here.] I had said that if money was no object and I could have any boat, I would likely choose a Westsail just like Eleanor; even though they haven’t been produced since the late 1980s.

This neighbor occasionally tries to convince his wife that they should have a sailboat rather than their curiously beautiful British workboat turned cruiser. Just then, he remembered having looked at a boat nearby that was like the one I described. He thought it could be had for cheap. 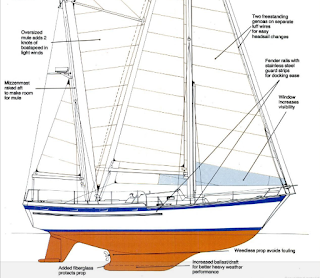 It turned out that he had seen a Tartan not a Westsail, but another beautiful, solidly-built boat about forty two feet long. It was a ketch just like Eleanor and had been featured in a magazine at one time. Apparently, it had been partially sunk but rescued by a skilled salvage crew. She had been saved, preserved, and now spends her days motoring a bit around Georgetown, SC. The story was, the salvager didn’t really know what to do with her and was getting bored. She might be headed to the scrapyard. Or … an ambitious sailor might be able to have her for the scrap value of the lead in her keel.

I saw pictures, recent ones. I received the phone number. I read the article.

She is still beautiful; even after some trauma and benign neglect.

Not so long ago, a previous version of me would have spent the next few days sifting through the details, doing the math, and daydreaming big plans. I often did this without any real thought of trying to purchase some prospective boat. But other times I would sink into detailed planning, get emotionally involved, even discuss options with an owner, and end up heartbroken when I couldn’t pull it off.

I haven’t seen this boat in person and there are several red flags about her. Set aside that the used sailboat market is not so soft that someone else would not have grabbed a feasible project by now. I don’t know the story or the extent of the sinking. The sails are supposedly shot, but there might be another set. And a bigger boat is always more expensive; to maintain, to dock, to run. None of this, however, would have slowed me down before. Hell, I bought a boat in Miami that had no engine, from Michigan sight unseen, and subsequently sailed her over a hundred miles in the Atlantic to get her to a yard where I could work on her.

I was never really turned on for some reason, but the magazine article was chock full of other details that were not positive. The article was titled “The Geriatric Ketch” and was all about how the previous owners, an older couple, had set the boat up to assist them in continuing to sail in their autumn years. The boat bristled with gadgets and labor saving devices, like electric winches. There were modifications to the keel. Every sail was on a furler. I don’t even like furlers, but that might not have stopped the previous me. That me would have likely been obsessed with the idea that a beautiful, fixable forty two foot ketch could be had for round about $9000.00. It seemed strange, but even after all that neighborly boat talk, I was unfazed. I couldn't have cared less. 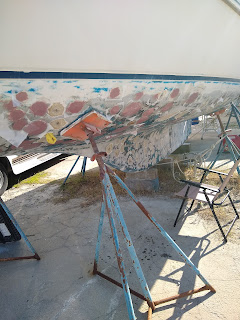 I had read the article on my phone from a lawn chair in the shadow of the boat that sits right behind my Ruth Ann. I’d been sanding all morning when I struck up a conversation with the neighbor. I set the phone down just as the sun climbed over the building behind us; splashing afternoon sun all over my boat. I’m working hard to bring her back to her glory and that work stood out in the bright contrasts. The port side of the hull was mostly smooth again. She was generally clean and finally looked like someone was taking care of her. No streaks of dirt from the rain. No moss in the shadows. No sun-eaten ropes hanging around. Halyards were coiled and stowed. They only bang the mast in the strongest wind. Her transom is clean waiting for a proper name and hail. The teak that I had stripped, sanded and oiled glistened darkly, relishing its renewal.

She had overheard our conversation about the other boat. Her trailboards quivered and her shoulders sagged against the jackstands that held her upright. I could sense that I had confused her. We have made so many promises to each other. But I felt nothing about that other boat. There was no swell of curiosity. I couldn’t even bring myself to play with the details just for the sake of playing. I didn’t look up her displacement, what kind of keel she had, or the price of scrap lead. 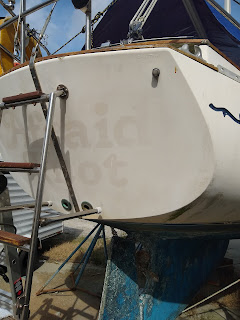 All I could do for Ruth Ann was get back to work. I picked up the sander, grabbed a fresh sanding disc and snapped on my ear muffs. She’ll know soon enough.

Ruth Ann is a bit small; storage is going to be a concern, but she’s mine. She is a great boat for places like the Bahamas, Chesapeake Bay, and Pamlico Sound. She can probably cross an ocean too, and she and I are going to work on that for the future. I know just what she needs and there isn’t that much. Ruth Ann and I are very close to setting off. There’s just no sense in starting over on another project; no matter how luxurious the possibilities are. And besides I can feel that I am committed. I wasn’t sure of that until now, but this is it. She and I are the plan.

This might not sound like much of a revelation, especially to a landlubber, but it feels significant to me. The analogies to falling in love are obvious but too cute. I’ve been committed to this lifestyle but have never been committed to a particular boat [‘obviously’ some of you groan]. Surely part of it is that I’ve never been as close as I am today to actually being able to push off and start to wander. 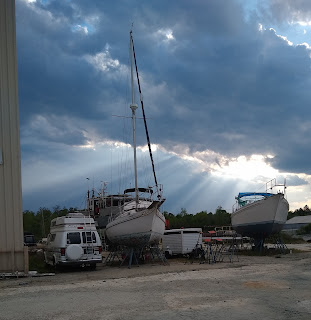 In thirteen years, I’ve never been this close to my dream. I can feel it! For the resources I have and the plans I’ve made, Ruth Ann is just about perfect. We can work together to handle whatever isn’t. Depending on how the world turns out in the near future, Ruth Ann and I will be cruising the U.S. East Coast this summer. And if this pandemic situation relaxes enough, we’ll be in the Bahamas for sure next fall and winter. Puerto Rico, the Virgin Islands, Haiti, Jamaica, even Colombia and Panama are all also within the realm of possibility. Stay tuned.

I’ll be ordering barrier coat and bottom paint by next week. The work continues.
at April 27, 2020