When we last left our hero he had blasted out of Florida bound for North Carolina fueled by high octane inspiration having spent a week on the water aboard Wade’s boat.


After riding with Wade back up to St. Augustine, from Stuart, I reset the camper van for travel and headed north. I stopped in Brunswick, GA at a Flying J Truckstop where I’ve slept many times; only this time not in the sleeper of a semi-tractor. From there, I pushed on to Navassa, NC and was finally back to the boatyard, back to my boat, sv Ruth Ann. The first priority was to sort through my stuff; what I had in the camper van and what was in the trailer next to the boat. A few tools I knew I was going to need were buried in the nose of the trailer. While I had been hiding from Winter in Florida, I had developed a preliminary project list based on my memory. Now that I was finally back, I needed to crawl around the boat, get my bearings, and compile an up-to-date list of jobs.

Also, the weather has occasionally reminded me that I arrived here a little early. Sometimes it is still downright cold! I've decided that I will persevere, do what I can when I can. I have, however, found a hostel over in Wilimington; an inexpensive spot where I can escape when it gets really damn cold. I'm actually here in the hostel the third weekend of February, 2020. There was a little snow in the air during the wee hours this morning and tonight it's going to be about 26 degrees!!!

Depressingly, back at the botyard, the bilge was full of rain water again, but I dug around and tracked down the source of the leaks. The big leaks were stopped but a couple stubborn small ones need more attention. The two biggest jobs I have are painting the bottom and re-rigging the mast. Of course, those major projects will each be accompanied by smaller related projects. There surely will be lots of other little projects that come up but I’m going to stay focused. Sailors can easily get bogged down in a boatyard as more and more little projects are discovered and beg to be started. All my jobs are prioritized by category: jobs that have to be done on the hard; jobs that would be easier to do on the hard; and jobs that can be done on the water. The boatyard that I found is a great spot; inexpensive with good people. But as soon I can get Ruth Ann back in the water, I can stop paying $300 a month for the space in the gravel where she sits.

Painting the bottom obviously has to be done while the boat is out of the water. The thruhulls were in bad shape and needed to be replaced before the bottom gets painted, so I’ve started there. Production boat companies, even the good ones, have always had the bad habit of cutting corners regarding so-called “skin fittings.” These are the valves that let water in or out of the boat through the “skin” of the hull. This is, of course, right where you would not want a leak. You would think that good hardware done well would be the norm. Alas, boat builders of “classic plastic” boats used a ball valve screwed on top of a threaded thruhull. This practice was not just lacking in structural integrity, the threads on the two parts are actually mismatched and cannot seal perfectly. Skin fittings done this way, especially done decades ago, are a weak link.

My 36 year old “weak” skin fittings had, of course, corroded themselves together. Some of the valve handles had been carbon steel and were so thoroughly rusted they might as well have been made from saltine crackers. I tried coaxing, cussing, and cajoling the thruhulls. I tried debonding solvents and pipe wrenches with breaker bars. No joy. Obviously, drastic measures were necessary ... I decided to cut them out.


The bottoms of the five thruhulls were at the skin of the hull and could be seen from the outside. Inside the boat, however, the tops were under sinks, inside cabinets, and by the engine. Getting at them was one thing, finding a tool to cut them was another. I ended up using my cordless multi-tool oscillating cutter. It was reasonably compact and the blade could be set at different angles. Nevertheless, it is a finesse tool. Brute force was not possible; attempting to force it was actually counterproductive. Working the blade back and forth, one side of the pipe, then the other, and restarting after it bounced out, I gradually cut through the bronze pipe of each of the thruhulls. That detached the ball valves from the pipes, but each pipe was held inside the hull by a large bronze nut. These too were corroded in place. I had to cut each nut into thirds and pry each of the pieces sideways off the threaded pipe; each of five pipes. Once those mechanical attachments were clear it was simply a matter of hammering the rest of the pipe out of the hull -- until the last one.

The last thruhull would not come out. I went back to  coaxing, cussing, and cajoling; especially cussing. I hit it with ever larger swings using ever larger hammers; hitting harder than I really ever wanted to hit on my hull. No luck. Finally, with a little help from the debonding solvent, I was able to slowly unscrew the thruhull from it's bullet-proof adhesive with brute force and a 1.5” wide quarter inch steel bar turned by a pipe wrench. Apparently, this forward thruhull had been repaired at some point because it was stuck with much better stuff than the rest.

While I was having all that fun with bronze fittings, whenever it was raining or too cold, I was inside the cozy camper van working on the dyneema deadeyes that will help hold up the mast. Also this week, I did some cleaning; I sealed some leaks. Boat parts were ordered; projects were recorded and prioritized. I got some keen advice from my boatyard neighbors about cleaning my oxidized fiberglass hull. I also finally removed the “Afraid Knot” name from the transom and began removing the boot stripes.

I now have real seacocks to replace the ball valves, along with backing pads, thruhulls, epoxy, and adhesive caulk. Hopefully by the end of next week, my hull will be watertight again. To make the deck completely watertight, I need to rebed a couple stanchion bases and the deck hatch. I also need to take a closer look at a portlight; either the gasket leaks or I may need to rebed it as well.

Once the seacocks are installed, I can paint the bottom. I’m going to raise the waterline an inch and a half or so, then apply a barrier coat before the bottom paint goes on. I’ve already talked with the boatyard about getting my mast down for the next big job. The mast has to come down for re-rigging and rewiring, but that will be a couple weeks and another post.

I’ve learned not to discuss dates, but I am super excited how fast Ruth Ann is coming together. 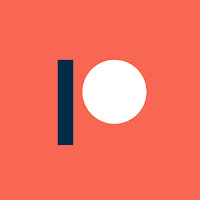 Also, I wanted to tell you that I am working on setting up a Patreon account. Patreon is a website that helps people support their favorite creatives; writers, artists, musicians, etc. I am not working right now; just working on my boat, Ruth Ann. Patreon is a nice, easy platform, but I am trying to set everything up in an organized, detailed, and thoughtful way. My plan is to continue writing in my old school, long form way, but on a more regular basis. For some time, I’ve also been working on a sailing memoir type of book; from my first experiences on a little Sunfish sailing at scout camp, to being on the cusp of an extended cruise on the U. S. East Coast, in the Bahamas, the Caribbean, and Central America. To promote the book and this site, I am developing a podcast that will be supplemented with occasional video updates on YouTube. Imagine the Bubba thePirate Blog with Bubba the Pirate Radio and Bubba the Pirate Radio on TV. I have no aspirations to make all of that a full-time job – my job is wandering -- but I’m thinking of monthly updates; maybe every couple of weeks. My focus is the writing, so the audio and video updates will not be slick, time-consuming productions; just fun, basic updates about where I’ve been and what I did. The blog posts, the podcast and the YouTube updates will be posted openly online. Any support through Patreon or PayPal will be greatly appreciated but is not required. There will be some small bits of bonus content, like previews of the book or something, for those who decide to support me.