Oriental to Charleston, Part I

Note: This is Part One of Two Parts. Part Two is here.

I was crewing on a delivery of a Westsail 42 down the East Coast when I met Wade. He had crewed on the famous W42, Fiona, and was keen to join us for a time. The boat wasn’t departing for a couple days and he was spending some time in the city, but he stopped by with a Charleston friend at the City Marina to introduce himself. Wade is a very interesting guy. We became fast friends between Charleston and Melbourne, FL, where the trip ended prematurely.

In the time since that voyage, Wade had purchased Aletheia, a 36 foot Allied Princess that was converted to a junk rig and repowered with an electric drive. He had found her in St. Petersburg, FL and subsequently moved her to Oriental, NC. I was busy on the road saving money for my own boat project and could not help during that move. However, as Wade prepared to move Aletheia from Oriental down to Charleston, he asked if I could help. I happened to be changing jobs and it worked out that I could sneak two weeks off between them to join him.  Basically the fourth time I quit a job for a sailboat. Two days after leaving the first job, I was on a Greyhound bus excited to be headed North Carolina to go sailing!

After a day and a half of minor boat projects, prepping and provisioning, all was well, hale and hearty. We departed early on a Wednesday morning, silently pushed by the electric motor out of the marina creek and into the Neuse River. Gosh, it was such a pleasure to be back on the water. My boat and I are stranded on the gravel of a Florida boatyard for several more months. The Neuese is a wide enough river I could get used to the versatile junk rig sails and learn the details of the electric motor, the battery bank and power generation. I had seriously considered an electric motor for my Emma, but had found a great deal on an impressively rebuilt Perkins diesel.

It was a pleasant leg up and across the Neuse to Adams Creek. At the creek, we were greeted by stronger than expected wind and current. The inlets and outlets between the sea, the rivers and the ICW prevented me from ever being able to predict the direction or strength of the tide flow. Suddenly, Aletheia was having trouble holding her own. We were making very little way and I was having trouble tacking her; really feeling out of control. I can’t remember why I was steering just then, but poor Aletheia was going back and forth across the channel in the midst of some powerboat traffic. As I tried to tack I only got blown over the other way. I called from help from Wade! The captain may have noted in the logbook that his crew was having a pucker at the lower end of his alimentary canal.

The junk rig is elegantly simple but just different enough from the fore and aft rigs that I have sailed that it took some time to get used to working those beautiful batwing sails. Aletheia has two masts each with a similarly shaped sail. As different as the sailing was, when trying to tack -- turning into the wind for you land lubbers -- I needed to think of the forward sail like a jib on a sloop anyway. Once Wade had me releasing the sheet of the forward sail as I came about, I could manage a proper tack.

The sailing handling was straightened out but we still could not make any headway against the wind and current; something else was wrong. The Captain decided we should backtrack to an  anchorage he knew. Perhaps in an hour or two we could try again. Soon, however, we realized that we would miss time the tides at Beaufort. The original plan had been to go out into the Atlantic at the Beaufort Inlet and anchor at Cape Lookout, supposedly one of the most beautiful anchorages on the East Coast. From there we could decide to continue offshore or duck back into the ICW, the Intracoastal Waterway. We ended up staying the night at the anchorage at the north end of Adams Creek.

The next morning, we were up with the sun and started down the creek in the stillness of the morning. And … we still couldn’t make much way.  There was no wind and very little current, but we were struggling to creep along. After circling back the the anchorage, we decided the propellor must be fouled. Wade prepped to jump into Adams Creek … in April. I changed into my swim trunks as well, just in case. Luckily for me, after his initial shock, the Captain, a regular resident of Alaska, decided the water wasn’t so bad. He quickly found the prop was, in fact, fouled -- not fish line or rope on the shaft -- but barnacles on the blades. I dug out a putty knife and the Captain had our prop clean after several dives. We raised the anchor a second time and headed south. The clean prop made all the difference! We later learned that the marina we’d left had suffered a barnacle bloom.

That second day, even with a false start, was a good run. It was so easy to motorsail with the junk rig.
The full length battens and the unique parrell rigging kept the sails from flogging. When the sails weren’t much help we simply snugged up the sheets and ignored them. When they could help, the sails were already up and ready for adjustment. With a fore and aft rig like mine, the sails would have gone up, come down, gone up again, come down etc. Chances are, rather than fool with them, my sails would have stayed down and I’d have just motored the whole way without getting the occasional help from the sails.

We motorsailed down to Beaufort and then stayed on the ICW as the forecast and the tides precluded us from going offshore. We were near enough to civilization that we usually had cellular data and could check the marine forecasts and tide info, or download GRIB files. We anchored for the night off the ICW just above Swansboro.

The next morning we were off early and continued down the ICW. After some time, silently, electrically plying the ICW, the channel had turned and we decided to raise the sails to take advantage of our new angle on the wind. Unfortunately, we were approaching the New River Inlet, a confused delta below Camp Lejuene. The occasional roar of military jets added to the milieu as I worked to raise the sails. Just as we were moving into an area of bouys that are regularly moved to mark the shifting sands, Wade was steering as I was hauling lines and halyards. Every time he leaned one way to check the position of the channel, I would move to block his view; oblivious of the scattered bouys he was trying to decipher. Where the main part of the New River crosses the ICW, the channel had not simply shifted -- it had changed dramatically. Suddenly a bouy we needed to keep to our right was well to our left … and we ran aground. 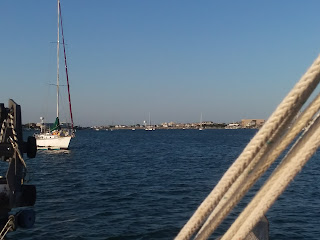 If you go down the ICW without running aground once, you’re lying. We lost about an hour, calling Towboat/US and waiting on their arrival. They were super nice guys and had us off in no time. The tow captain said, “Yep, you’re right in the middle of where the channel used to be.” Even with the grounding, we made a good distance Friday. The last few miles, however, were a mighty slog into the wind and current. We were creepping along only a knot or two over the ground and fought our way into a ‘V’ between two channels to anchor for the night near Sloop Point.

I must say it was a luxury cruise for me. The last delivery I crewed on, I cooked about ⅔ the meals (I was happy to do so, cooking is one of my pleasures). This time, however, Wade cooked and fed me like a king. We had steaks for dinner and with our eggs a couple mornings. There were wonderful lunches - often cold cuts and cheese with whole grain bread. I cooked one meal the whole time -- mostly because I wanted to at least once.

In hindsight, trying to make time on a delivery run on the stretch of ICW between the Figure Eight Bridge and Wrightsville Beach -- on a weekend day -- was a strategic mistake. Not only were we fighting the wind and current, and the limited manueverability of a large sailboat, we also had the weekend crowd and their swarming powerboats. No one aboard those little buzzing boats seemed to know why we were making slow circles in front of a closed bridge. They wouldn’t have undertood that we were not only limited by our height but the channel for our four and half foot keel was a lot narrower than it appeared on the surface.

All the while we were calling Wrightsville marinas wanting to tie up for some fuel and a run to the grocery store. Nobody wanted to accomodate our provisioning on a weekend. And once we got under the Wrightsville Beach Bridge and near those marinas, we didn’t want to try and make our way through the maddening crowds just to get some fuel anyway. We decided to anchor at Wrightsville and go ashore in the dinghy.

Wade made contact with a resort hotel and gained permission to use their dock. For some reason, I was steering again, but I got us off the ICW, down toward the Masonboro Inlet and into the anchorage just fine. As we piled into the dinghy we joked about two big lunks, our trash, and four jerry jugs fitting aboard. Just then we realized that three years before, in an identical dinghy, he and I had rowed ashore at Melbourne, FL for fried chicken.

We made it across the choppy bay and pulled up to the dock at the Blockade Runner Resort. The guy
Wade had talked to was not around, but since we knew a name, everyone was very nice and accomodating. We tied up, grabbed our jugs and trash, and hailed an Uber ride. Jeanette was super nice and turned her Uber off to concentrate on escorting us to the Harris Teeter grocery and then a gas station. She was as patient as a saint as the ethanol-free gas just trickled out of the gas pump.

Once we got back to the resort, we had four full jerry jugs of gasoline and several bags of groceries to fit, with us, in the dinghy. Nevertheless, we made it back out to Aletheia. Even if we hadn’t been famished from all the day’s activities, dinner would have been epic; ribeyes on the grill, baked yams, and a huge salad from our leftover lettuce, fresh veggies and chopped fresh cabbage.

Stay tuned for Part Two. It will be available in a few days right here.

Email ThisBlogThis!Share to TwitterShare to FacebookShare to Pinterest
Labels: Sailing