A lot has been going on in Bubba-delphia since I returned from Florida - good god - in June(!). When I returned, I was nearly broke (on purpose) and jumped back into the working world. I continued blogging for a bit as I tried to catch up and cover the whole trip. My schedule went right back to crazy; driving a truck all night. Also, having been on the ocean for the first time, and able to spend a couple months learning from one of my sailing heroes - my mind was thoroughly bent.

Sailing on the ocean aboard Alex’s Westsail, I fell in love with the seakindliness of a heavy displacement boat. Even though their production stopped in the early 1980’s, Westsails are some of the best built boats out there. Alex and Carla do some chartering and bought a 42 footer. I don't need all that space, but the W32 seemed just right. As soon as I got home, I started chasing W32s like a man possessed. There was one in Alaska that they never sent me the info they promised, one on the West Coast that sold quickly though it had some bizarre modifications, one in Florida that wasn't even put together, and two in rough shape on eBay - one in Maryland and one in Louisiana. Oh, and there was one in Texas rumored to be available but was not. There were nights I hardly slept as my brain tumbled through how I was going to attempt to acquire any one of the boats I’d seen.

After a time, I had given up on finding a W32 I could afford. There were plenty available but they were all well beyond my price range. So, I started falling for other boats. It was like a Junior High Dance, I would get absolutely smitten and possessed by one and turn around to see another equally attractive with many, clearly superior qualities, and then I would see another and then ... I talked to a guy in Virginia, a couple guys in Ontario, a boat broker in Miami and those were just the boats that I was captivated by enough to actually make calls. Many others caught my eye and wrecked my sleep for a couple days. And just when I had convinced myself to just not look until I had enough money ... someone shared an ad on the Westsail Facebook page - an inexpensive W32!!!


But I'm getting ahead of myself. I really meant to finish telling the story of the trip. Though it seems like years ago now, it was this last spring and summer. I left off when Alex and I had got to Norfolk, Virginia. We did some caulking and other boat work after crashing down the Chesapeake, spent some time enjoying the hospitality of a fan of Alex's website, and we picked up Joe, Alex's dad. In fact, we worked so hard there are no pictures in Norfolk, but I was living the life. Next, I’ll try to sketch the rest of the trip and get on to more recent developments.

If you came here from a link, click on 'Newer Post' on the left toward the bottom to see the rest of the story. 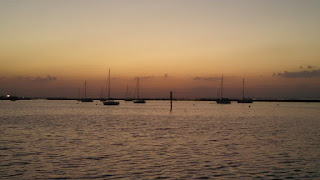