We were stuck for 10 days at Atlantic Highlands, NJ as Sub Tropical Storm Ana decided what she was doing. We didn't have much weather there, but where we were headed lacked any good spot to hide if the storm took aim at us. The last two days at anchor, the wind made it too rough to row ashore in the dinghy.

Once we got underway and out into the Atlantic, Eleanor sailed for the first time in a decade. Boat and crew settled into a rhythm and I took the first watch. The captain went below to rest up for his coming watch. We made our way toward Cape May on a nice beam reach as the wind blew from the coast of New Jersey. Fresh wind was in the forecast so we had raised the mainsail with two reefs and rolled out just a bit of the jib. It was a gloriously contradictory sight, to starboard the beach condos of the Jersey Shore; to port the global expanse of the Atlantic Ocean.

Alex, the captain, took over about 8:00 pm and got a sleigh ride! In the strengthening breeze, Eleanor picked up her skirts to run. She topped 9 knots a few times during the night; under shortened sail. Down below, the roar of the ocean passing the hull was deafening. I knew we were flying but my job was to try and sleep. It would be my turn at the wheel again soon enough.

When the Captain woke me at 2:00 the next morning, to starboard were the beautifully ugly casino lights of Atlantic City. I had just recently been there with Ed and Ben, my cousin Sherry's husband and son. I knew the tired city that hid under the garish lights. "Put your makeup on, fix your hair up pretty, and meet me tonight in Atlantic City."

The casino glare made a grey dome in the sky like a gigantic bandshell obscuring the stars above the city. Further down the coast, the stars began to regain control of the heavens. Untold numbers twinkled in the night sky interrupted only by swaths of the Milky Way and the occasional wispy cloud.

Eventually the moon came up behind me, chased soon after by the sunrise. Slowly the horizon lightened to grey, then yellows and oranges bled in from the other side of the globe. The sun took over and just as the day began, we had arrived at Cape May. Eleanor is a gracefully swift lady and we had made our way faster than we had planned. At the Delaware River, the tide was against us as we had arrived early. Eleanor bucked enthusiastically at the square waves of wind against current, but continuing would have been brutal, if not futile. We decided to stop for a nap and let the tide turn. 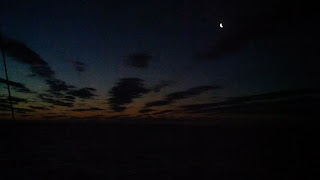 We ducked into Cape May and dropped an anchor just off the Coast Guard Station. Two hours later, we hoisted the anchor with renewed swagger and began the strange but important detour up the Delaware and over to the Chesapeake on the C&D Canal. This route was extra miles, but we were out of the confused ocean swell that Ana had left us.  Thirty some hours after departing the Highlands, we dropped anchor behind Reedy Island just below the eastern entrance to the C&D canal.

If you have enjoyed the blog, please consider a small donation to support the endeavor. Thank you.
at May 29, 2015