Between Home and a Hard Place 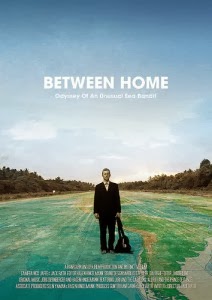 Last week I downloaded the sailing movie, “Between Home” [trailer here, download here], an exceptionally well filmed documentary of a young man's intrepid journey across two oceans and the continent in between. The movie, by Jack Rath, is about human endurance and self discovery and flirts along the way with bigger questions of home and place and life. Nick Jaffe, German and Australian, found himself in Berlin searching for clues about a father he never knew. At some point it seemed like a good idea to go back to Australia; not by expensive airliner, but by an inexpensive, barely fit sailboat; a boat he named "Constellation."

At first, of course, the scenes of sailing had me nearly doubled over in existential pain because my boat is not yet in the water. It's bittersweet to see a small boat sailing on the open sea as I want to be there with mine so badly. There are days when fear and doubt and land-locked angst creep across my brain like a nagging, oozing rash. Concentration fails me as I trudge from one project to another; all the while wondering if I can finish, if I want to, if the boat will be worth the effort, etc. Nick and Constellation ended up doing me a favor. 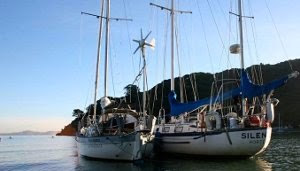 It seems that Nick had some debts when he left including buying the boat on credit. Early one morning, he turned sea bandit and left a British marina without paying off his bill. After crossing an ocean, in the midst of Caribbean paradise, Nick was worried about money. He had also to worry about his boat. Besides being excruciatingly broke, his boat needed repairs to make it across the Pacific Ocean. Rather than sailing on to Panama, the young captain decided to head to New York, home of his stepfather, to work and raise some money for repairs and the rest of the journey. Through the generosity of several Americans, including the boat yard he had wandered into, Constellation was re-rigged and brought closer to bristol fashion. Nick was able to truck the boat to California to start his Pacific crossing. This is an epic, two year story of determination and temerity. As I understand from KTL, all debts to mariners have been settled. Still it was an uncomfortable reality for Nick as he traveled. 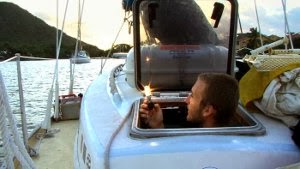 I'm still working on my boat which is high and dry on the gravel in a boatyard, but I'm feeling better about the whole project just now. My trip will be different. I am virtually debt free already and my boat, if I'm successful, will be stronger and ready for nearly anything. She'll be more capable than I at first. Some of the work I'm doing is inspired by Fred Bickum and his boat Fenix, who went all the way around the globe in a Cape Dory 28, same as mine. While I'm not that ambitious, my boat has benefited from the work Fred did on his. My boat will be strong, moderately equipped and well found. And for now, it seems my brain, and my heart, will have benefited from the work that Nick has done. It's slow going, hard work, and more than occasionally frustrating, but I'm doing it right. When I finally leave, I'll have not many worries more than the weather.